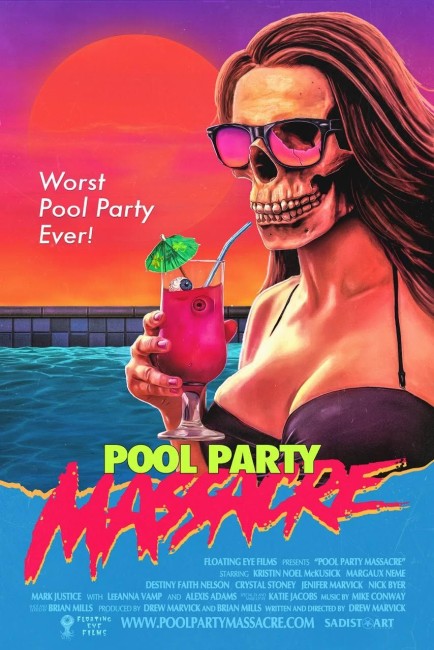 Bitchy Blaire Winthorpe’s parents go away on vacation. While they are away, Blaire decides to throw a pool party. Joining her are her childhood friend Nancy and her bitchy friends Britney, Jasmine, Kelly and Tiffany. The party is also later invaded by Tiffany’s boyfriend Troy and his obnoxious brother Clay. Also lurking around the house is a killer who starts slaughtering everybody using a variety of tools taken from the garage..

Pool Party Massacre is a directorial debut for Las Vegas-based filmmaker Drew Marvick. Before making Pool Party Massacre, Marvick had worked for some years in commercials, had worked as an associate with Ted V. Mikels, had made one short film, as well as several acting appearances in other low-budget horror films. When his friend, cameraman Brian Mills called to say he had a new camera and was looking for a project to try it out on, Marvick lied and said he had a new script called Pool Party Massacre and was then stuck with having to actually come up with one.

Made with the resources to hand and carried the rest of the way by a whole lot of over-the-top attitude, the result emerges as one of the most entertaining no-budget films ever made. The clear direction that Marvick has given each of the girls is to ramp the bitchiness up to eleven on the dial. The results are thoroughly hilarious – the Vinegar Stroke scene had me rolling in laughter in my seat

.The most entertaining performance in the film comes from Nick Byer who runs a frat rat obnoxiousness over everything and goes beyond anything the girls do to deliver a performance at around at least a seventeen on the dial. He even gets a scene where he, at length, voices the theory that has done the rounds of Reddit boards in recent years where Matthew Broderick in Ferris Bueller’s Day Off (1986) is just a Tyler Durden-like alter ego in Alan Ruck’s imagination.

Not to say that the comedy eclipses the horror aspect either. Marvick is a clear fan of the 1980s slasher film – the end credits include a thank you to “every 80s slasher film ever made”. Many of the despatches come in the same entertainingly over-the-top vein of the performances, most hilariously the scene with Nick Byer being killed while seated on a toilet whacking off.