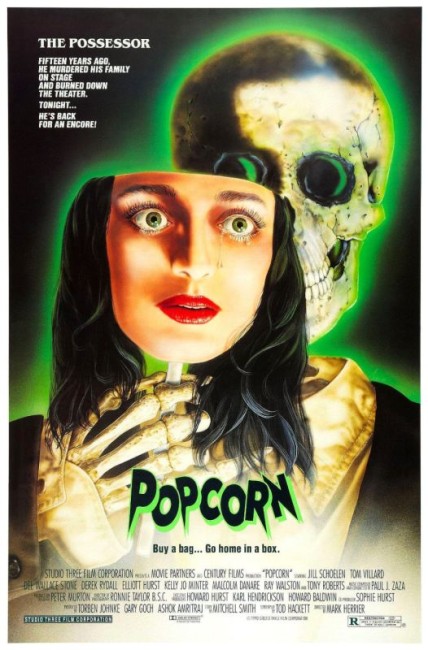 Maggie, a student at the University of Southern California film school, is plagued by recurrent dreams. The film department’s funding has just been cut but the department head comes up with the idea of holding a festival of old gimmick horror films in a soon-to-be-demolished theatre to raise funds. A film memorabilia expert shows them a film called ‘The Possessor’, which features occult sacrifices being conducted by Lanyard Gates, the guru of a film cult in the 1960s. Maggie is startled when the film shows things that appear in her dreams. As the festival begins, a masked killer starts killing off Maggie’s classmates.

Popcorn was the first genre entry that Bob Clark and Alan Ormsby produced in more than a decade. In the 1970s, Clark and Ormsby made such films as Children Shouldn’t Play with Dead Things (1972), Black Christmas (1974) and Dead of Night (1974). Inexplicably, they then took their names off the credits of Popcorn, with Alan Ormsby substituting the name Tod Hackett on the script and Bob Clark’s associate producer role going uncredited (although there is another unrelated Bob Clark responsible for the makeup effects). Why Ormsby and Clark removed their names is not known – however, it could hardly be the catch-all of creative differences as Popcorn is a surprisingly good film.

Popcorn comes with a great affection for the lost pleasure of cinema-going – it even screens old refreshment ads. In particular, it has affection for the old gimmick films of the 1950s. Many of the gimmicks used in the film – the mosquito winched across the theatre, insurance policies against dying of fright, electric buzzers on the seats, odours pumped into the theatre – are directly taken from the gimmicks that William Castle used in the 1950s. [The respective films are Macabre (1958), House on Haunted Hill (1959) and The Tingler (1959). The only difference is that Castle winched a skeleton instead of a mosquito across the theatre in House on Haunted Hill and the Odorma gimmick is from another non-Castle film called The Scent of Mystery (1960)].

Moreover, Popcorn has a great affection for the old films being screened. The audience in the film’s theatre may be howling in laughter, shouting derision and throwing popcorn at the screen but the film plays its recreations with great affection and style, far more so than most genre film parodies/farces. The Mosquito segment in particular comes wonderfully attuned to the dialogue, the deadpan seriousness, the pretensions and the stiffly posed nobility of 1950s science-fiction films. Similarly, the Attack of the Amazing Electrified Man segment captures the black-and-white mood of 1940s monster movies well, as the brief glimpses of The Stench does of Japanese monster movies.

If anything, the film has a contempt for today’s audiences – the denouement of the film where the audience cheers the maniac on and to whom the heroine’s screams only spur them on to greater applause holds an oblique comment about the undiscriminating bloodthirstiness of contemporary audiences.

The modern slasher-styled sequences, which are skillfully combined with the film recreations, are staged with a rare attention to lighting and mood. The makeup effects are good – the maniac’s burnt face with what look like metal pins holding it together is creepy and there is one great effect where a girl kisses Tony Roberts and pulls his face off in her lips.

The story is a tad contrived – it is set up to suggest that Lanyard Gates is the killer but then pans out that the killer is someone else altogether who fits into the contorted Lanyard Gates schema. The other minor annoyance about the film is its film students – neither the director nor the screenwriter give the impression of ever having attended a film school. The film school students here are portrayed as the usual bunch of hijinking frat rats and party bimbos that litter the Friday the 13th and Elm Street films, not at all like the film school students in one’s experience who have all been heavily absorbed in their own artistic visions-come-pretensions. The script does give them a few amusing lines, one student at one point protesting that there is more social relevance in one Police Academy film than all of Ingmar Bergman!!