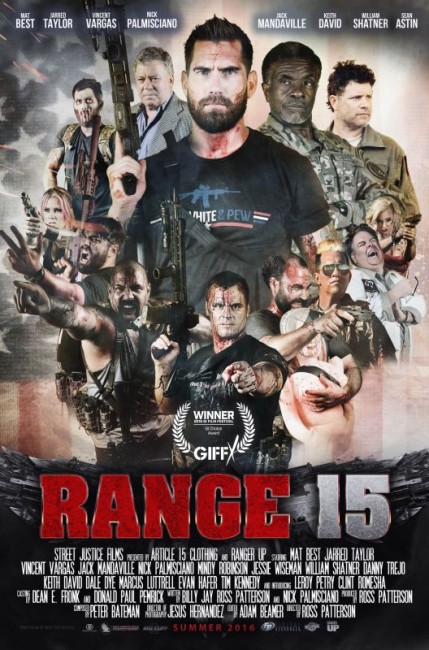 Just released from military service, Mat Best and several friends go out on a night of wild partying and end up spending the night in jail. They are released the next morning to find that the zombie apocalypse has occurred. They arm themselves and gleefully set out to eliminate zombies, joined by two girls Heather and Eliza. After accidentally discovering that a whiskey that has been laced with viper semen causes the zombies to revert to normal humans, they set out to deliver a crate of the whiskey to Colonel Holloway, the commanding officer at the nearby military base. He assigns crazed hotshot hero Gene Vandenham to personally deliver the crate to the top secret testing site at Range 15 with them acting as back-up. With Vandenham sacrificing himself along the way, that leaves Mat and his friends to complete the mission through zombie-infested territories.

Range 15 is a zombie film with an interesting background. It was put together by Ranger Up and Article 15, companies run by US armed services veterans that specialise in the sale of military clothing. They felt that the portrayal of military in cinema had been wildly inaccurate, showing most soldiers as Neanderthal idiots or psychopaths, and that they wanted to make a film that portrayed them as real people. After turning to crowdsourcing site Indiegogo, they raised a million dollar budget in what was purportedly one of the most popular campaigns on the site. The film was cast using military veterans, many of whom play characters with the same names as themselves. The added budget allowed the addition of several name actors such as Keith David, William Shatner, Sean Astin and Danny Trejo, along with other celebrity veterans such as MMA fighter Tim Sullivan and Marcus Luttrell, the Navy SEAL whose true-life book became the basis of Lone Survivor (2013).

I find the logic behind Range 15 to be bizarre to say the least. In terms of ambition, the idea is an interesting one; in terms of execution however, the film is a disaster. Most glaringly is that in order to create a film that depicts military characters as real people, the first thing the filmmakers set out to do is make a zombie film! We’re not talking here about a work of harsh survival with people fighting to the bitter death a la The Walking Dead (2010– ) but a zombie comedy that is about as ridiculously over-the-top as it is possible to get. Surprisingly enough, similar things had been done before with the substantially better Navy Seals vs Zombies (2015), which did use some real military vets but played itself seriously.

In terms of portraying the military accurately, it is also difficult to get a grasp on the filmmakers’ logic. Almost certainly, what they were referring to when they talk about a realistic portrayal is the way the soldiers operate in combat and handle their arms. I have no military experience so I don’t feel qualified to comment on the authenticity that comes across here. As to whether we get a credible portrait of soldiers and the way they act as people, I can assume the veterans acting in the film were okay with this and what is on screen is a fair representation of the way they are in real life. In which case, all that one can only say the US military is in a very sorry state and that the reality is even worse than the cliches of brutish Neanderthals and psychopaths with guns that the filmmakers were seeking to dispel.

I had previously though that the Australian comedy Me and My Mates vs. the Zombie Apocalypse (2015) was the crassest zombie film ever made by but Range 15 easily outstrips this on all fronts. Within the first five minutes of the film, the depiction of the servicemen we get is as drunken hellraisers, making out with drag queens, pissing up against cars, engaged in bar fights and being arrested. The end of the world is one they actually greet as an opportunity for more hijinks – “I think our wildest dreams just came true – the motherfucking zombie apocalypse,” they cheer upon being released from the cells.

One of the team (Jack Mandaville) goes the entire way through the film, including into combat, with an inflatable rubber sex doll glued to his crotch. We get montages of Jarred Taylor eating pie and then smearing it over himself, while a stopover at the military base has the men high-fiving him for the number of hotdogs he manages to cram into his mouth at the same time. Vincent Vargas has a scene where he is found sexually relieving himself with a zombie girl he encounters at a gas station (which I suppose does raise the interesting question of whether a zombie can give consent).

The dialogue the entire way through has been written not in terms of a realistic depiction of soldiers in combat but writers trying to find the opportunity to slide in as many sarcastic one-liners and smartass insults they possibly can. “Is there any dialogue between you that doesn’t involve homosexual undertones?” Mindy Robinson asks. “Not one single line,” replies Mat Best. The two girls who join the group fail to go through a single scene where the guys are not slavering over them and making some crude sexual innuendo or where Mindy Robinson gets to make some sarcastic putdown about how Jarred Taylor is too fat for her to date. The characters are constantly breaking the fourth wall “time for a gear-up montage” or “If this was a zombie movie, you’d be killed about right now.”

There are times where the characters, if they are intended as a realistic portrait of soldiers in combat and given that the actors playing them are actual veterans, leaves you wondering about the sanity of the soldiers in the field today. A lot of the combat scenes involve them just rushing in and shooting up everything in the way without asking questions. One of the group gets his dick ripped off by a zombie dwarf and rather than rush in and try and help, all the others do is stand around cracking dick jokes.

And then there are scenes where you realise that the soldiers present are actually psychopathic madmen with guns (or at least enacting gun-toting fantasies). In one scene, they enter an abandoned convenience store and encounter a guy helping himself who compares Jack Mandaville to Randy Quaid, whereupon an offended Mandaville shouts “Randy Quaid’s an American legend” and shoots the guy. Elsewhere, the troupe accidentally wander into a house and find it inhabited by hipsters and exit after throwing a grenade into the room. In another scene, they come across two nerds defacing a flag and this is followed by a mock-up of Pulp Fiction (1994) with lookalikes of John Travolta and Samuel L. Jackson bursting in and shooting them.

The most disturbing scene is where the group meet a new team and are preparing to join them on a mission just as Jessie Wiseman turns up and asks the perfectly valid question of why the newcomers are being referred to as heroes whereupon one of the men casually pulls out a handgun and just shoots her in the head. Perhaps the most offensive scenes are those with Mary Dague, in real-life a bomb technician who had both her arms blown off by an IED in Iraq, whose state of limblessness only serves for a series of jokes involving Mat Best having sex with her behind a dumpster and a scene where a set of keys are tossed to her and she is left scrabbling around trying to pick them up with her stumps.