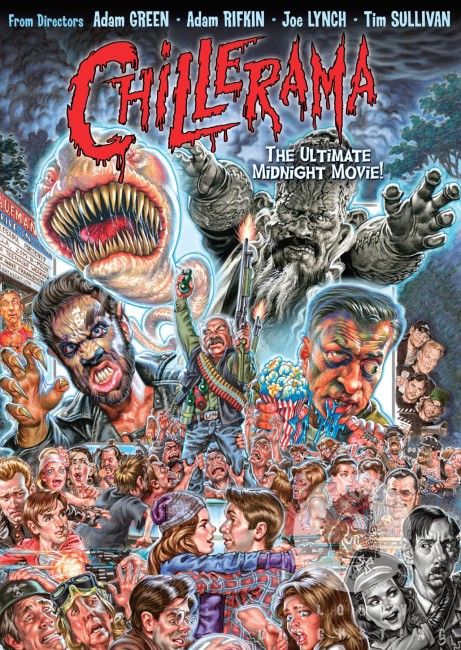 I Was a Teenage Werebear

The Diary of Anne Frankenstein

It is the last night before the closing of the Chillerama drive-in theatre. Crowds gather as owner Cecil Kaufman promises a triple-bill of rare horror films. However, the projectionist Floyd has dug up the corpse of his wife. While attempting to have sex with the corpse for the years of misery he endured while married, she comes to life and bites his testicles off. Floyd staggers away to work, visibly unwell, emitting a blue goo that spills inside the popcorn butter. Wadzilla:- It is the 1950s. Miles Munson is diagnosed with having a very low sperm count. Dr Weems gives him the new experimental drug Spermoprazine to help increase it. This causes Miles to feel great pain whenever he becomes aroused and enlarged sperm to erupt from his penis. While out on a date, he becomes exicted and goes to the bathroom to jerk the sperm out but it grows to monstrous size, devouring all in its path as it rampages through downtown New York. I Was a Teenage Werebear:- 1962. Rick O’Reilly is dating Peggy Lou but finds his eye constantly wandering towards other guys. His meets Talon, the new kid at school, and the two realise an attraction for one another. As Ricky struggles with this, Talon bites his ass during a wrestling match. This causes Ricky to become a werebear – a muscly, bare-chested and hairy fanged creature – just like Talon and his gang. The Diary of Anne Frankenstein:- As the Frank family hide in an attic from the Nazi round-up, young Anne finds her grandfather’s diary and learns that they had to change the family name from Frankenstein because of his abominable experiments. They are then arrested by Adolf Hitler who confiscates the diary. Hitler becomes determined to complete the Frankenstein experiments and succeeds in bringing to life a patchwork creature made up of body parts. He wants the creature to become his killing machine, however it proves too cuddly for these purposes. Zom-B-Movie:- People everywhere at the drive-in are being turned into zombies by the infected popcorn. It is young Toby’s desire to declare his love for Mayna and lose his virginity before they are all killed.

Perhaps inspired by what Quentin Tarantino and Robert Rodriguez attempted to do in Grindhouse (2007) – see Death Proof (2007) and Planet Terror (2007) – Chillerama is a similar attempt by a group of filmmakers and friends with entrenched feet in the horror genre to make a tribute to the great American tradition of the drive-in movie. Chillerama comes with tongue planted far more sarcastically tongue-in-cheek than Grindhouse ever did. Indeed, you could argue that Chillerama is a far more authentic upholder of the grindhouse tradition that Tarantino and Rodriguez mounted. The filmmakers take an enthusiasm for B horror movies and plant their respective tongues firmly in cheek. Unlike most anthologies where the segments come from different hands, the fast and sarcastic tone of the film, not to mention the adult sense of fratboy humour, is remarkably consistent throughout Chillerama.

The filmmakers in question are Adam Rifkin, Tim Sullivan, Adam Green and Joe Lynch. Adam Rifkin made horror films such as The Invisible Maniac (1990), Psycho Cop Returns (1993), had an almost-cult hit with the bizarre The Dark Backward (1991), conducted a modest mainstream venture with Detroit Rock City (1999), made the interesting documentary Welcome to Hollywood (1998) and the caveman comedy Homo Erectus/National Lampoon’s Stoner Age (2007) and the completely whacked meta-fictional stalker film Director’s Cut (2016), as well as wrote the scripts for Mousehunt (1997), Small Soldiers (1998), Zoom: Academy for Superheroes (2006) and Underdog (2007). Tim Sullivan made his directorial debut with the Eli Roth produced 2001 Maniacs (2005) and went onto Driftwood (2006) and 2001 Maniacs: Field of Screams (2010), as well as wrote an episode of Snoop Dogg’s Hood of Horror (2006). Adam Green has been a rising name since the slasher homage Hatchet (2006), which he followed with Frozen (2010), Hatchet II (2010), Hatchet III (2013), Digging Up the Marrow (2014) and Victor Crowley (2017). The relatively unknown name among these is Joe Lynch whose only previous genre work was Wrong Turn 2: Dead End (2007), although he did subsequently go on to make Knights of Badassdom (2013) and the darkly funny Mayhem (2017). All four filmmakers can be seen sitting together in a theatre in the film’s final scene offering up comments about the film.

Wadzilla kicks in with an entertaining absurdity. You get the impression that Adam Rifkin has intended it as the logical companion piece to the Are the Findings of Doctors and Clinics Who Do Sexual Research and Experiments Accurate? of Woody Allen’s Everything You Always Wanted to Know About Sex * But Were Afraid to Ask (1972) with its giant rampaging breast. Like Are the Findings …, Wadzilla has also been construed as a parody of 1950s monster movies. The tone of the film is similar to the cod deadpan B-movie prose of Larry Blamire’s films – The Lost Skeleton of Cadavra (2001), Trail of the Screaming Forehead (2007).

There seems nothing more appealingly ridiculous than scenes of the military trying to trap the giant rampaging sperm by dropping a massive condom down onto it by helicopter or of the sperm having daydreams of the Statue of Liberty turned into a stripper and then trying to hump the statue. There is the sheer absurdity of the initial scenes with the hero (Adam Rifkin) fighting with the sperm as it demolishes a bathroom and erupts from a toilet after he tries to flush it, or he trying to drag it out as it tries to bury itself up the skirt of his date (Sarah Mutch). Despite the segment’s deliberately cheesy look, the rampaging sperm scenes contain some sophisticated effects.

Tim Sullivan’s I Was a Teenage Werebear is his take on I Was a Teenage Werewolf (1957) and the various Gidget and Beach Party movies of the early 1960s – all with an amusingly gay spin. (Sullivan, who can be spotted in the segment as the phys ed coach, is a gay filmmaker himself. It is not that queer filmmakers have not taken to all the homoerotic undertones in the Beach Party film before as witness Psycho Beach Party (2000), which discovered tranny dramas inside the genre).

The rather amusing joke that I Was a Teenage Werebear offers up is that when the young hero is bitten by a werewolf, he turns into is a ‘bear’ – a hairy macho gay man dressed in studded leather briefs. The episode comes with songs that have hilarious lyrics “I’ve got a feeling I’m going to explode/How much longer do I have to hold my load?” We even get a gay-themed parody of the famous “even a man who is pure in heart …” speech from The Wolf Man (1941). Certainly, while Wadzilla looks professionally produced, I Was a Teenage Werebear gives the impression it was shot on a low budget – the coach’s office and the nurse’s sickbay are simply tents that have been pitched on the beach.

The Diary of Anne Frankenstein, which conducts a mash-up between a parody of a 1940s Universal Frankenstein sequel and the famous The Diary of Ann Frank (1947), the true story of a Jewish girl and her family hiding in an attic from the Nazi concentration camp round-ups, is an outrageous idea that takes you aback with its sheer bad taste. The segment becomes even more outrageous when it comes to Adam Green regular Joel David Moore’s absurdly over-the-top comedic caricature of Adolf Hitler. (The outrage is allayed somewhat in that director/writer Adam Green is himself of Jewish background). Interestingly, the Frankenstein monster is taken closer to the legend of The Golem – see The Golem (1920) – and is resurrected from the body of a rabbi and raised to life with energy from a menorah rather than the traditional electricity. In all, this is an extremely silly episode – so silly that you have to enjoy it for its preposterousness.

Zom-B-Movie is a variant on the zombie film of which the latter half of the 00s has produced a vast number. Joe Lynch has fun – planting his tongue in cheek, as many other recent zombie films have done. There is an undeniable degree of outrageous fun – these zombies seem to prefer having sex rather than devouring the living. Brendan McCreary is outfitted with amusingly self-reflexive lines such as where he decides he must be the Final Girl or wonders: “What would Simon Pegg do? No, too British. Ken Forree?” Ultimately, this is perhaps the weakest of the film’s four episodes, the over-familiarity of the territory in recent years having used up all that is fresh about the genre.