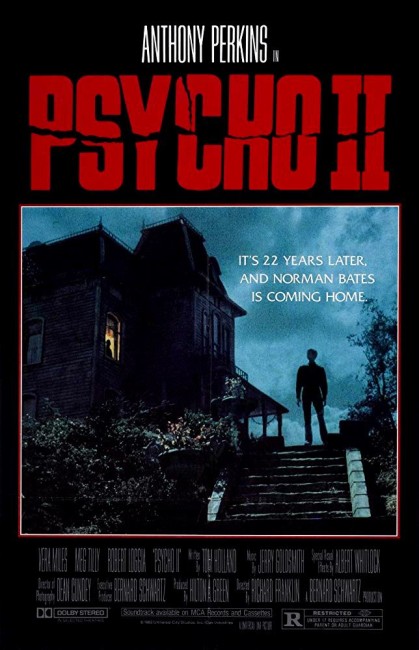 After twenty-two years, Norman Bates is deemed sane and released from the asylum. He returns to live at the motel, while taking a job at a local diner. He befriends Mary Samuels, a young waitress also working at the diner, and lets her move into the house with him after she and her boyfriend split up. Norman then suddenly starts receiving phone calls and notes from his mother. These are followed by a series of murders. Norman is unable to tell whether he is going crazy or there is somebody behind this.

Alfred Hitchcock’s Psycho (1960) is one of the most influential films ever made. Purportedly more term papers are written about Psycho in film school than any other film. Psycho not only inspired numerous copies but it brought the modern horror out of the Gothic darkness of the 1930s and 40s and into a world of twisted Freudian psychology and screwed-up Puritanical sexuality that has remained a fundamental undertow of the psycho-thriller ever since.

Alfred Hitchcock passed away in 1980 and that seemed to act as signal that it was okay to approach the sacrosanct territory of sequelising Psycho, probably something Hitchcock would never have okayed in his lifetime. Two Psycho sequels were first announced within less than a year of Hitchcock’s death and both emerged in 1983 – this film sequel, as well as Psycho II (1983), an unrelated novel by Robert Bloch, author of the original book that Psycho was based on.

This film would be followed by a host of other Psycho spinoffs, including Psycho III (1986), the cable-movie Psycho IV: The Beginning (1990), both with Anthony Perkins, a loosely related tv pilot Bates Motel (1987) that never sold, Gus Van Sant’s bizarre shot-for-shot remake of the original Psycho (1998), Hitchcock (2012) about Alfred Hitchcock and the making of the original and the tv series Bates Motel (2013-7) starring Freddie Highmore, a modernised version that tells the story of Norman Bates’s childhood.

Psycho II makes an impressively scrupulous attempt to sequelise such a legendary work. It brings back both Anthony Perkins and Vera Miles from the original. Oscar-winner Jerry Goldsmith replaces the late Bernard Herrmann on score. The director was the Australian Richard Franklin. While a student at the University of Southern California film school in the late 1960s, Franklin invited Alfred Hitchcock in for a Q&A session. The two struck up a friendship and Hitchcock invited Franklin to visit him on the set of his last movies and became a mentor of sorts to him. In a nice touch, the Meg Tilly part here was originally offered to Jamie Lee Curtis, who had just had some success as the heroine in Halloween (1978). Jamie Lee Curtis was of course the daughter of Psycho‘s original shower victim Janet Leigh. Alas, this never happened as Jamie Lee announced she was sick of slasher movie typecasting and refused any more genre roles, and the part was recast with Meg Tilly, who does a fine job.

Psycho II is a sublimely clever effort, sometimes a little too much so for its own good. Tom Holland’s script is full of sly subtleties and often haunting dialogue. It is a script that gives the audience a considerable workout in the sharp twists and turns it convolutes through. The ending holds a last neatly black surprise just when one thought the film had finished.

Anthony Perkins soups up his range of expressions – the film certainly casts him a more heroic role this time around. He is creepy in his twitchiness and yet at the same time the two decades has allowed his boyishness to mellow into something inordinately likeable.

Director Richard Franklin has learnt well from the master. Franklin exactingly restages and quotes scenes from the original – the shower murder, Arbogast’s murder on the stairs and the venture down into the cellar – but at the same time wittily subverts their familiarity. The new shocks he delivers have a classical orchestration that move with everything the contemporary slasher cycle didn’t. Certainly, the violence is far more explicit and bloody than Hitchcock would have ever allowed in one of his films.

The design team do a superb job of recreating the house in a perfect facsimile detail for detail to the original. Even the camerawork is determined to show off its cleverness with the use of massive wide-angle aerial shots and reflections off door handles.

Richard Franklin made a number of other films of genre interest are:– Patrick (1978) about a psychic comatose patient; the excellent Hitchcock-influenced psycho-thriller Roadgames (1981); the children’s film Cloak and Dagger (1984); the killer chimpanzee film Link (1986); and the yachtboard ghost story Visitors (2003). Franklin has also directed a reasonable amount of tv, including the pilots for genre series such as Beauty and the Beast (1987-90) and The Lost World (1999-2000).

Screenwriter Tom Holland delivered a number of other genre scripts including The Initiation of Sarah (1978), the revenge drama Class of 1984 (1982), the transformation film The Beast Within (1982), Cloak and Dagger, Michael Winner’s psycho-thriller Scream for Help (1984) and the story for the remake of Fright Night (2011). Holland subsequently went onto direct the vampire film Fright Night (1985); Child’s Play (1988), which started off the Chucky franchise; the psycho secretary tale The Temp (1993); and the Stephen King adaptations The Langoliers (tv mini-series, 1995), Thinner (1996) and Rock, Paper, Scissors (2017).