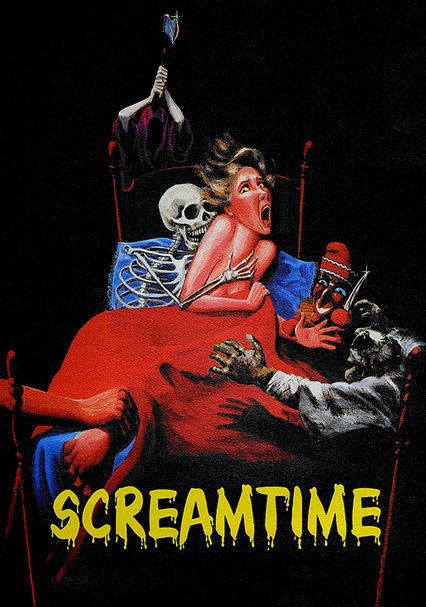 Ed and his friend Bruce steal some videotapes from a videostore and go to Ed’s girlfriend Marie’s place and insist on sitting down to watch them. 1:- Jack Grimshaw’s love in life is the Punch and Judy show he puts on for children. His wife Lena is sick of his obsession and wants him to give the puppets up so that they can move to Canada. When her insolent son Damien sets the puppet show on fire, the puppets take a nasty revenge. 2:- Newlyweds Tony and Susan Kingsley move into a house they have bought. Soon after moving in, Susan starts seeing ghostly phenomena. 3:- Gavin Martin takes a job gardening for two elderly ladies who insist that fairies and gnomes live in the garden. After observing the ladies taking money to pay him out of a chest, Gavin makes plans with his friends to break in at night and steal the chest. However, a surprise is in store for them as the fairies and gnomes come to life to protect the house.

Michael Armstrong was an English director who made a couple of horror films with The Haunted House of Horror (1969) and Mark of the Devil (1970). Screamtime was the only other film he directed, although he substituted the pseudonym Al Beresford. He did write a number of other films, including several 1970s British sex comedies, the most famous of these being The Ballad of Eskimo Nell (1975). He occasionally returned to write genre material, delivering the screenplays for Mark of the Devil Part II (1972), House of the Long Shadows (1983) and Psychosis (2010).

The horror anthology was at a peak during the early 1970s with efforts from Amicus films beginning with Dr Terror’s House of Horrors (1965) through to From Beyond the Grave (1974). The Amicus-modelled horror anthology had its imitators but it died away by the end of the 1970s, along with the rest of the English horror cycle. There were brief fitful attempts to revive the genre with The Monster Club (1980) from one of the Amicus producers and Hammer venturing into the tv anthology with Hammer’s House of Horrors (1980) and Hammer House of Mystery and Suspense (1984).

Though, Screamtime is backed by an American company, Manson International who were responsible for a number of exploitation films between the early 1970s and 1990, it is clear that Michael Armstrong has been given orders to go away and replicate an Amicus-styled horror anthology – the film is notedly shot in England and features an all-British cast. Apparently, the stories were originally three 40-minute short films shot by Armstrong, respectively called That’s The Way To Do It, Dreamhouse and Do You Believe In Fairies? (although no titles are given to the episodes in the film). These were brought up by Manson International, packaged together and edited down to into a 90-minute feature. This is presumably why Armstrong chose to substitute a pseudonym.

The wraparound is a negligible story. Uncouth youth Vincent Russo steals some videotapes and insists that he go to his girlfriend Maria Scinto’s flat to watch them. She spends the entire time making eyes and giving the come on signal to his friend Michael Gordon. Nothing much else happens.

The first episode with Robin Bailey as a middle-aged puppeteer is the best of the stories. Bailey gives a fine performance that gets the feel of a frail old man clinging to the one thing he has in live with enormous conviction. Who has not pursued any artistic endeavour and cannot feel a twinge of pain as his wife (Ann Lynn)’s demands he throw the puppets out for her and the torments of his stepson Johnathon Morris, culminating in him burning the puppet theatre. There are the inevitable scenes where just desserts are enacted. Armstrong does quite a good job of making the essentially immobile hand puppets look threatening, all accompanied by an unsettling high-pitched voice.

The second episode is a more standard haunted house story. This is nothing terribly standout. Armstrong fails to generate anything but the most rudimentary atmosphere. A scene where Yvonne Nicholson opens a door and sees a figure run by holding a knife fails miserably because the camera set-up in the scene does nothing to create any effect. There is a certain intensity generated in the all-out assault on Nicholson towards the end of the episode. Veronica Doran as the medium brought in who walks through the house with blithe assurance reminds of the more comic portrait by Margaret Leighton in the Amicus anthology From Beyond the Grave. One oddity is the ending where it is revealed that the family Yvonne Nicholson was seeing haunting her in her visions moved in after they were driven out.

The silliest of the stories is the third episode. The set-up of a youth getting a job with two old dears who insist that there really are fairies in the garden and that the gnomes are alive has a quirkiness to it that could have made for something amusing but it fails to emerge. The story is slow and padded with too much preamble. The inevitable scenes with the youths being attacked by dwarf actors dressed as garden gnomes and a series of poorly animated fairly lights look cheap and unconvincing.