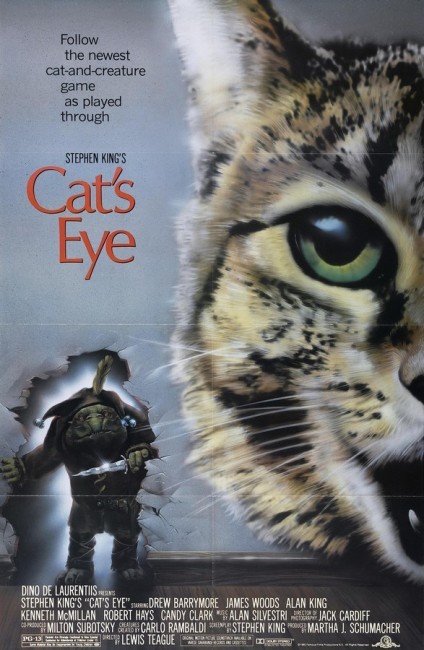 A cat follows the ghostly image of a little girl across the country, wandering into several strange situations along its journey: Quitters Inc:- An executive discovers Quitters Inc, a company that promises to cure his cigarette smoking with Mafia-styled tactics – if he is caught lighting up, his wife and daughter will be made to dance on an electric hotplate and their fingers severed. The Ledge:- Millionaire Cressner has discovered that penniless tennis bum Johnny Norris is having an affair with his wife. Cressner offers Norris a sporting bet – if he can walk around the narrow ledge surrounding his penthouse apartment he can have his wife. The General:- Ten-year old Amanda befriends the cat, which sits on her bed protecting her from a goblin that comes to steal away her breath. However, Amanda’s mother is determined to have the cat removed.

Cat’s Eye is an anthology derived from several Stephen King stories. (Indeed, the film often seems a giant Stephen King in-joke – the cat ends up being chased by a St Bernard, nearly run over by a 1958 Plymouth Fury and every time a character turns on a tv set or picks up a book it is a Stephen King work).

Cat’s Eye was made by director Lewis Teague who had previously adapted King’s Cujo (1983) and produced by Dino De Laurentiis, who made a number of Stephen King adaptations around the time, including being the guilty party that allowed King the opportunity to direct with Maximum Overdrive (1986). The film is co-produced by Milton Subotsky, one half of the team behind UK’s Amicus Productions, who purchased the rights to the Stephen King short story collection Night Shift (1977) and announced an anthology of King stories back in 1977, where he would have been one of the second people to have made a King adapted film

Cat’s Eye is of mixed success. The short story version of Quitters Inc, which can be found in Stephen King’s Night Shift (1977) collection, is a wonderfully black comic piece, filled with a Roald Dahl-ish glee. However, King’s treatment of it here is flaccid with he and Lewis Teague failing to capture the manic glee that was present in the story. There is a single sequence where James Woods hallucinates giant ambulatory cigarettes to the accompaniment of The Police’s Every Breath You Take (1983) at a party – a song so perfectly suited it could have virtually been written for the film – but the rest of the film plays the gag far too straight. James Woods seems embarrassed by proceedings and Alan King gives a performance that is an embarrassment. Quitters Inc later underwent an uncredited remake as the Bollywood film No Smoking (2007).

The Ledge is the best of the segments. Again, the original story (also to be found in Night Shift) is a blackly comic gem and here King and Lewis Teague do capture some of the story’s malicious sense of humour. Lewis Teague milks Robert Hays’ journey around the ledge for some suspense. Although, there is an irritating tendency on Teague’ part to overblow the drama – adding exploding neon signs and with Robert Hays left hanging from and the like. The story is tight enough on its own to work without needing to blow it up.

The General is the only story original to the film. It seems like an outtake from Gremlins (1984), which had been a huge success the previous year. However, this is where Cat’s Eye works best, particularly in its marvellous climactic battle between cat and goblin amid scaled sets. The segment should be seen for the single literally ‘breath-taking’ process-shot with the goblin sitting on the slumbering Drew Barrymore’s chest stealing the breath from her mouth. Again, there is the tendency toward overkill and Candy Clark’s overacting in the segment gets a little too much.

Cat’s Eye is largely a disappointing film. The adaptations seem lumbering – they lack the lightness of step they had on the page – you could almost imagine Stephen King laughing himself to tears at the hilarity as he wrote the originals. The linking story is also forced – one never finds out exactly what significance Drew Barrymore’s ghost is meant to have. In all, one of the more mediocre of Stephen King film adaptations.