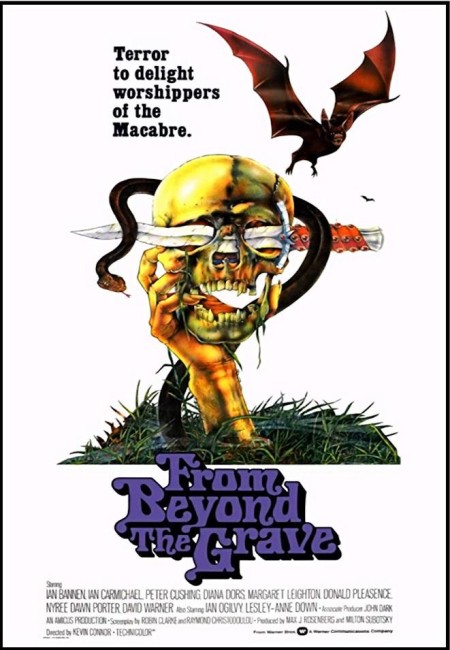 An antique store proprietor promises a little ‘something extra’ with everything he sells. 1:- Edward Jeffries buys a mirror for his apartment. One evening, he has the urge to hold a seance. There he is possessed by a man in the mirror who uses Jeffries to lure girls to the apartment and sacrifice them so that he might gain physical form again. 2:- Hen-pecked husband Christopher Lowe befriends a street peddler and begin an affair with the man’s strange daughter. The daughter shows him how he can use a voodoo doll to get rid of his nagging wife. 3:- A man encounters the batty old Madame Orlov on a train who tells him he has an elemental spirit on his shoulder. When he finds himself strangling his wife, he is forced to call upon Madame Orlov’s services to exorcise the spirit. 4:- A man buys an antique door and finds that it opens back into the era of Charles I.

This is in fact one of Kevin Connor’s best films and he demonstrates exceptional directorial style. Particularly good are the seance scenes in the first episode where Connor conducts some inventive 360o pans with a candle that explodes between a flickering flame and a jet in the foreground. The murders in this segment are vividly staged with Connor creating some marvellously sinister images of David Warner standing about in bloodstained clothes and a wrecked apartment.

The second and third stories go for a much more tongue-in-cheek tone. The second is a veritable EC Comics tale – in fact, is a more successful EC-type story than Amicus’s two actual EC adaptations, Tales from the Crypt (1972) and The Vault of Horror (1973), were. The second episode has a particularly strong cast in weak-willed Ian Bannen; Diana Dors, who is having the time of her life playing it up as the wife; and a decidedly offbeat Donald Pleasence and his very, very weird real-life daughter Angela.

The third episode is played entirely for laughs. The exorcism scenes are a wonderfully over-the-top pyrotechnic show after which it surely seems impossible to watch The Exorcist (1973) with a straight face again. Margaret Leighton’s performance as the batty old exorcist is side-splitting.

Where in most anthologies there usually tends to be some stories that are weaker or stronger than others, this is one occasion where all four stories are equally strong. The only failing is the weak linking story, which has to contrive to introduce antique objects that have no other purpose in the episode other than to wind in the second and third stories. The linking story also contains an awkward performance from the usually great Peter Cushing.

From Beyond the Grave was the directorial debut of Kevin Connor who later became a genre regular. Connor next directed Amicus’s trilogy of lost world Edgar Rice Burroughs adaptations, The Land That Time Forgot (1974), At the Earth’s Core (1976) and The People That Time Forgot (1977), and one original lost world film Warlords of Atlantis (1978), all starring Doug McClure; the Arabian Nights fantasy Arabian Adventure (1979); the cannibalism black comedy Motel Hell (1980); and the Japanese ghost story The House Where Evil Dwells (1982). These days Connor directs for tv, making such unexceptional true life soap opera fare as Diana: Her True Story (1993), Liz: The Elizabeth Taylor Story (1995), Mother Teresa: In the Name of God’s Poor (1997) and Mary, Mother of Jesus (1999). Among Connor’s genre tv fare is:- Goliath Awaits (1981), an interesting tv mini-series about a society that has survived in a sunken ship; The Return of Sherlock Holmes (1987), which brought the famous sleuth into the present-day; the Indian adventure The Mysteries of the Dark Jungle (1991); the stalker thriller Shadow of Obsession (1994); the Egyptian archaeology adventure The Seventh Scroll (1999); the Christmas fantasies Santa, Jr. (2002), A Boyfriend for Christmas (2004) and Annie Claus is Coming to Town (2011); the Hallmark adaptation of Frankenstein (2004); and Chasing Leprechauns (2012).