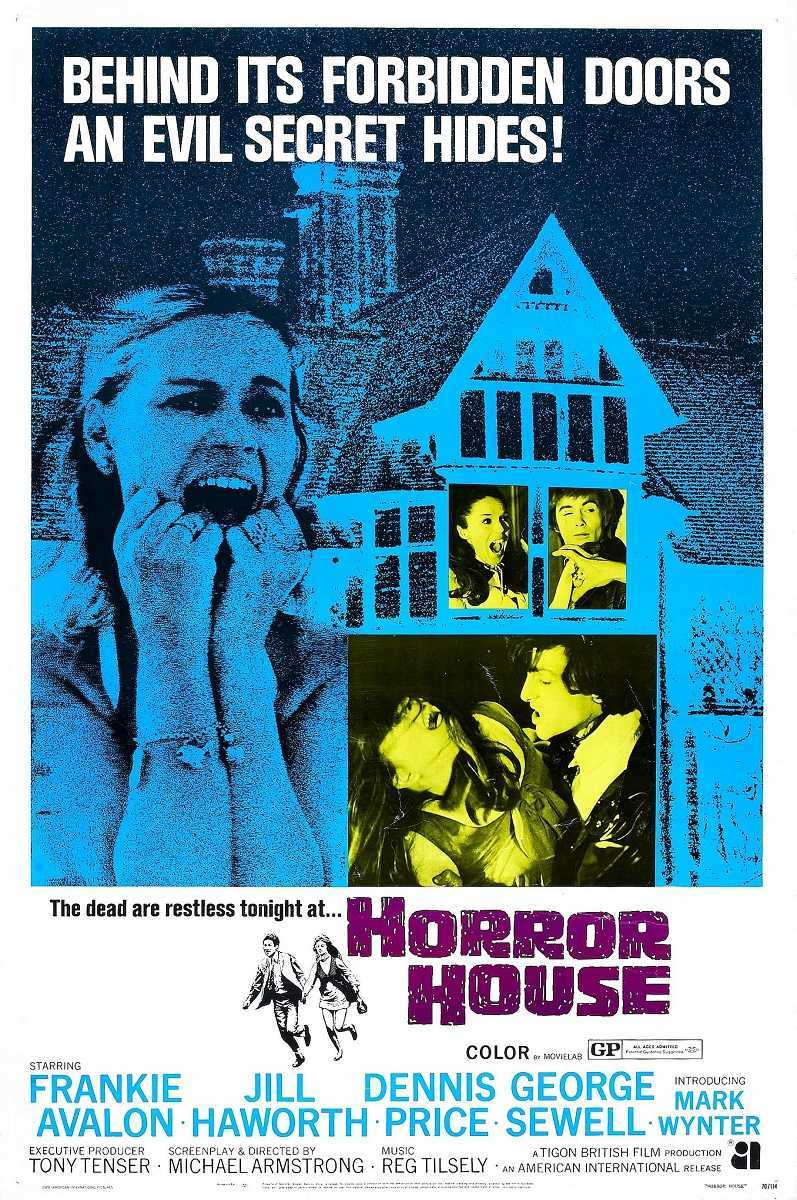 aka The Dark; Horror House

A group of friends at a party in London decide to go to an old, deserted, reputedly haunted mansion. While they are investigating, one of the group Gary is stabbed to death. Realizing that the murderer could only be a member of their group, the others decide to bury the body and keep quiet about what happened. After Gary is reported missing and the police begin an investigation, pressure comes on the group to return and find out who the killer is.

The Haunted House of Horror was one of the films from Tigon British, a production company that made a few forays into the horror genre in the 1960s and 70s, attempting to exploit the market that had been opened by Hammer Films. It was the first film from Michael Armstrong, who the following year would go onto make the notorious Mark of the Devil (1970).

The Haunted House of Horror is a venture into the Old Dark House genre (that is to say stories set in gloomy mansions featuring mundane, non-supernatural menaces like mad killers and murder plots from greedy relatives etc). The Haunted and Old Dark House genres were oddly two themes that Hammer never exploited during their two decade domination of the English horror cycle – perhaps it was that the ghost story and the Old Dark House genre, which grew out of the Broadway comedies of the 1920s, was regarded as too creaky by them.

The few Old Dark House films that did emerge during the Anglo-Horror cycle – Hammer’s one entry with the remake of The Old Dark House (1963) and efforts from other companies such as The Horror Of It All (1964) and The House in Nightmare Park (1973) – invariably played themselves as comedies. The Haunted House of Horror was notably the only Old Dark House film during this time that played itself for thrills rather than laughs.

Michael Armstrong offers the novelty of trying to feed the Old Dark House genre through the Swinging 60s London set. Like the later slasher genre, he also offers up a youth cast as victims. All of which does offer some interesting suggestions as to the directions that the Old Dark House genre may have taken towards updating itself. Mindedly, in attempting to tap the pulse of its times, the film promptly shoots its credibility in the foot by offering up 1950s teen idol Frankie Avalon, star of the Beach Party movies, as representative of Swinging 60s cool – in a much more interesting casting choice, Michael Armstrong had apparently attempted to cast David Bowie, but was overridden by AIP.

Alas, the film on display belies the title on both regards – there are no haunted or even any supernatural elements in the film, it is an entirely mundane psycho-thriller; and in terms of horror description, there is little that Michael Armstrong manages to generate that is of an horrific nature. The atmosphere is dull and slow. Some time in – at around the half-hour mark – Michael Armstrong throws in a gory knife attack, which proves an effective jolt after such slow atmosphere. Just when one thinks the film is finally about to pick up, the great disappointment is that that is it. There are no other killings, almost nothing happens up until right at the end. Armstrong makes an occasional valiant effort to generate some frisson out of montages of friezes on a wall or grotesque artwork in the gallery but these fail to make the pulse move anywhat.

In many regards, The Haunted House of Horror is more of a routine murder mystery than it is a slasher or Old Dark House film, with a greater part of the show moving away from the title dwelling and taking place in various flats and police offices. Even there Michael Armstrong never tightens the plot. He has little interest in generating suspense from people being stalked around the mansion, not even in winding up suspicion and doubt as to who among the group might be the killer. The film picks up slightly with the revelation of the killer’s identity and the calm intensity of the performance of the individual in question throughout the scene. However, the rest of the film itself never rises above the routine.

Michael Armstrong went onto make Mark of the Devil (1970), a notorious film about the witchcraft persecutions of the Middle Ages, and the horror anthology Screamtime (1983). He did write a number of other films, including several 1970s British sex comedies, the most famous of these being The Ballad of Eskimo Nell (1975). He occasionally returned to write genre material, delivering the screenplays for Mark of the Devil Part II (1972), a further Old Dark House film House of the Long Shadows (1983) and the slasher film Psychosis (2010).