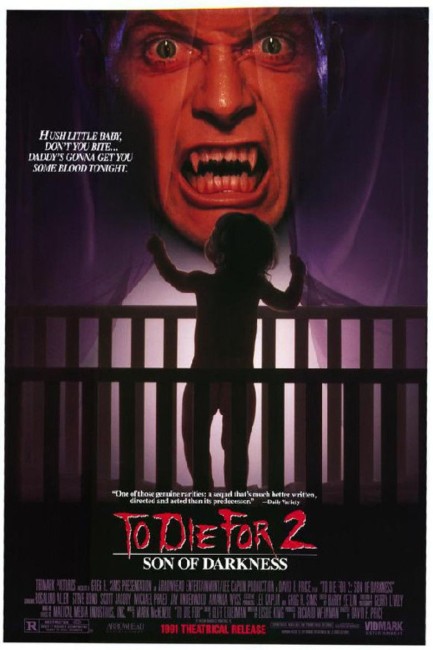 Vlad Tepes has been resurrected and now lives in the town of Lake Serenity where he maintains a new identity as Max Schreck, a doctor at the local hospital. Lurking nearby are his brother Tom and the vampirised Cellia. When Nina Black brings her infant son in to the hospital, Max tends him and then starts to romance Nina. However, Tom resents this and starts to drive a wedge between them, terrorising Nina. Meanwhile, Cellia sets her attentions on Nina’s brother Danny. At the same time, Martin Planting sees the news reports about the killings conducted by Tom and comes to Lake Serenity, trying to warn Nina about who Max really is.

To Die For (1989) was a vampire film that enjoyed moderate success when it came out. This is a sequel. It reunites several of the original cast – Steve Bond, Amanda Wyss, Scott Jacoby – although the central role of Vlad has been recast with British actor Michael Praed. The sequel comes from the same screenwriter Leslie King but director Deran Sarafian has been replaced by David F. Price.

To Die For was strictly average but Son of Darkness feels as though it takes everything that To Die For wanted to do – create a darkly romantic modern vampire film – and makes the same elements work in a much better package. One of the smartest choices is in the casting of the impossibly handsome Michael Praed who was considered a big heartthrob during the 1980s as tv’s Robin of Sherwood (1983-6) and as Prince Michael of Moldovia in Dynasty (1981-9) and here replaces the far more wimpy and anonymous Brendan Hughes who played the first film’s Vlad. David F. Price leaps right on board the romantic element having Praed inviting Rosalind Allen to dinner in a big old home with roaring fireplace, massive dining table and appearing down the stairs with gorgeously flowing long hair and ruffled shirt, as well as taking her for romantic horse rides in the snowy woods as an apres dinner flourish. Praed is perfectly cast and makes Vlad come to life as the character you felt like he should have been in the first film.

On the minus side, Son of Darkness never works quite as well with the horror elements. There are a variety of scenes with people attacking each other and a more sustained one where Steve Bond pursues Rosalind Allen through a boathouse. The climax however comes as far too convenient in its wrap-up of all the elements. The romantic focus of the film leaves you with the feeling the couple should have stayed together but in going with a traditional horror movie ending, it ends up contrarily being a tragic ending. Another minus is the return appearance of Steve Bond who gives a thuggish performance that leaves you with the impression that he works as a wise guy for the Mob on his days off.

Another rather silly effect – particularly one that seems far more evident watching the film two decades on when every reworking of a horror classic feels like it has to do the same – is namedropping classic horror references. Michael Praed’s vampire takes the pseudonym Max Schreck, which was of course the name of the actor who played Dracula/Orlock in the classic Nosferatu (1922). Elsewhere, David F. Price quotes from other horror films. He borrows Dracula’s trick of climbing down walls from Bram Stoker’s Dracula (1897) during the boatshed sequence. The climax also reworks the despatch of Dracula from Hammer’s Dracula/The Horror of Dracula (1958).

David F. Price made his directorial debut here and went to make only two other films as director with Children of the Corn II: The Deadly Sacrifice (1992), also starring Rosalind Allen, and the comedy Dr. Jekyll and Ms. Hyde (1995), while he also produced Leprechaun (1993).