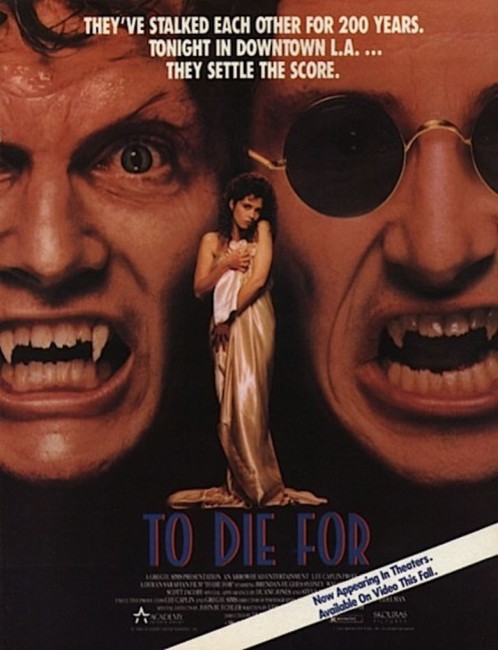 Realtor Kate Wooten is entranced by Vlad Tepish, a handsome stranger she meets at a party. He later turns up at her work and buys a local Gothic castle sight unseen. The two are romantically drawn to one another. At the same time, Kate is approached by Vlad’s old nemesis Tom who warns her that Vlad is a vampire. Tom shows her a portrait of a woman resembling Kate whom he loved and tells how Vlad ruthlessly killed her.

To Die For was one of the first of the modern breed of vampire films. In these modern vampire films, emphasis has been shifted from the battle between good and evil to immortal love stories, dark sexuality and the tortured soul of the vampire. This would later be elaborated by other films like Tale of a Vampire (1992) (which rehashes the plot of To Die For), Interview with the Vampire: The Vampire Chronicles (1994), Nadja (1994) and The Addiction (1995), before the massive success of Twilight (2008). Here Brendan Hughes’s Vlad is played sympathetically and the centre of the film is the romance between he and Sydney Walsh. On the minus side, there is nothing any more sophisticated to the plot here than that – it is Harlequin romance vampirism. The vampire romance was a relatively new concept at the time that the film was made but subsequent dark and sensual vampire films such as Bram Stoker’s Dracula (1992) or even more outrightly erotic ones such as Embrace the Darkness (1998) make To Die For look anaemic.

Furthermore, To Die For seems awkwardly caught between the classic and the modern developments of the vampire film. Where it tends to fall down is in not fully shucking its ties to the classic vampire film. The vampire here has to have a Gothic castle – improbably located in LA. The script uses the familiar connection between Vlad Tepes and Dracula as though it was the first story to ever think up the idea – and does not seem to realise how hackneyed a cliche it is. (One minor point the film does have over its predecessors is that Brendan Hughes actually looks like Vlad the Impaler of the surviving woodcuts. On the other hand, Hughes is too diminutive to make a terribly imposing vampire). Worse, the film does not even spell Tepes correctly. One also feels that the use of John Buechler makeups is inappropriate – in a romantic vampire film, the emphasis should not be on shock effect and disfigurement.

To Die For is not that badly made a film – it is occasionally effective. There is a nifty scene where Scott Jacoby and Micah Grant go to cut Amanda Wyss’s head off and she returns to life halfway through the operation. Sydney Walsh, an appealingly round-eyed actress, gives a perky and sexy performance.

The much better sequel was Son of Darkness: To Die For II (1991), which featured repeat performances from Amanda Wyss, Steve Bond and Scott Jacoby, as well as screenwriter Leslie King, but where the role of Vlad was recast with Michael Praed.

Deran Sarafian is better known as a director of action films such as Gunmen (1993) and Terminal Velocity (1994). He has made several other ventures into genre territory, including the cheap post-holocaust Interzone (1986), the cheap alien nasty film Alien Predator/The Falling/Mutant II (1987), the interesting semi-horror/action film Death Warrant (1990) and the backroads brutality film Roadflower/Road Killers (1993). In more recent years, Sarafian has moved into television where he has worked as a producer/director on various of the CSI incarnations and House M.D. (2004-12), among various other series.