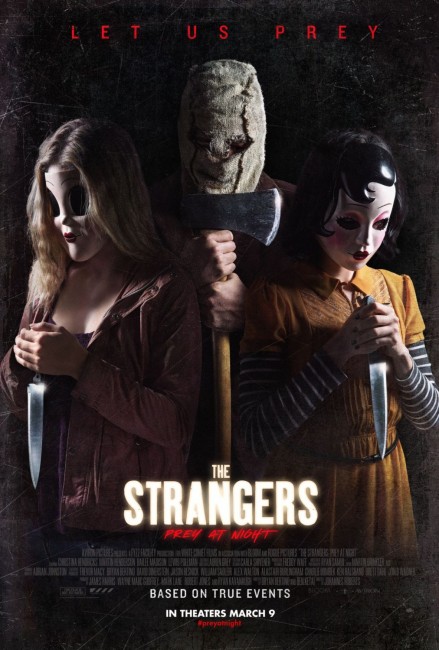 Husband and wife Mike and Cindy and their two teenage children Kinsey and Luke depart for a vacation at the Lake Gatlin camping ground owned by a relative. There are tensions within the family over the fact that Kinsey is about to be sent away to boarding school because of the trouble she has gotten into. They arrive to find the office deserted and keys left for them. Immediately after they settle into their cabin, they are attacked by a trio of masked figures.

The Strangers (2008) was a directorial debut from Bryan Bertino that quickly gained a word of mouth. I have seen it cited as one of the best horror films of the decade. After that film’s sleeper success, a sequel was immediately announced. Bryan Bertino was attached for a number of years but eventually parted ways and only attains a co-writer credit on the finished film. In the interim, the initial promise with which Bertino had been heralded as a director seemed to dissipate in the long wait for his follow-up with the unremarkable Found Footage film Mockingbird (2014) before a fine return to form with The Monster (2016).

It might be in the change of directors but The Strangers: Prey At Night lacks the same frisson that The Strangers did. The Strangers was filled with a series of eerie pop-up scares, whereas Johannes Roberts delivers Prey At Night down around the level of the average psycho/slasher film that this site watches by the bucketload. His scares are perfectly serviceable, nothing memorable. There are none of the eerie or jump out of your seat moments that the original had. Even the masked characters feel like they have had their effect rendered as something by-the-numbers by their copyings in the The Purge films and the likes of You’re Next (2011), Jackals (2017) and Ghostland/Incident in a Ghostland (2018).

Moreover, the plot set-up has become something more routine. The first film gave a us a domestic couple but made a point of telling us nothing about their background; by contrast, the sequel gives us a regular family and their bickerings. (Certainly, daughter Bailee Madison is about to be sent away to boarding school for some transgression we are never privy to). Even the adults – and two most known actors, Christina Hendricks and Martin Henderson – are bumped off first and the bulk of the film enacted by the two teenage characters. In other words, it is The Strangers dragged down to the level of the average slasher film.