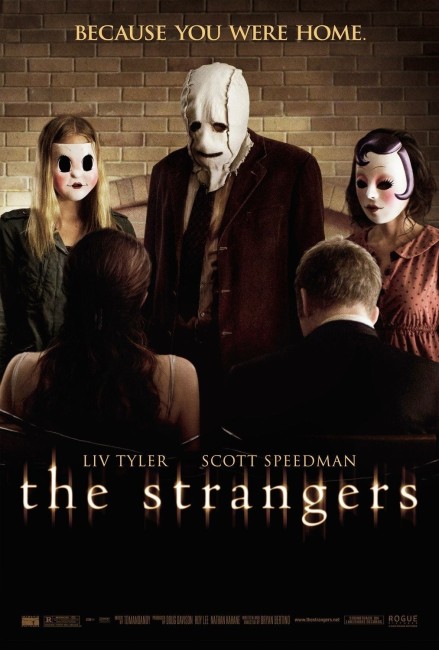 February 2005. James Hoyt and Kristen McKay return to his house in the country after an evening out. During the evening, James proposed to Kristen but things went wrong. As they relax, there is a knock at the door, which turns out to be a girl asking for somebody else. After James goes out to get a packet of cigarettes, Kristen is terrified by banging around outside the house and then a masked figure who enters. When James returns, he can see no evidence of anything. The strangers then come back, two women and a man wearing masks, and proceed to attack and terrify the two of them.

The Strangers is a modern brutality and assault thriller. It holds a clear lineage to a number of home siege films in the classic Backwoods Brutality cycle such as Straw Dogs (1971), Death Weekend/The House By the Lake (1976) and The Evictors (1979). Although, the film that The Strangers bears the closest resemblance to is the recent French Them (2006). Both Them and The Strangers claim to be based on a true story but in the way they transpire it becomes clear that this is a claim we must treat liberally. In both films, the identities and even faces of the attackers are kept shadowy and never seen, while The Strangers to a lesser extent co-opts the handheld camerawork that was a major feature of Them.

Newcomer Bryan Bertino is clearly a director worth watching in future. Bertino puts us through a particularly good workout of suspense and tension. It is not the extreme and sadistic assault of modern works like the Saw sequels and Hostel (2005), just plain effective suspense and jolt surprise. There is one particularly unnerving shot where Liv Tyler goes to the kitchen to get a glass of water and a masked figure appears (for the first time) unnoticed by her in the doorway opposite and is gone as she leaves again – it is a scene that makes the audience jump out of their seats in its eeriness.

The plot is fairly linear as the genre goes but Bryan Bertino works in some more than effective surprises. Superb use is made of the stereo soundtrack – see The Strangers in a theatrical setting if possible where the rattlings and bangings move all around with unnerving regard. About the only effect that does not work is the end shot where Liv Tyler suddenly returns to life, which seems too much of the type of last minute jump that has been to death in slasher films.

One of the more interesting things about the film is how Bryan Bertino leaves all explanations for what is happening unsaid. We never know why the masked people are attacking. At most, Liv Tyler asks “Why are you doing this to us?” only to be casually told “Because you were home.”

It is the same face of random terror bereft of any explanation that we get in The Birds (1963), Night of the Living Dead (1968), Duel (1971) and The Texas Chain Saw Massacre (1974). Bertino goes so far as to not even show us the faces of the attackers, always looking his camera away when they are unmasked. This even extends to Liv Tyler and Scott Speedman’s evening out where it becomes apparent that something went wrong that ruined his plans to propose to her – but, although we get flashbacks to earlier in the evening, what happened is deliberately left unsaid.

The film does come with the minus point of being lumbered with two perpetually non-acting leads – Liv Tyler and Scott Speedman. Although, once the action kicks in, this is something that absorbs us and neither are required to do too much more than react to things.

A sequel was announced almost immediately after the film came out but did not emerge until the unremarkable The Strangers: Prey at Night (2018). Bryan Bertino was originally announced to direct bu eventually stepped back to write and produce.