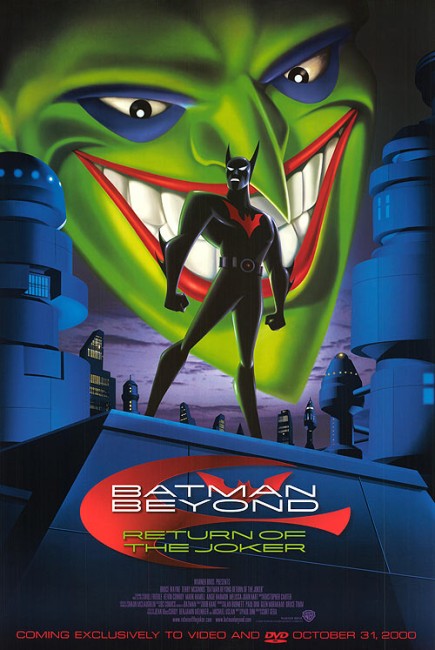 aka Batman of the Future: Return of the Joker

In the 21st Century, the aging Bruce Wayne has retired as Batman and the cape has been inherited by teenager Terry McGinnis in a redesigned hi-tech Batsuit. Suddenly, Batman’s old nemesis The Joker reappears and takes control of the Jokerz gang where he sets about conducting a series of technology crimes. Terry puzzles over how The Joker is still alive, which would mean that he would be in his eighties, but Bruce will not talk about how The Joker died. Terry eventually finds the story from Commissioner Barbara Gordon – how The Joker captured Robin, Tim Drake, and twisted his mind to turn him into Joker Junior. The Joker was killed in the ensuing battle. Terry puzzles over who the new Joker could be or if it is possible that the old Joker has survived. At the same time, The Joker unleashes a deadly satellite beam on New Gotham City.

After the considerable success of Tim Burton’s two dark and moody Batman movies Batman (1989) and Batman Returns (1992), a spinoff was created with the superb animated tv series Batman (1992-4), which employed the same dark moody look in a stylised art deco setting. The Batman series was then turned into a series of animated films, including the theatrically released Batman: Mask of the Phantasm (1993) and the video-released likes of Batman and Mr Freeze: SubZero (1998), The Batman Superman Movie: World’s Finest (1998), Batman: Mystery of the Batwoman (2003). The principal writing and producing talent behind Batman, Alan Burnett, Paul Dini and Bruce W. Timm, variously went on to adapt a number of other DC Comics superheroes to the small screen with Superman (1996-8), Justice League (2001-5), Teen Titans (2003-6), Krypto the Superdog (2005) and Green Lantern: The Animated Series (2011-3), as well as several animated films.

One of the team’s original creations was the tv series Batman Beyond (1999-2001), which was retitled Batman of the Future in international territories. This spun the basics of the Batman mythos out into the year 2039 where Bruce Wayne (still voiced by Kevin Conroy, Batman from the animated series) was now an aging man who had long ago hung up the cape until brash teenager Terry McGinnis discovered the Batcave. Terry persuaded him to revive Batman, taking over the role in a hi-tech Batsuit that can fly, turn invisible, has audio sensors in the glove tips and so on.

Batman Beyond proved a reasonable success, after which this movie was released to video. There was supposedly an earlier film The Batman Beyond Movie (1999), although this not a movie but a feature-length video compilation of six episodes from the tv series, including the two-part origin story. Intriguingly, the same creative team were commissioned circa 2004 to develop a live-action Batman Beyond film but this was abandoned after the decision was made to make Batman Begins (2005) instead. Batman Beyond also spawned a spinoff animated series with The Zeta Project (2001) about a self-aware covert agent android, while there were also crossovers of the characters into other animated series like Justice League and Static Shock (2000-4).

All the other Batman animated movies are above average but Batman Beyond: Return of the Joker disappoints somewhat. The animation, which was being produced on the cheap by South Korean studios by this point, is limited. Bruce Timm’s Batman and Superman animated series created a wonderfully stylised world for the DC universe to take place in but when it came to Justice League and some of the later films, this had been watered down. Batman Beyond took place in an interestingly stylised future setting that held some particularly striking colour contrasts, although ultimately it was only a vision of the present dressed up with a few Cyberpunk gadgets and genetic technologies. The same can be said for Return of the Joker.

Perhaps what is most disappointing is the fact that Batman Beyond: Return of the Joker resurrects the greatest villain from the Classic Batman mythos – The Joker – but fails to provide a big enough film to go along with such an event. Mark Hamill does the same entertainingly mad voicing he did throughout all the Joker’s appearances in the Bruce Timm animated series but the means of resurrecting The Joker strains plausibility – The Joker has managed to implant his DNA inside a computer chip and this goes from being a few cells to somehow resurrecting his entire personality and physical appearance and allowing it take over the mind of the person that the chip is implanted in. The story supporting this is routine.

The one great plus of all of Bruce Timm’s animated DC series and films is that they have excellent superheroic action sequences. There are some great sequences here like the opening with Batman fighting The Jokerz through the skies of Gotham on a giant clamp-like loading vehicle; the fight around the nightclub with a giant lava lamp spilling over; the fight between Batman, Batgirl, The Joker and Harley Quinn in the ruins of Arkham Asylum during the flashbacks; and particularly the sequences with the Batmobile on the freeway trying to avoid The Joker’s attempts to blast it with a satellite beam that chews up swathes of the city everywhere it turns.

The Batman animated films were able to push the envelope in terms of violence much more than the tv series were. Even so, Return of the Joker, which came out not longer after the Columbine High School shootings, ended up being cut by three minutes of violence under pressure from parental groups. A restored director’s cut was released in 2001.