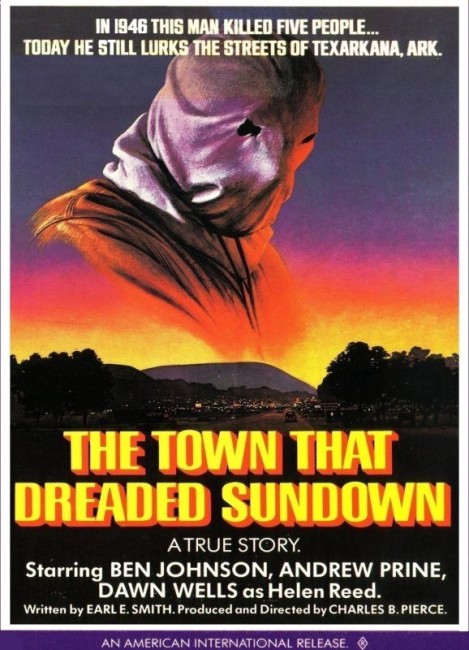 The town of Texarkana, which straddles the border of Texas and Arkansas, in 1946. The sheriff’s department is baffled following the attempted murder of a couple parked in a car at the local Lover’s Lane by a figure in a cloth mask. As other murders occur, all of couples in parked cars, the sheriff takes the step of bringing in Texas Ranger Captain J.D. Morales to head a task force to catch the Phantom Killer.

Charles B. Pierce was an Arkansas-based filmmaker who had a steady career making drive-in films throughout the 1970s. (Although not born there, Pierce had worked in Texarkana for many years). Pierce has great success with his first film The Legend of Boggy Creek (1972) based on a local Arkansas Bigfoot legend, which he approached with a documentary-like realism, promoting the film as being based on a true story. Pierce went onto other efforts such as the moonshiner comedy Bootleggers (1974), a number of Westerns, all with an Indian focus, including Winterhawk (1975), The Winds of Autumn (1976), Greyeagle (1977), Sacred Ground (1983) and Hawken’s Breed (1987), the legendarily bad Lee Majors Viking drama The Norseman (1980) and another horror film supposedly based on an unsolved true-life story with The Evictors (1979).

The so-called Phantom Killer was a serial killer responsible for the murder of five people in the town of Texarkana over ten weeks between February and May of 1946. The first attack on a couple in a parked car ended up with both victims surviving and identifying the killer as a man who had a cloth mask over his head with cut-out holes for the nose and eyes. Three weeks later, another couple were found, having been shot in a parked car, followed by another couple three weeks after that. This sparked a massive police manhunt, headed by Texas Ranger Captain M.T. ‘Lone Wolf’ Gonzaullus, which in turn brought the Phantom Killings to national press attention. With so much law enforcement attention focused on parked cars, the Phantom changed their m.o. for the final attack – the attempted shooting of a married couple in their home, of which the woman survived. A great many suspects were investigated by the police at the time and others have fallen under the microscope of amateur investigators since but nobody was ever arrested and the crime spree remains an unsolved to this day.

The Town That Dreaded Sundown does fairly well for what was expected of a True Crime film of the era. You have to remember this was a period where there was no internet meaning that there would not have been a host of amateur sleuth sites and podcasts pouring over every detail of the case and offering multiple interpretations, suspects and conspiracy theories. This means that all of the factual details of the case would have been culled either from books or looking through newspaper archives. The film never strays much from the basic facts of the case – apart from changing the names of the principals, the film’s most egregious addition to the incident is a semi-resolution to the murders with a climax where the police pursue The Phantom into the bayous (something that never happened in real life). Unlike many other True Crime films based on unsolved cases such as Zodiac (2007) and various films based on Jack the Ripper, there is no speculation offered as to the identity of The Phantom Killer – they keep their mask on throughout and never even get to speak.

The Town That Dreaded Sundown has developed a modest cult reputation, largely because of being out of circulation for many years – it was released to video in the early 1980s and did not appear on dvd until 2013. Charles B. Pierce does an okay job – nothing too remarkable but he has improved in style and directorial assurance since The Legend of Boggy Creek only four years earlier. Everything is filmed with a documentary-like realism and accompanied by a didactic 1950s-styled narrator. There is nothing too standout about the staging of the murders, apart from a bizarre one where the killer attacks a victim pinned to a tree using a weapon improvised from a trombone (something The Phantom never did in real-life). Perhaps Pierce’s biggest moment of directorial indulgence is the staging of a car chase probably for no other reason than that there was a fad for comical Southern moonshiner films during this period.

Pierce has a minor name cast, including Ben Johnson who has more than reasonable presence as the tough-as-nails Texas Ranger and Andrew Prine who was gaining a minor name in genre cinema of the period. Pierce himself plays the part of a bumbling comedy relief rookie cop.

Though billed as a remake, The Town That Dreaded Sundown (2014) was a sequel of sorts set in the present-day with a new Phantom Killer reappearing in Texarkana.