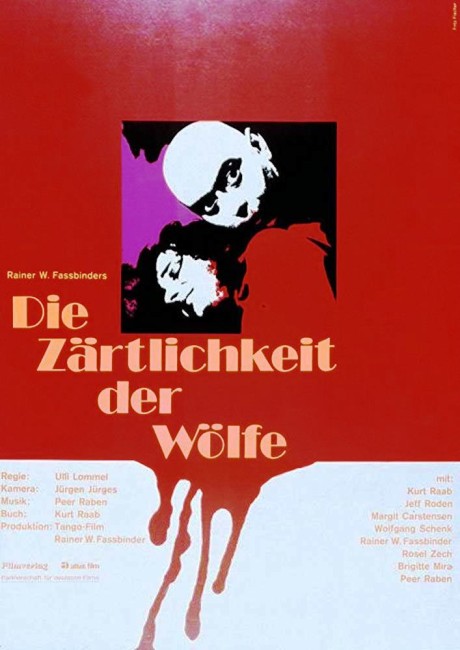 Fritz Haarmann is a petty criminal who has been recruited as an informant by the police. He makes a living from various blackmarket activities. Haarmann is also a homosexual. He picks up various young men and brings them back to his apartment where he likes to sink his teeth into their flesh and drink their blood, before disposing of their bodies.

The Tenderness of the Wolves was the third directorial outing for Ulli Lommel who has since went on to a career as a director that lasted five decades up until his death in 2017. At the time, Lommel was a young star on West German television where he then fell into the camp of the rising wunderkind Rainer Werner Fassbinder, director of highly acclaimed works of the era like The Marriage of Maria Braun (1978), Lili Marleen (1981) and Veronika Voss (1982), among others, including one science-fiction film World on a Wire (1973). Fassbinder lured Lommel to work for him as an actor with the promise of making his directorial debut, which duly came about here. (Fassbinder produces The Tenderness of the Wolves and also stars as the character of Wittowski – he can be spotted as the portly, mustachioed police associate dressed in a very sharp suit).

The Tenderness of the Wolves gained reasonable critical interest when it came out and brought Lommel to the attention of Andy Warhol who brought Lommel to the US to make Cocaine Cowboys (1979) under Warhol’s aegis. After that, Lommel went on to a career making low-budget horror films and put out a prolific number of these in the early 1980s, some of which – notably The Boogey Man (1980) – gained a reasonable profile. Since the 2000s, Lommel turned his attentions to mostly making a long string of extremely low-budget films based on true-life serial killers. (See below for a full list of Ulli Lommel’s other genre films).

The Tenderness of the Wolves is based on real-life German serial killer Fritz Haarmann (1879-1925). Haarmann was a petty thief living in Hanover who had received several jail terms for minor offences and operated on the blackmarket during the 1920s, a time when Germany was reeling from massive inflation caused by an attempt to deal with post-War reparations. Haarmann also acted as a police informer, which allowed him freedom to conduct his own activities. Between 1918 and his arrest in 1924, Haarmann killed at least 24 young men in their teens and early twenties, luring them back to his apartment either under false arrest or with the promise of work. He would then kill them, biting into their neck and drinking their blood, something that gained him the nickname The Vampire of Hanover. There are claims made that Haarmann would also sell the flesh of his victims as meat on the blackmarket. Haarmann was eventually arrested and executed by guillotine in 1925. His string of murders also served as inspiration for Fritz Lang with his classic crime thriller M (1931).

The script for the film comes from the lead actor Kurt Raab, another regular member of the Fassbinder entourage. I had first seen stills from The Tenderness of the Wolves in a book on vampire movies many years earlier, which led me to the thinking that it was a vampire film until I read up and found otherwise. Nevertheless, the effect is unmistakeable – the oft-repeated shots of the bald-headed Raab (this was well before the current era of fashionable shaven heads) with his bloody mouth at a victim’s neck (an image that has even been used to represent the film in some of its dvd covers) holds unmistakeable tones of the vampire film, even if the killer is a mundane figure.

Fassbinder was openly gay way back in the era before such was socially acceptable (as also was Kurt Raab). We get a frank portrait of this in the film where the scenes of Raab stripping one man naked and then getting on top of him to bite into his neck must have held quite an upfront shock value for the 1970s. The film also dallies with the suggestion, although never quite comes out and says it, that Haarmann is serving up the flesh of his victims as meat to his fellow tenants and selling it at the local delicatessen.

The minus side of the film is that not much happens. You might contrast it to a modern portrait of a serial killer film, which would delve into the killer’s mindset and schematically map out their crimes. By contrast, the focus of The Tenderness of the Wolves, while reasonably faithful to the Fritz Haarmann story, is typically that of a European film (or for that matter a Fassbinder film) of the era – much slower in pace and taking place in scenes of incidental detail – dinner parties with neighbours, Haarmann stealing and selling clothing, his picking up young men, dealings in local delicatessens and so on. However, there is rarely much in the film that can be put together in a way where we see the film dramatically progressing ie. most of it could be shuffled around in random order and make no difference to the plot. Though supposedly set in the same era that Haarmann operated (the 1920s), the film clearly takes place in the present with no effort made at period setting – the characters clearly use modern phones, for instance.