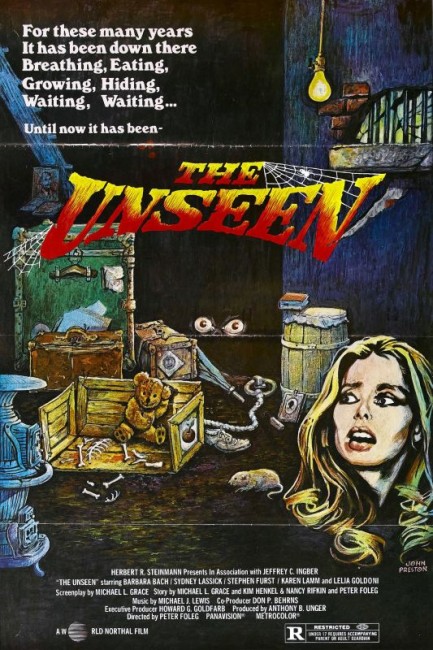 TV newswoman Jennifer Fast and her two camerawomen go to Solvang, a Danish historical community in Southern California, to cover the town’s anniversary celebrations. Once there they find there has been a mix-up with their hotel reservations. Middle-aged museum curator Ernest Keller invites them to stay with he and his extremely timid sister Virginia. However, once in the house, something that hides under the floorboards starts attacking the girls. Ernest locks Jennifer into the cellar. There she finds herself trapped with the misshapen and murderous idiot child that Virginia gave birth to out of an incestuous relationship with Ernest.

On the surface of it, The Unseen is a cliché-ridden film. It is a variant on a certain species of plot concerning mad relatives locked up in the cellar/attic. The earlier British-made The Beast in the Cellar (1970) is a perfect example of this.

As such, the film serves up an unoriginal soup of elements – family secrets in the cellar, the machinations of coincidence, the storm climax, the homicidal idiot child. The character of Junior seems to vary between a murderous monster and an innocent plaything depending on the dictates of the moment. Indeed, there are many similarities between The Unseen and Psycho (1960) – the girls happening upon an old, disused motel; being invited in by the twitchy, psychopathic manager who keeps a deadly secret locked away in the basement; the scenes voyeuristically peeping in on the girls while bathing. Co-writer Kim Henkel also co-wrote The Texas Chain Saw Massacre (1974), which also has many similarities in its themes about lurking in-bred horrors in an old dark house.

On the plus side, there is a slickness and an intensity to Peter Foleg’s direction that makes it all work rather well. Some of the editing – a cut from one character disappearing beneath the floorboards to a chicken’s head being chopped off – is crass, but the sharp photography and a superlative score from Michael J. Lewis that manages to be threatening and melodic at once gives the film a highly professional sheen. The climax does go on far too long and contains too many false deaths (although it is nice to see the sexist cliché of the boyfriend arriving as timely savior getting turned on its head). Mostly though, Peter Foleg keeps the film moving well.

There is some awful acting – most notably from Mrs. Ringo Starr, Barbara Bach, who simply doesn’t; Sydney Lassick who takes the giggly sadism completely over-the-top; and Leila Goldoni who goes to the other extreme with her hopeless, neurotic performance. On the other hand, there is Stephen Furst, behind a terrific makeup job, who approaches the role of the psycho-child as a mime performance and creates a character that is both sympathetic and terrifying in its incarnation.

Behind the pseudonym of Peter Foleg is Danny Steinmann, the director of the exploitation movie classic Savage Streets (1984) and Friday the 13th Part V: A New Beginning (1985). Because the finished version of The Unseen was substantially recut by producers behind his back, Steinmann took a pseudonym. (A detailed analysis of what happened can be found in an interview with Steinmann by Jeff Cramer at A Very Candid Conversation with Danny Steinmann). It is odd though when a director disowns the best film in his oeuvre.