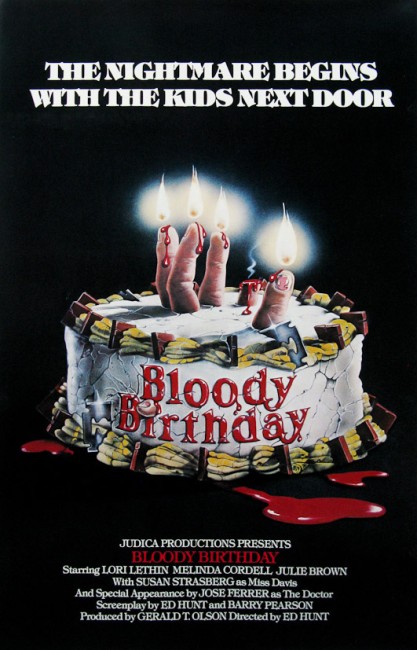 In Meadowvale, California, three children, Debbie, Curtis and Steven, were all born during an eclipse. According to their horoscopes, this has left them without emotions. They are now all ten year-olds and engage in a series of fiendish murders of other children and adults. Teenager Joyce Russel is looking after her young brother Timmy while their parents are away when they are targeted by the children. As Joyce tries to stand up against the children, her efforts to tell what is happening are disbelieved by the adults around her.

Bloody Birthday, which concerns a trio of evil children as opposed to usually just one that we have in most of these films, has a number of similarities to the earlier Devil Times Five (1974). Like Devil Times Five by its title and before that The Exorcist (1973) in far more direct ways, there is the suggestion that the children are under the influence of occult/diabolic forces. The three children here are given the explanation of having been born during an eclipse – although this proves of no further relevance beyond the prologue and a minor scene where Lori Lethin does their horoscopes to find that this means that they have no emotions.

Bloody Birthday is essentially a slasher film – but with evil children instead of hockey-masked killers. There are still the same teens undressed and in peril – one of whom is a young Julie Brown of Earth Girls Are Easy (1989) fame.

Much of the film is construed around a series of slasher set-pieces where the kids kill or try to kill people – a tense sequence in a junkyard with the wreck of a car being sent after Lori Lethin; another where the kids make Lori think they have put rat poison in the icing on a birthday cake; schoolteacher Susan Strasberg facing the kids who have replaced a toy gun with a real one; Julie Brown getting an arrow fired into her eye through the peephole in her closet door.

It all rises to a highly entertaining climax with Lori Lethin fighting off the kids as they try to strangle her and shoot her with guns and arrows. Of the three children, Elizabeth Hoy plays with a particularly icy cold and emotionless nastiness. All of which makes for a rather unassumingly entertaining film.

Canadian director Ed Hunt made a handful of genre films both in Canada and the US. His other films include the UFO invasion film Starship Invasions (1977), the plague outbreak thriller Plague/M3: The Gemini Strain (1978) and the cheesy The Brain (1988).