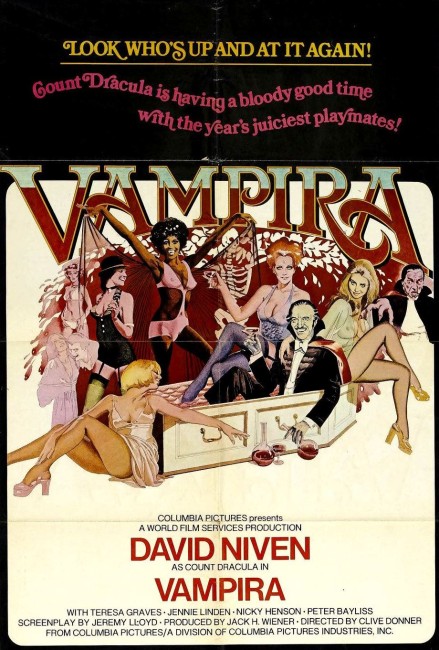 In Transylvania, Count Dracula has been reduced to opening his castle up to tourists. A group of Playboy Bunnies come to the castle to shoot a Most Biteable Playmate layout. When his manservant drains their blood, Dracula finds that it contains the rare Triple-O type. With the Triple-O, Dracula can revive his beloved wife Vampira who died after biting an anaemic peasant. However, the Playmates’ blood has been mixed together and the only choice is to give all of the samples to Vampira. These also include samples from a Black model and when Vampira returns to life, she emerges with her skin turned black. And so she and Dracula go to London to find which Playmate has the Triple-O in order to bleach Vampira white again.

All reviewers of the time dismissed it as a quick Young Frankenstein cash-in, although if anything Vampira/Old Dracula is more of a cash-in on Blacula (1972) and the brief fad for Blaxploitation horror films that it inspired. It also feels like a film that came along on the tail end of the Hammer Anglo-horror fad – and indeed employs several Hammer heroines including Veronica Carlson, Linda Hayden and Jennie Linden – that was trying feebly to find some relevancy by appealing to the Blaxploitation horror fad created by Blacula. A worthy Dracula spoof would have to wait a few years later until Love at First Bite (1979).

The film opens with fitful amusement – David Niven and manservant Peter Bayliss referring to blood as though it were a vintage wine and cracking puns about putting the blood bank in the red, or images of collapsible valise coffins. There is the occasional cheerfully absurd line – “I don’t like the idea of reviving my wife being compared to doing the washing.” – but this soon gives way to lumbering double-entendres: “I’ve got goosebumps,” “And what big ones too.”

Once the film gets to London, it degenerates into much frenetic comic running around with Nicky Henson trying to find the Playmates. David Niven gives the impression he did it for the paycheque and fails to get into the spirit of the farce that everybody around him does. The hamming of Teresa Graves as Vampira takes everything badly downhill.

The fitful vampire parody fails to disguise that the film’s prime purpose seems to have been that of softcore titillation. In the end, Vampira/Old Dracula has more in common with the Percy (1971) and sequel or the various Confessions films than Bram Stoker. The presentation of swinging London in the latter half is certainly livelier than the whole of the modernised Dracula we saw in Hammer’s Dracula A.D. 1972 (1972).