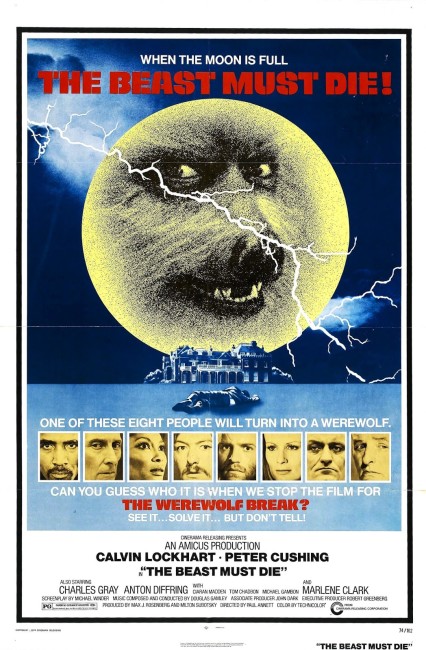 Tom Newcliffe gathers various people at his remote country mansion. He announces that he believes one amongst their number to be a werewolf. He has had the grounds wired up with hi-tech security and plans to hunt the werewolf down as the full moon rises. However, when the werewolf emerges, it proves more devious prey than Newcliffe had expected.

Amicus Films was the most successful of the companies that jumped on the English horror bandwagon in the 1960s in imitating the success that had been created by Hammer Films. Amicus’s staple was the horror anthology, beginning with Dr Terror’s House of Horrors (1965) and passing through the likes of The House That Dripped Blood (1970), Asylum (1972), Tales from the Crypt (1972) and The Vault of Horror (1973). They made various other films, including several psycho-thrillers, a series of lost world films beginning with The Land That Time Forgot (1974), a handful of science-fiction films, including two Doctor Who films, and even rock’n’roll movies.

The Beast Must Die was one of the oddities that Amicus made during this time. They were clearly engaged in some speculative genre crosshatching and came up with the novelty concept of conducting a werewolf whodunnit. It is possible that they drew inspiration from the huge box-office success that had been enjoyed that same year by the Agatha Christie adaptation Murder on the Orient Express (1974), which spun off a number of other period whodunnits. The Beast Must Die also gives the impression of trying to tap into the Blaxploitation/horror fad that began with the success of Blacula (1972) in casting a Black hero in Calvin Lockhart – there are unconfirmed rumours that the film was called Black Werewolf in some places.

Amicus also seem to have borrowed a few ideas from William Castle, director/producer of films like House on Haunted Hill (1959), The Tingler (1959) and 13 Ghosts (1960). Castle used to promote his films with sensationalistic gimmicks – winching skeletons across theatres, insuring audiences against dying of fright, wiring seats up to provide electric shocks and the like. Indeed, Castle had previously pioneered the use of a Fright Break as used here in Homicidal (1961). In The Beast Must Die, Amicus’s notion is the idea of a ‘Werewolf Break’ where, just before the revelation of the werewolf’s identity, a clock appears on screen to give audiences a 30 second countdown and time to guess who it might be.

Most genre reviewers are dismissive of The Beast Must Die, usually writing it off it as dull, talky and uneventful. Contrarily, I somewhat liked it. The set-up is interesting, even if the film fails in the eventual delivery. Most intriguing is the attempt to explain lycanthropy as a scientific phenomenon, with Peter Cushing having been written in for this express purpose. Despite what others may think, I did feel that director Paul Annett builds reasonable atmosphere, particularly during the hunting and the scene where the werewolf kills Anton Diffring.

On the other hand, The Beast Must Die is never as intriguing as it promises to be. It is particularly disappointing when it comes to the whodunnit angle. The film has a fine scene early on where Calvin Lockhart introduces the guests and hints at their veiled secrets, suggesting that one of them might be the werewolf. Subsequent to this scene however, these pasts prove to be of no further relevance to the film whatsoever. An Agatha Christie story by comparison would turn the backstory of each character into an improbably contorted chess game where each would be made to seem a suspect but also have an equally good alibi.

However, The Beast Must Die fails to do any of that. When the revelation comes, the guilty party could have been chosen by randomly drawing straws, so little is there any suspicion, doubt, red herrings or clues given as to their (or any other person’s) guilt. There is also little done to demonstrate why Calvin Lockhart is so certain that one of the people present has to be a werewolf – going by his recitation of evidence at the beginning, it is equally possible to argue that either none or possibly all of the characters could be werewolves, but there is nothing done to establish why he is so utterly certain that only one of them is.

Moreover, the film wastes a good cast. Peter Cushing, one of the mainstays of the British horror industry, gets second billing for a supporting performance that merely requires him to act sage and play through a silly accent. The other big name of the day Charles Gray gets probably the least screen time out of any of the suspects. Anton Diffring, a German actor of the era known for playing ice-cold Teutonic characters, is reasonably effective but is killed off early in the show. In the Before-They-Were-Famous category, one can also see a young Michael Gambon, one of the great actors of the English industry in the 1980s and beyond, playing one of the suspects.