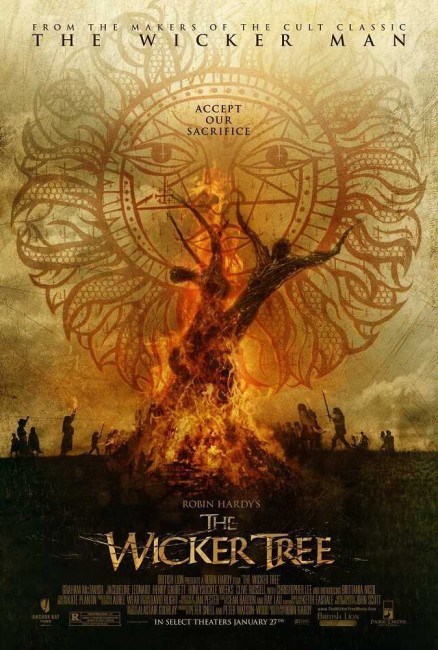 In Texas, Beth Boothby has enjoyed success as a Christian singer. She and her fiancee, the cowboy Steve, accept a two-year assignment from their church to go to Scotland to preach Christianity to the locals. Both of them wear chastity rings and have sworn to remain sexually pure until their wedding night. However, once in Edinburgh, they repeatedly have doors slammed in their face while trying to preach. Beth’s patron Sir Lachlan Morrison suggests that they might have better luck if they come to his hometown, the village of Tryssock. There they find their Christianity somewhat at odds with the locals who adhere to much older pagan ways. Steve is tempted from his vow of chastity in a tryst with the local girl Lolly. As May Day celebrations near, Beth agrees to accept the role of the May Queen and Steve the role of the Laddie. They are unaware that both of them are intended as human sacrifices to the pagan gods to lift the curse of a poisoned water table caused by Sir Roger’s nuclear reactor that has prevented the locals from being able to have children.

The Wicker Man (1973) is one of the genuine cult classics to emerge out of 1970s British cinema. It had an uneven distribution, including attempts to effectively get rid of it, but its presence has persisted and it is now recognised as a classic of the era. It offered up a startling polarity between Christendom and traditional pagan religions surviving into the modern world. This was badly remade as the Nicolas Cage starring The Wicker Man (2006), which seemed to miss by a wide margin everything that the original did so well.

The Wicker Man‘s director Robin Hardy had a very sporadic career subsequently, having directed only one other film with the psycho-thriller The Fantasist (1986), as well as having written the script for the quasi-pagan film The Bull Dance/Forbidden Sun (1989). He returns to the director’s chair here at age 82 after a twenty-five year absence from screens. He adapts The Wicker Tree from a novel he originally published as Cowboys for Christ (2006). Hardy died five years later and The Wicker Tree would be the last film he would ever make.

This is immediately apparent in the opening scenes where we see that Edward Woodward’s dour Episcopalian sergeant has been replaced by Brittania Nichol as a perky popular gospel singer from Texas who proudly sports her chastity ring. This ingeniously spins the essential religious conflict of The Wicker Man into one between paganism and modern evangelical Christianity, which was a far more muted issue at the time the original film came out. Here in five minutes, Robin Hardy manages to spearhead the essential conflicts that ran through the original with far more clarity than Neil La Bute managed to do in the entire running time of the 2006 remake.

The difference between the two is in that The Wicker Tree plays the paganism of the villagers in a way where it assumes that audiences have seen the original and know what is going on. Thus Honeysuckle Weeks’ flirtation with Henry Garrett is much more knowing, we are far more aware of what is happening when the locals innocently persuade Brittania Nichol to try on the May Queen dress, and when they persuade she and Henry Garrett to take part in the ceremonies, we know exactly the end that all of this is heading towards.

There is also much more of an emphasis on humour in this film than there was in The Wicker Man – notably the scenes with Clive Russell preparing Brittania Nichol’s body for sacrifice and getting stabbed in the testicles or Honeysuckle Weeks and her sexual tryst with policeman Alessandro Conetta – and there are times this element of humour becomes too broad and detracts from the sharpness of the story.

Robin Hardy also makes pointed satiric contrast between the pursuit of the Laddie across the countryside (a Celtic tradition he has invented for the film) and the English tradition of the foxhunt. Particularly notable are the folk songs that have been written for the soundtrack, which have come with a commendable bawdiness – including a striking piano number that manages to use fruit as a highly suggestive metaphor for sex.

In the end, The Wicker Tree is interesting, although it is not as incisive and sharp in what it does as The Wicker Man was. The division of Christianity and paganism starts well and is occasionally cleverly depicted. However, Robin Hardy portrays it more with amusement this time out and as a result dilutes the horrific effect that The Wicker Man built towards. Still there is an undeniable shock to the scene at the end where Henry Garrett is surrounded and devoured by the villagers in the castle, which is savagely contrasted with the use of a Christian hymn on the soundtrack about the blood of the lamb. There is also a somewhat different ending where Brittania Nichol refuses to go her fate as neatly as Edward Woodward did and stands up for herself.