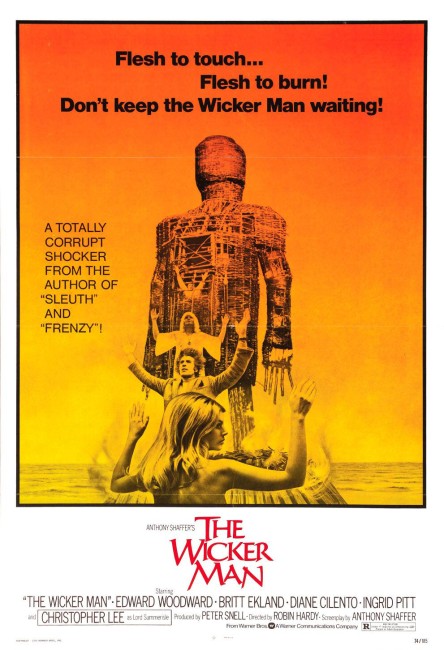 Police Sergeant Neil Howie flies out to the privately owned island of Summerisle off the coast of Scotland after receiving an anonymous letter concerning the disappearance of a local girl, Rowan Morrison. The islanders deny knowing Rowan but evidence keeps pointing to the contrary. As Howie becomes more deeply involved in the mystery, the islanders recreation of pagan rituals – fertility rites, magic remedies and the like – becomes more and more evident. To Howie’s Christian convictions, these things are abhorrent. He pieces together what appears to be the horrifying truth – that Rowan has been hidden with the intent of sacrificing her as a virgin at the May Day celebrations to appease the gods for the island’s crop failure.

The Wicker Man is a unique film that has built a considerable reputation over the years. It even gets a listing in Danny Peary’s book Cult Movies (1981). It is often seen as belonging to both the cycle of Anglo-horror films of the 1970s and the cycle of occult films that came out following Rosemary’s Baby (1968). Even though it falls thematically within the horror genre and casts Hammer horror staples Christopher Lee and Ingrid Pitt, The Wicker Man is clearly made outside of the horror genre and uniquely belongs in a category of its own.

Playwright Anthony Shaffer had just come from the hit success of the whodunnit parody play Sleuth (1970), which was then adapted into an equally successful film Sleuth (1972) with Laurence Olivier and Michael Caine. Shaffer makes a concerted effort to avoid the clichés of witchcraft films – the then recent Blood on Satan’s Claw (1971) would make a good comparison point. Instead, he offers a unique contrast of traditional Celtic beliefs up against Christian ones.

The script remains carefully equivocal about the actuality of either – there is nothing in the film, for instance, that indicates that either belief has any supernatural basis outside of its followers. Instead, Shaffer spends his time fascinatingly detailing an alternate culture that might exist if pagan beliefs had flourished into the modern day – ribald sexuality, rituals with naked girls dancing through flames to enhance fertility, a mother putting a toad in her child’s mouth to heal her cough. The structuring of the plot into a final Machiavellian trap is a move that comes with genuinely horrifying impact and the ending the film goes out is unforgettable.

The Wicker Man is a seductively colourful film. Robin Hardy directs with enormous style. The film is shot with bright colour and clothing contrasted against the bleak Scottish landscape – sometimes with teasing effect upon Hardy’s part, notably during the chase of the carnival dragon through the empty streets. The most mesmerising scene is Britt Ekland’s attempted seduction of Edward Woodward, a hypnotically lyrical half-lit scene with her singing naked in her room, thumping on the wall, rising to a fevered dance as Woodward cowers in the darkness on the other side trying to resist temptation.

Christopher Lee called the work he does here his best performance and he could well be right – it is an unnerving one he gives, halfway between friendliness and mad intensity. Some of the other casting raises eyebrows – émigré Pole Ingrid Pitt and the Swedish Britt Ekland are both cast as Scots, for instance – but in this fine film they are only laudable parts of the spellbinding tapestry. There is also a beautifully lyrical Gaelic folk score.

What is perhaps saddest about such a fine film is the appalling treatment it was given by its distributors. British Lion underwent a change of management at the time the film was completed and the new administration found the theme of paganism distasteful. The film was severely cut and released in England in an 84 minute version and then only on a double-bill with Don’t Look Now (1973). (It certainly would have been one of the most unique genre double-bills of 1973 for unsuspecting patrons). Americans did not get to see the film until 1978, although they were at least able to see a longer 102-minute version. This contains scenes before the arrival on the island with Edward Woodward preaching in church and receiving the photo and some later scenes of Christopher Lee reciting a poem. In the video and DVD era, various releases have claimed to offer complete versions of the film, although none have managed to restore the full original version, which is purported to exist at around 120 minutes. Stories persist that this was alternately dumped down a mineshaft in Wales or buried under a motorway landfill.

Robin Hardy almost entirely vanished from screens following The Wicker Man. He did write the script for The Bulldance (1989), which concerns paganism and goings-on at a girls school in Greece, although this is not horror or a genre film. Hardy did however return to the genre to direct the interestingly eccentric Irish psycho-thriller The Fantasist (1986).

In the seriously bad mistakes department, Neil LaBute conducted a remake The Wicker Man (2006), with the setting now transferred to America, the pagan-Christian dialectic excised and with Nicolas Cage in the Edward Woodward role. Robin Hardy did eventually return to make the quasi-sequel The Wicker Tree (2011), which is lesser but not entirely uninteresting.