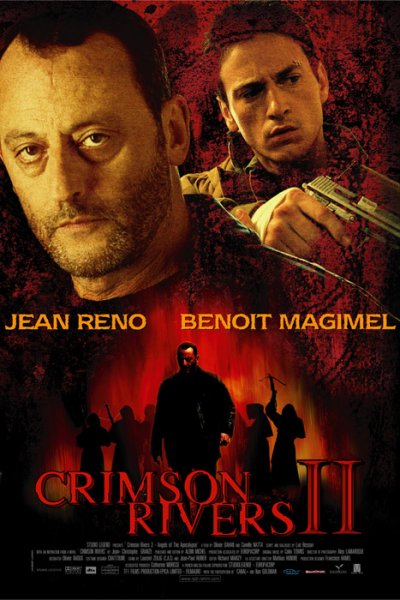 Police inspector Pierre Niemans is called to Lorraine to investigate a murder at Laubadieu Abbey, a monastery of the obscure Montanist order, after a novice nails a crucifix into the wall and discovers a body buried inside. At the same time, Detective Reda is driving back from a stakeout when he hits a man dressed as Jesus Christ who is running across the street wounded after having been shot. Reda and Niemans’ investigations coincide as hooded monks with seemingly superhuman strength attempt to kill Jesus in the hospital and are found to be responsible for a number of other murders. It is discovered that the murdered victims all have the same first names and professions as Christ’s disciples. The trail of bodies leads to a cabal of people who are trying to uncover a lost document that heralds the Biblical end of the world.

In Kassovitz’s place is Olivier Dahan, best known as a music video director. Olivier Dahan had previously made several other films including Already Dead (1998) about out of control youths; a deconstructed Tom Thumb (2001); Ghost River (2002), which is not a genre film despite the title but about the life of a middle-aging hooker; and subsequently went onto the international arthouse hit of the Edith Piaf biopic La Vie en Rose (2007), followed by Grace of Monaco (2014).

One fascinating newcomer to the franchise is Luc Besson who writes the script. Luc Besson is of course the high-profile French director of action films like Nikita/La Femme Nikita (1990), The Professional/Leon (1994) and The Fifth Element (1997). Besson claims to be inspired by the original 1999 novel by Jean-Christophe Grange but Angels of the Apocalypse is more a case of him rearranging the basics – two detectives on separate investigations, a series of mysterious murders in a closed and secretive order – to make an entirely new film. The sequel has also managed to bring on board the 81-year-old Christopher Lee who delivers his part in flawless French.

I have not seen any of Olivier Dahan’s others films but on the basis of Crimson Rivers II: Angels of the Apocalypse he seems a director full of empty-headed style and little sense of story. Crimson Rivers II: Angels of the Apocalypse is only driven along by a series of bizarre images being tossed up every few minutes – the entertainingly schlocky moment right at the start where a crucifix is nailed into a wall and the figure of Christ seemingly starts to bleed; a jolting scene where a customs officer is crucified to a wall with a nailgun as the picture of a fighter plane sits starkly on the wall above him like a cross; a bunch of human heads found inside a fisherman’s net; the scene where one of the Maginot Line turrets turns on Jean Reno’s car and sprays it with heavy-duty machine-fun fire; and all manner of random gore and splatter.

Olivier Dahan also throws in several random action scenes – a fight in a warehouse apartment that goes on far too long and an even longer chase through several front yards, a railway line and into a factory, as well as a chase through a supermarket – that seem there for no other purpose than spicing up the plot whenever it is in danger of slowing down. There is no sense to any of this – just a film being propelled by Olivier Dahan’s propensity for bizarre imagery.

Luc Besson’s screenplay is also disappointingly poor. Crimson Rivers II: Angels of the Apocalypse does have an intriguing central idea, which offers a mix of the serial killer thriller a la The Silence of the Lambs (1991) and Se7en (1995) and the End Times Prophecy film a la The Omen (1976) and End of Days (1999). The set-up is somewhat reminiscent of another serial killer thriller, Russell Mulcahy’s Resurrection (1999). Contrary to The Omen et al, Luc Besson suggests that the cultists heralding the Biblical End of the World are merely crazy conspirators and that there are no supernatural elements.

There are also a number of holes and unexplained sections to the film. It is not at all clear why people with the names of the twelve Disciples are being eliminated. It is said that they are witnesses but it is not explained why these witnesses by an extremely wild coincidence also happen to have not only the names of the Disciples but also the same professions. It is not clear why an important historical book is buried somewhere down the Maginot Line. And what does someone dressed as Jesus Christ have to do with all of this? Nor does Luc Besson particularly explain if there are no supernatural elements to the film, how a prophecy more than a thousand years old manages to herald things happening to the very next day. The two detectives played by Jean Reno and Benoit Magimel rarely ever come to the fore as characters.

The films later underwent a reworking as the tv series The Crimson Rivers (2018- ) starring Olivier Marchal as Niemans.