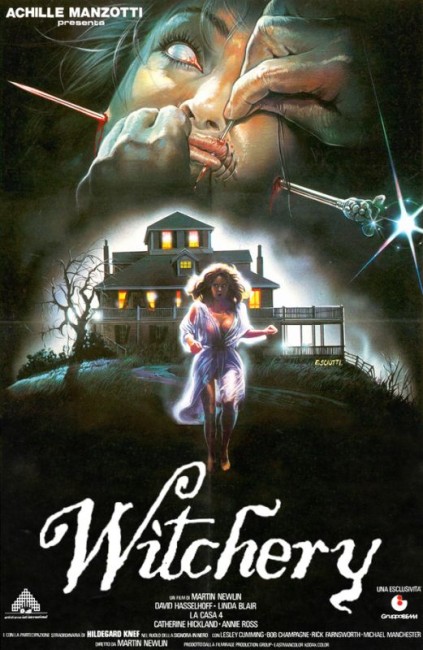 Leslie and her boyfriend Gary travel out to an island in search of the witch lights that are reputed to be there as part of her research for a book on witchcraft. At the same time, Freddie Brooks and his family travel out to the island along with a realtor to examine the abandoned hotel and consider the possibility of buying it. They all become stranded there. The house’s previous owner, a has-been movie actress, then comes back from the dead in order to drag the visitors down to Hell as sacrifices.

Witchery or Witchcraft – which should not be confused with the B-budget American Witchcraft (1988) that came out the same year and spawned an amazing eleven sequels – is a B-budget Italian horror film. In Italy, it posed as an unconnected sequel to Umberto Lenzi’s haunted house film Ghosthouse/La Casa 3 (1988) but Ghosthouse was not widely released in English-speaking countries and so the film was retitled (indeed retitled several different times). La Casa‘s 1 and 2 were respectively the Italian titles for The Evil Dead (1981) and The Evil Dead II (1987). There was a subsequent La Case 5 (1990), which was released in the US under the title Beyond Darkness.

There is some confusion over who the director of the film is. Italian films frequently list Anglicised names to gain appeal across the Atlantic and this version lists the director as Martin Newland. The Internet Movie Database lists the director as Fabrizio Laurenti, a minor Italian director who has made nothing else of any distinction excepting Troll 3 (1990). On the other hand, a number of other sources list the prolific Joe D’Amato, also known under a dozen other pseudonyms, and director of nearly 180 films, including a host of Emmanuelle sequels and numerous other porn films and the atrocious Ator sword and sorcery series. D’Amato had the distinction of being a churner of the bottom of the barrel amidst Italy’s proclivity for hardcore zombie/cannibal movies, having made efforts like the Anthropophagous/Grim Reaper films and the infamous Blue Holocaust (1979).

Witchery has a fairly bad reputation. There is not much to it. On the other hand, once one gets past the vague muddle of possession, supernatural justice and haunting clichés that serves as a plot, there is a certain gruesome stylism to the film. I particularly liked the image of Annie Ross hung upside in a fireplace with her lips sewn shut, unable to cry out as the people below unheedingly light a fire. There is also a startling dream sequence where Leslie Cummings is raped by a man with his lips sewn shut. On the other hand, the scene where Bob Champagne is killed by a voodoo doll is merely silly, largely due to poor opticals.

The customary shoddy logic and acting of low-budget territory prevails, although the film has a slickness of photography and editing that is rare to low-budget. Several American actors have been imported for the occasion, including David Hasselhoff, Linda Blair in a rare return to Exorcist (1973) territory and Annie Ross, as well as German actress Hildegard Knef.