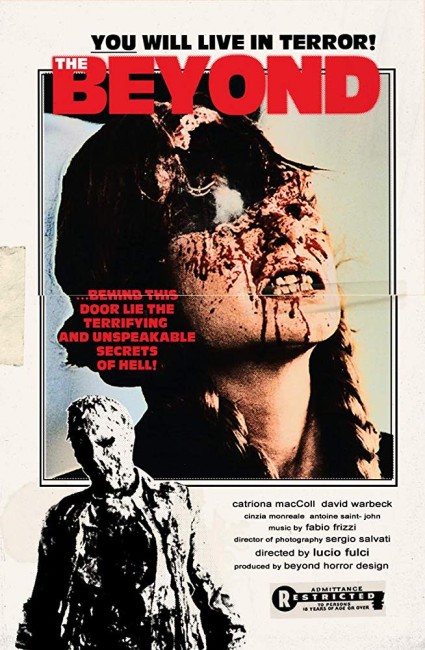 aka The Seven Doors of Death

In 1927, Louisiana townspeople kill the warlock Schweik for his blasphemous practices, leaving his body bricked up at the Seven Gates Hotel. In the present day, Liza Merrill inherits the hotel and sets about renovating it. The construction work uncovers Schweik’s entombed body and soon bizarre deaths are occurring everywhere. Liza comes to realise that the hotel contains one of the seven gateways to Hell and that once the gateway is opened the dead will emerge to walk the Earth.

Director Lucio Fulci emerged as a surprise cult figure during the Italian horror cycle of the late 1970s and early 1980s. This period was a boom time for Italian horror that is generally recognised as producing some of the most extreme horror films ever made. There were a great many giallo psycho-thrillers made during this era, while the period also produced the notorious Italian cannibal film, as well as numerous cheap but extremeeeeeeemely gory zombie films that borrowed from Dawn of the Dead (1978), which had been a huge success in Italy.

Amid the numerous cannibal/zombie movies made during this period, Lucio Fulci became the nearest there was to a poet of the genre. Fulci attained his greatest following in the period between 1979 and 1981 where he produced the likes of Zombie – Flesh Eaters (1979), City of the Living Dead/The Gates of Hell (1980), The Beyond/The Seven Doors of Death and The House By the Cemetery (1981), which are recognised as being his most imaginative films in terms of gore and directorial effect. After this period, Fulci’s films, although he was no less prolific in his output, seem to lose their vitality and are routinely and indifferently made. (A full list of Lucio Fulci’s genre films is at the bottom of the page).

The Beyond is regarded as one of Lucio Fulci’s best films. There is gore aplently. There is a very nasty opening scene where the warlock is whipped with chains, his cheek is gouged open, spikes are nailed through his wrist to pin him to the wall and then boiling oil is thrown over his body, melting him to the skeleton. In other scenes, acid is poured on a face, causing it to melt. There is a strong scene where spiders crawl all over a victim’s face and then start burrowing into and devouring the nose, eyes and tongue (which is undone somewhat by the obviousness of the fake head). Maid Veronica Lazar is attacked by a zombie that gets up out of a bath and grabs her head, impaling it on a nail protruding from the wall, causing her eyeball to pop out on the end of the nail. In a scene reminiscent of Suspiria (1977), a blind girl is attacked by her seeing-eye dog, which rips out her throat in a gush of blood and tears her ear off. There is a rather fake scene where Giovanni De Nava’s face is grabbed by a claw that causes her eyeball to pop out.

The film mounts to a George Romero-styled apocalyptic siege with the nominal heroes fighting off and blowing away the zombies, although this is somewhat undone by the fact that Fulci is shooting on a much more impoverished budget than Romero and the climax fails to attain any epic scale as a result.

I must admit that I find Lucio Fulci one of the most overrated directors in the horror genre. If one was to cut out all the gore scenes and present his films in terms of what remained, what would be left would be a series of cheaply made, incoherent films that display little more than the most rudimentary in the way of directorial skill.

The Beyond is incredibly frustrating in terms of plot. Things seem to happen entirely randomly, people of absolutely no connection to the hotel are killed for unclear reasons. The film is little more than a parade of novelty gory deaths. Fulci’s attempts to create atmosphere seem to exist only of slow motion mists and crude shock jumps. Certainly, the film arrives at an interestingly surreal ending where the hero and heroine disappear into a vision of Hell that is the same as a painting in the hotel.

One supposes that you have to credit Lucio Fulci for doing something that is a little more than churning out the standard Dawn of the Dead copy. Indeed, The Beyond could easily be a Romero zombie film crosshatched with the occult-unleashed sadism of Dario Argento films like Suspiria and Inferno (1980). That and with Fulci having borrowed the gateway to hell premise from The Sentinel (1977). Certainly, there are many similarities between Dario Argento and Lucio Fulci. Both make films with the same almost complete indifference to narrative and where the only dramatic pay-off is a series of sadistically gory despatches. Argento at least mounts his with a sense of style; Lucio Fulci on the other hand does not.