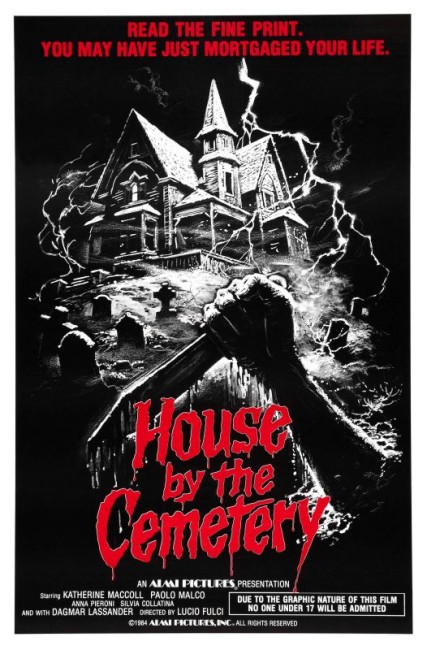 aka The House Outside the Cemetery

Historian Norman Boyle, his wife Lucy and young son Bob leave New York City and move into an old house outside of Boston. The house belonged to a colleague of Norman’s who died under mysterious circumstances. Bob believes that a girl at the window in a photo of the house on the wall is warning them not to move in. Once in the house, they experience mysterious things. Something that lurks in the locked cellar emerges and brutally kills people. Norman digs into the house’s past and becomes intrigued about the story of its previous owner Dr Jacob Freudstein who was engaged in unorthodox experiments.

Italian director Lucio Fulci (1927-95) attained a brief cult following during the 1980s. During the period 1979-81, Fulci made a series of films, usually featuring zombies in some form, that include Zombie – Flesh Eaters (1979), City of the Living Dead/The Gates of Hell (1980), The Beyond/The Seven Doors of Death (1981), The House By the Cemetery and The New York Ripper (1981). These were premised principally around the provision of gory and way-out murders, various surreal happenings and not much else, least of all any plot holding them together. Fulci’s subsequent films up until his death in 1996, are much less interesting, largely because the outrë gore was watered down. (See bottom of page for a full listing of Lucio Fulci’s horror films).

Lucio Fulci always seemed like a hack version of Dario Argento – at least Argento around the period of his occult films like Suspiria (1977) and Inferno (1980), which were likewise based around wildly artistic novelty deaths with little plot to connect them together. (Fulci never seemed interested in the nominal psycho-thriller rationales that served in Argento’s giallo films). You could say that The House By the Cemetery feels like a Dario Argento version of The Amityville Horror (1979).

A perfect example of the randomness of the film is how Fulci shoots meaning-laden closeups of people’s eyes. We get closeups of babysitter Ania Pieroni as she gives seductive looks at husband Paolo Malco, giving the strong impression that she is flirting with or tempting him, but then she is killed off and all the meaning-laden looks prove of zero relevance. It is never made clear what Dr Freudstein is up to in the cellar, other than collecting bodies to extend his life – he just seems a zombie/mad scientist thrown into the mix without much explanation.

Nor does the zombie/mad scientist easily gel with the ghosts that appear in the house elsewhere, not to mention the peculiar ending, not unlike The Shining (1980), where the ghost mother and daughter welcome young Bob (Giovanni Frezza) to join them. The main problem with the film is that in between the gore set-pieces, there is almost nothing holding The House By the Cemetery together. The film has a very slow pace and little happens beyond an extremely gory despatch every ten minutes or so.

Of course, there are all of Fulci’s random gore effects – in the opening scene, a teenage girl is stabbed in the back of the head and a knife comes out through her mouth; realtor Dagmer Lassender is repeatedly stabbed with a poker and then her throat slit; there is an extremely gory scene where the camera pans around the cellar showing all the hacked-off body parts littered there; babysitter Ania Pieroni’s throat is very gorily slit and then in a prize schlock moment her head rolls down the stairs as the kid comes searching for her.

In a scene completely unrelated to anything, a mother and child are window-shopping outside a store and a mannequin’s head falls off and appears to be bloodily decapitated. There is also a scene that goes on for several minutes where Paolo Malco bloodily fights with and kills a bat that is unrelated to anything else.

Fulci generates suspense in one scene in the cellar where the zombie scientist’s hand pushes young Giovanni Frezza’s face up against the door, while on the other side the father tries to bash the door down with an axe and the blade comes through only inches away from the kid. It is undeniably effective, although is a scene that has clearly been modelled on the similar one in City of the Living Dead where Christopher George uses  a pickaxe to smash into the coffin where Catriona MacColl is buried.