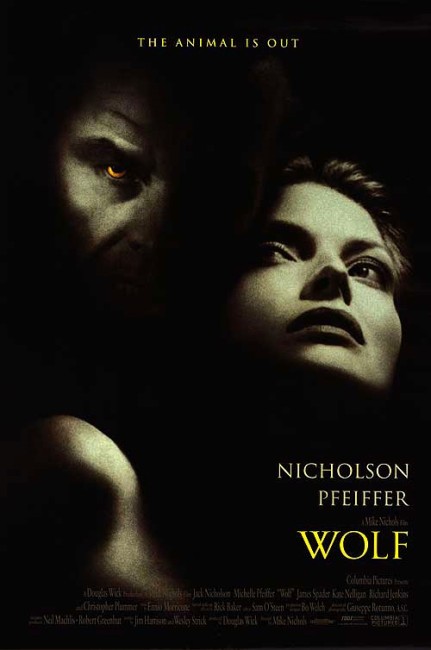 New York book editor Will Randall is driving back from Vermont one evening when he hits a wolf on the road. When he goes to look at the body, the wolf bites him. Back in New York, Randall learns that publisher Raymond Alden has demoted him to the position of foreign editor and his ambitious protégé Stewart Swinton has been offered his job. He also finds that he has a newfound hunger and aggressiveness, as well as hyper-alert senses, and uses these to assert himself in the boardroom and get his old job back. As he becomes involved with Alden’s wayward daughter Laura, Randall fears that he is becoming a wolf and being driven to kill under the light of the full moon.

Wolf was carefully built up with one of the most arresting promotional campaigns in recent memory. There was a trailer that consisted of a shot of a moon slowly dissolving into a closeup of an eye and the urgently voiced phrase “Inside every man there are two people – one good, one beast,” ending on a roar. The only shot we saw from the film itself was Jack Nicholson looming over a sleeping negligee-clad Michelle Pfeiffer – and then the trailer faded out on the four-letter title in white appearing from behind inky clouds. It was a campaign that succeeded in making Wolf into one of the year’s hits. It set up the expectation of two things – a werewolf story that dug back into primal animal natures and secondly the suggestion of an erotic werewolf film.

Unfortunately, many people ended up being disappointed with the actual film, which held nothing of the expectations that the promotional campaign had built up. The erotic promise was merely a tease that amounted to nothing more than what was shown in the trailer; the bit about animal natures, which the film at least does not opt out on, was to the average filmgoer just intellectual nonsense; and the film was neither the stylish big-budget werewolf affair that Bram Stoker’s Dracula (1992) had been for vampire films, nor even a rehashed B-movie pumped up with a big effects budget as Fright Night (1985) had been. The biggest disappointment seems to have been the film’s lack of flashy effects, with the film receiving a host of “Maybe all the money got spent on Jack Nicholson’s salary”-type reviews.

Nevertheless, Wolf is still an impressive film in different ways to any of the above. It is an earnest attempt to take werewolf mythology back to its psychological origins as a metaphor for humanity’s choice between socialisation and animal instinct. Most of all, it tells the transformation of a man into a wolf in psychological terms – this is not a film that needs big-budget transformation effects. The film’s most invigorating scenes are not when Jack Nicholson is out hunting but rather the scenes where he takes charge in the boardroom. Indeed, the film could easily have come subtitled Lycanthropy and the Art of Self-Assertion.

There is some irony when it comes to the film’s transformation effects. Wolf brings on board two separate makeup teams, including Rick Baker, the top name in the field, as well as Industrial Light and Magic on effects, but for the contrary purpose of creating ultra low-key transformations – no more than a set of grizzled sideburns and glowing eyes – in fact, disguising the effects and making them seem as unobtrusive as possible. The great irony is that the most expensive effects people in Hollywood have been brought on board to produce effects that most low-budget films comparably achieve for all of about $1.50.

In the end, perhaps Wolf is too quietly mannered and lacks enough of what the audience came for – the scene where Jack Nicholson pursues a deer raises the atmosphere slightly, but there is little else that generates suspense. Nicholson manages to tone his usual theatrics down but he is still too outgoing (and at the age of 57 too weather-beaten – in fact, you could say that Nicholson does not need makeup to play a wolf) to convincingly play a milquetoast New York book editor. With an extrovert actor like Jack Nicholson, the character’s mousiness has no conviction and thus the film is mostly a waiting for the inevitable point when Nicholson gets to open up and play to form. It needs a quieter, more unobtrusive actor – someone like Dustin Hoffman – to play the part. Nevertheless, Nicholson does have some convincingly quiet moments – it is possibly the most toned down performance he has ever given – particularly some of the scenes in the hotel room where he agonises over being able to be good.

As usual, Michelle Pfeiffer seems airily distant. She has several good moments playing the indifferent-seeming wayward heiress but once she gets to shuck the character’s psychological barriers she seems as removed as usual. (She also suffers from a fuzzily defined character – her waywardness starts out well, but she too easily turns around to become the good heroine). James Spader does the ultimate variation on yet another of his slick, lying, twitchily apologetic yuppie executives.