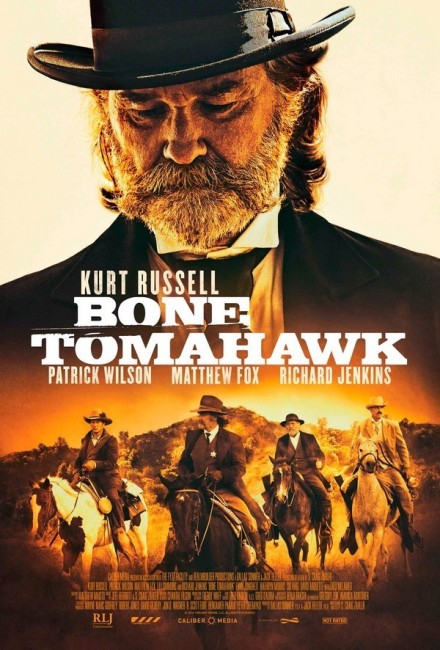 In the tiny Western town of Bright Hope, Sheriff Franklin Hunt questions a stranger to town who was seen burying a body. When the stranger tries to flee, Hunt shoots him in the leg. The town doctor Samantha O’Dwyer is brought to the jail overnight to tend the man’s wound. When Hunt arrives in the morning, he finds the jail empty with the stranger, Samantha and his deputy all missing. A local Indian identifies an arrow left behind as belonging to a tribe of Indians he calls Troglodytes but warns they are no longer human and that anyone who ventures into their territory is killed. Hunt sets up a posse to go and rescue them where he is joined by his aging backup deputy Chicory, Samantha’s husband Arthur who insists on coming despite the fact he has a broken leg and the former soldier John Brooder who claims to have killed more Indians than any of them. The quest is beset by Arthur’s worsening and possibly gangrenous leg and marauders who steal their horses, forcing them to continue on foot. However, this has not prepared them for what awaits at the other end.

Bone Tomahawk is a directorial debut for S. Craig Zahler. Zahler is a multi-disciplinary talent. He has written four novels, one of which, the Western A Congregation of Jackals (2010), was nominated for awards. Under the name Czar, he is a drummer, lyricist and songwriter with the heavy metal bands Realmbuilder and Charnel Valley. Zahler has also worked as cinematographer on a handful of minor indie films, as well as written the screenplay for the brutal horror film The Incident/Asylum Blackout (2011) about the staff trapped in an asylum for the criminally insane when the power goes off.

The Western used to be one of the most popular form of cinema entertainment from the 1930s through the 1950s but went into a steady decline from the 1960s. This is also around the time where genre material started to conduct some bizarrely entertaining conceptual mash-ups with the Western. The first of these was the vampire Western Curse of the Undead (1959) and was followed by the B-movie duo of Billy the Kid Versus Dracula (1966) and its companion piece Jesse James Meets Frankenstein’s Daughter (1966). Elsewhere we have seen vampire Westerns such as Sundown: The Vampire in Retreat (1990); avenging ghost/revenant Westerns like High Plains Drifter (1973), Shadow of Chikara (1977), Ghostriders (1987), Ghost Town (1988) and Jonah Hex (2010); two zombie Westerns with The Quick and the Undead (2006) and The Dead and the Damned (2010); and two entire horror Western anthologies with Grim Prairie Tales (1990) and Into the Badlands (1991).

Bone Tomahawk received much review in genre press. It has a number of similarities in plot to the B-budgeted The Burrowers (2008) but sitting down to watch it, it feels very different in tone from most of the abovementioned genre hybrids. For one, it takes well over an hour (the film has a two-hour plus running time) to arrive at the horror element – something almost unheard of in a genre film. This is spent drawing us into the exactingly detailed world of the era and the long and arduous quest. The latter is a Western standard – the determined posse heading into Indian territory to rescue someone – that we have seen variations on in classics such as The Searchers (1956) and True Grit (1969) but S. Craig Zahler writes it very much through the gritty realism of the modern revisionist Western.

The tone of the film is sombre, slow and filled with studied observation of the minutiae of the world. Best of all though is the writing, the play of dialogue and the slow emergence of the characters. The film becomes particularly harrowing once it gets out onto the wilderness and as point-of-view character Patrick Wilson is forced to struggle on with a broken leg, only to have their horses stolen and they forced to continue on foot and then he abandoned with a possibly gangrenous infection.

Craig Zahler is sparing when it comes to the horror elements. Among these though, you are shocked at the abruptness of the violence – the unexpected way early on that stableboy Jeremy Tardi gets an arrow in his head and then his throat slit all in a matter of seconds. Eventually when the film arrives at its destination, Bone Tomahawk emerges akin to a Western version of The Hills Have Eyes (1977). Here Zahler gives us some decidedly nasty scenes with the Troglodytes killing and gutting victims and in the to-the-death fight at the end.

What you also have to commend the film for (especially one from an unknown director) is the amazing cast line-up it manages to bring together, including names like David Arquette, Michael Paré, Sean Young, Sid Haig and Kathryn Morris in minor roles. The film features one of the best performances that Kurt Russell, now in his mid-sixties, has given in at least the last decade. (He also made a sterling return to form in another Western, Quentin Tarantino’s The Hateful Eight (2015), later the same year). As the tough, astute, well-spoken but also moral sheriff, it is a performance that makes the film. Equally good is Matthew Fox, who cuts a striking figure in white suit, sharply honed soldiering skills, ladykiller charm and casually racist attitudes that quite take you back.