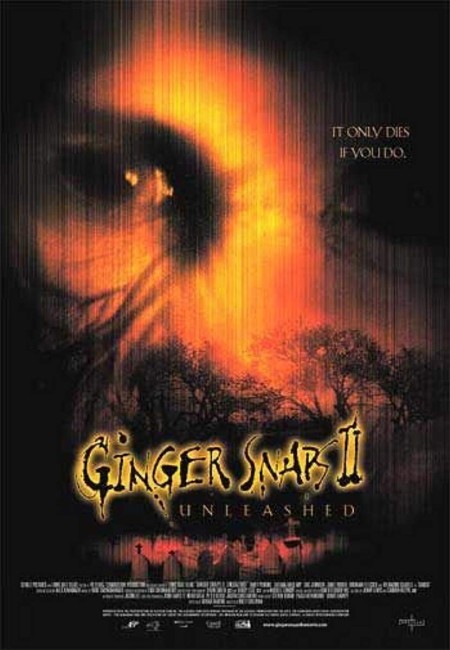 Following the murder of her sister Ginger, Brigitte Fitzgerald has gone on the run. She fights against the emergence of the werewolf inside herself and manages to hold it at bay with injections of Monkshood, or wolfsbane. She is also being pursued by another werewolf that wants to mate with her. After an attack by the other werewolf, she collapses and comes around to find that she has been placed in a drug rehabilitation facility, where it is assumed from her needle tracks that she is an addict. Unable to get to her drugs, she struggles as her werewolf nature starts to emerge. All the while, her pursuer comes closer. She then makes an escape with Ghost, a young girl from the hospital that she befriends, and together they make siege against the arrival of her pursuer in the abandoned house of Ghost’s grandmother.

The Canadian horror film Ginger Snaps (2000) was a modest success internationally, gaining reasonable acclaim due to some good word of mouth. Ginger Snaps: Unleashed was the first of two sequels and was shot back-to-back with the prequel Ginger Snaps Back: The Beginning (2004). In both sequels, the two actresses from the original, Emily Perkins and Katharine Isabelle, return, although original director John Fawcett has dropped back to an executive producer role and his co-writer Karen Walton is nowhere to be found.

One always treats the attempts to milk a franchise out of a modestly successful hit with a certain degree of cynicism – look no further than Canada’s attempts to make a series of sequels to David Cronenberg’s Scanners (1981). The surprise about Ginger Snaps: Unleashed is just how good a film it is – in fact, one is even prepared to argue that Unleashed is a superior film to the original Ginger Snaps.

What Ginger Snaps: Unleashed also takes the opportunity to do is tell a werewolf story as a psychological story. While we do see various transformations throughout, these are not conceived as big dramatic set-pieces as they were in films like The Howling (1981) and An American Werewolf in London (1981) and the film is instead concentrated on Brigitte’s inner struggle. It is fired up by striking and original images – Emily Perkins dropping an eyedropper of wolfsbane behind her eyelids in lieu of a syringe; filing her teeth down; or trying to cut back her emerging animal ears with a pair of clippers. At its most surreal, Ginger Snaps: Unleashed features a dream sequence with a roomful of girls in an encounter group all lying on their backs masturbating.

The institutional setting proves a novel location for a werewolf tale. It also provides the sequel with a story that is much more contained than the original was. There is less of the plethora of ideas and the story to not be all over the place as muchas it was in Ginger Snaps. The dialogue is sharp and often penetratingly on the ball. There is an appealing sarcasm to the characters, with writer Megan Martin using the rehab setting to make a number of potent digs at therapy and psychologists. Mostly, Ginger Snaps: Unleashed is an internal psychological story that is not dependent on any external makeup effects. It emerges, one feels, as a much better, moodier and more character-driven film than Ginger Snaps was.

Emily Perkins, withdrawn into herself and sharply intelligent, manages to give a much stronger performance than she did the first time around. Equally good is the new character of Ghost, played by a young Tatiana Maslany. Scriptwriter Megan Martin uses Ghost to sarcastically deconstruct the werewolf – Ghost gains her knowledge of werewolf mythology from a comic book, something that is turned into a striking metaphor and a genuinely surprise sardonic ending. To create the makeup effects, the film has brought on board the top drawer Hollywood shop KNB EFX Group, who provide some highly convincing werewolves, much better than the ones that we saw in the original.

Ginger Snaps: Unleashed is the film that Wes Craven and Kevin Williamson’s mega-disappointing werewolf film Cursed (2005), which was made around the same time, should have been. The only failing that one could point to is the fact that the pursuing werewolf wanting to mate with Brigitte is a nemesis that remains shadowy and unexplained.

Director Brett Sullivan, who was editor of the first film, made his debut with Ginger Snaps: Unleashed and subsequently went onto make the horror film The Chair (2007) and co-directed A Christmas Horror Story (2015).