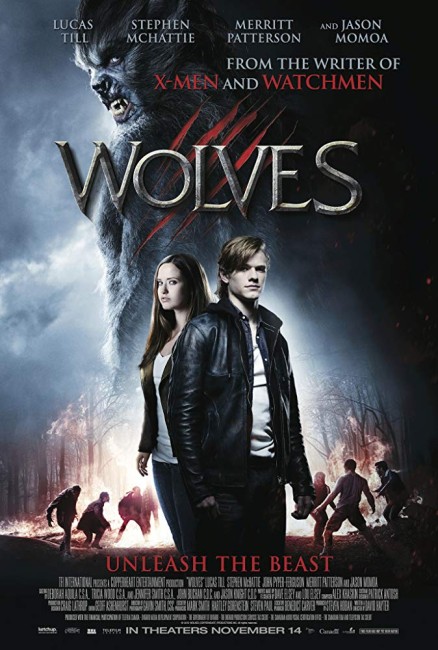 Teenager Cayden Richards does not understand what has happened when he suddenly becomes violent and attacks a rival player on the school football field. Next, while he is with his girlfriend, Cayden abruptly turns into a wolf creature. He comes around to find that he has slaughtered his parents. He flees the police manhunt and becomes a drifter. In a bar, he meets a crazy old-timer known as Wild Joe who is a werewolf too and recognises Cayden for what he is. Cayden pleads for more knowledge about his kind and is directed to the remote mountain town of Lupine Ridge. There the locals act threateningly but Cayden is welcomed by John Tollerman who offers him a job on his farm. Cayden is attracted to Angel Timmins, the owner of the town’s bar. Cayden soon comes up against Connor Slaughter, the leader of pack of wild werewolves who roam and kill as they want in the town. When Cayden learns that Connor is going to force Angel to bear him a son, he takes a stance against him and his gang.

Wolves was a directorial debut for David Hayter, who started out as an actor – mostly voice work in animation, although in live-action he played the lead role in Guyver: Dark Hero (1994). – and then became a screenwriter who has worked on high-profile films such as X-Men (2000), X-2 (2003) and Watchmen (2009). At least based on the calibre of the material he worked on as a writer, I was interested to see what Hayter would do in the director’s seat here.

Wolves starts in as something stylish and impressive. David Hayter gives it fired-up visuals – the opening football game is seen in kinetic slow-motion fragments with cuts away to larger-than-life moons, while Lucas Till takes a surreal motorcycle journey where the road behind him it lit up by coloured spotlights and projected scenery. Wolves however sits just halfway between being something genuinely stylish and another classic monster that has been repackaged to the teen crowd with young stars chosen for their handsome good looks combating supernatural forces a la tv’s Supernatural (2005-19), The Vampire Diaries (2009-17) and Teen Wolf (2011-7).

Unfortunately, the more you get into Wolves, the more it quickly pans out to be a work of style over substance. The plot we have pares down to a disappointingly ordinary one about internecine wolf clan fighting. Certainly, Hayter directs some stylish fight scenes between the werewolves and the film arrives at a suitably epic climactic showdown.

David Hayter has clearly intended Wolves to operate as a story of convoluted familial goings-on that rivals George Lucas’s Star Wars saga. There are also some problems with this (as there was also with the change of sympathies between the various Star Wars episodes and trilogies). The entire film spends its thrust building Jason Momoa up as the ultimate lawless badass and then, just like George Lucas, springs a surprise on us about his being Lucas Till’s true parent. The final scenes then reveal someone else as an even bigger badass who has improbably manipulated the whole situation before Momoa, who only a few scenes earlier was prepared to hunt and kill Lucas Till and rape heroine Merritt Patterson, is suddenly give a deathbed redemption and his badassery swept under the rug altogether. This only makes the black-and-whites the film had traded on into something weak and confused. (The other rather funny plot confusion we get is where Lupine Ridge is constantly referred to as being in the remote mountains but everything we see of the town is located on flat prairie land without a mountain in sight).

One of the best parts about the film is the casting of Jason Momoa, previously an eminently forgettable Conan the Barbarian (2011) and as Khal Drogo in tv’s Game of Thrones (2011-9) and subsequently the DC Cinematic Universe’s Aquaman. Here Momoa is made up and dressed in a way that he radiates a dangerously sexy magnetism every time he turns up on screen. The other plus about the film is some of the most impressive wolf makeup effects that one has seen in some time.