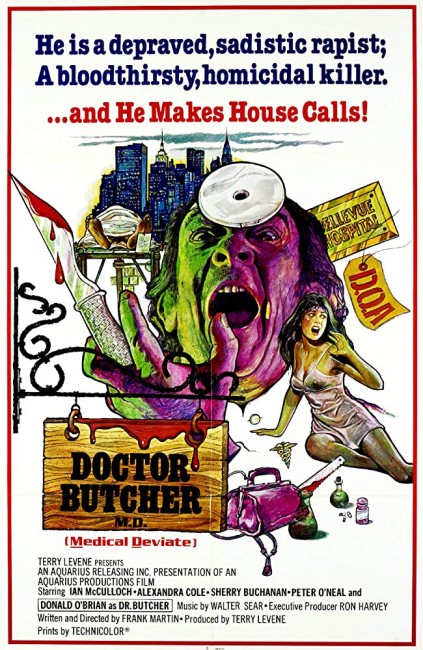 In New York City, a hospital is plagued by a mysterious deviant who is removing organs and limbs from cadavers. The orderly Toran, an immigrant from the Moloto Archipelago, is discovered devouring a heart removed from a corpse but jumps out the window before he can be questioned. Anthropologist/medical doctor Lori Ridgeway recognizes the tattoo on the orderly’s chest as belonging to the cannibal tribes on the island of Keto. She and fellow doctor Peter Chandler, along with two others, set off on an expedition to the Moloto islands to investigate. They meet Dr Obrero, a Westerner who lives in the islands, who directs them to Keto. The boat overheats and they are forced to land on a different island. In rapid course, they are attacked by cannibal tribes and several of the party slaughtered and eaten. The cannibals are then driven away by the appearance of a zombie. The group seek refuge at Dr Obrero’s laboratory on the island, only to discover that he was the one who created the zombies as part of a quest for immortality. With Lori captured and about to be sacrificed by the natives, Obrero ties Chandler up, intending to prove his theories by transplanting Chandler’s brain into a cadaver.

Italian gore cinema of the late 1970s/early 1980s has the reputation as producing some of the most extreme films ever made. First there was the Italian cannibal film, which passed through effort like Deep River Savages (1972), Last Cannibal World/Jungle Holocaust (1977), Emanuelle and the Last Cannibals (1977), Slave of the Cannibal God/Prisoner of the Cannibal God (1978), Anthropophagus (1980), Cannibal Apocalypse/Cannibals in the Streets (1980), Eaten Alive (1980) and the notorious of them all, Cannibal Holocaust (1979) and Cannibal Ferox (1981), both of which involved the actual mutilation of animals on screen.

Zombie Holocaust is one of the most notorious among these Italian zombie films. It was banned in numerous countries and listed as a Video Nasty in the UK, which seemed to be the mark of distinction that sorted the hardcore Italian gore movies from the pretenders. The uncut version of the film seen here is extremely gory – indeed, the entire film is little more than a catalogue of gut-splattering mutilations.

In the opening moments, we see a corpse anatomically opened up and then a body snatcher sawing the hand off. Elsewhere we get:- a body with its heart torn out; another scene where the orderly cuts open a body and tries to eat its heart; a maggot covered head left in Alexandra Delli Colli’s bed; a porter attacked by natives and his leg and torso gored and then his intestines spilt; a bearer caught in a trap, his throat slit, his stomach spilt open and his guts hungrily devoured by the cannibals; Peter O’Neal caught by natives, where he is gutted and then fingers plunged into his eye sockets and his eyeballs plucked out and eaten; heads are cut open and brains removed by the mad scientist; and there is the rather entertaining moment where Ian McCulloch despatches a zombie by plunging the propeller of an outboard motor into its head. The zombie makeups are not too bad – the spilt and devoured guts and body parts have an alarming realism that makes you wonder just where exactly the makeup people managed to obtain them from.

Alas, on almost any other level excepting that of extreme gore, Zombie Holocaust is tedious going. There seems almost a complete indifference to writing, acting and anything but the most basic technical cinematic competence upon the part of director Marino Girolami. Zombie Holocaust has clearly been construed as an attempt to straddle both of the abovementioned themes – the Italian cannibal film and the Italian zombie film with an improbable plot that involves both cannibals and zombies running around on a tropical island (which was in fact shot near a lakeside not far from Rome). The ludicrous conceptual straddle that the film requires has the cannibals, despite devouring half the party early on in the film, become the equivalent of the seventh cavalry at the climax.

The writing is so slack that it becomes impossible to believe the motivations of the characters half the time. There is no particular reason why the expedition to the island is mounted in the first place – an immigrant is found devouring body parts, which for some reason requires two doctors and two others to have to travel to an obscure island in Southeast Asia to investigate the tribe he came from. Yet, despite going halfway around the world on such tenuous anthropological connection, when one of the party (Sherry Buchanan) is captured by the cannibals, the surviving two just decide to pack up and leave the island – no thought of rescuing her or even checking to see whether she actually is dead. The mad scientist’s scheme, which involves trying to obtain immortality by transplanting living human brains into corpses, is biologically preposterous.

A large part of the notoriety that Zombie Holocaust has comes from when it was released in the US in 1982 by distributor Terry Levine. Levine redubbed the film Dr Butcher M.D., listed on some posters as Dr Butcher M.D. (Medical Deviate). The zombie and cannibal aspects were downplayed and the film instead concentrated on Donald O’Brien’s mad scientist, with the trailer even being edited to suggest that the mad doctor was the cannibal plaguing the hospital. Levine also purchased extra zombie footage from Tales That Will Tear Your Heart Out, an uncompleted horror anthology from Roy Frumkes, director Document of the Dead (1989), and edited these scenes into the trailer and early sections of the film.