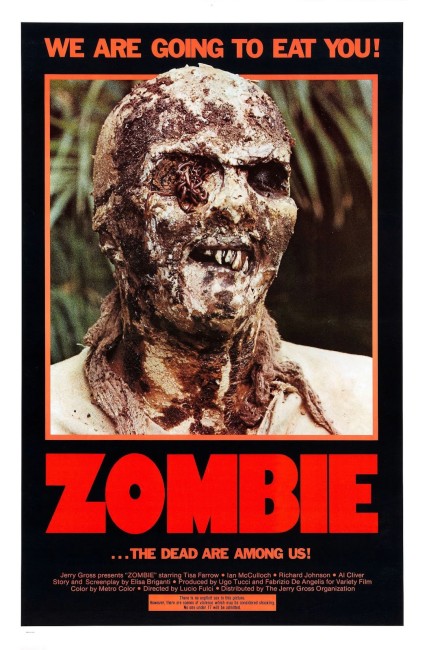 A yacht sails into New York harbour without anybody aboard. While investigating, police are attacked by zombies. Anne Bowles, the daughter of the yacht’s owner, and reporter Peter West head to the Caribbean island of Matoul to find her father. On the island, they find that the dead everywhere are returning to life, hungry for the flesh of the living.

Zombie – Flesh Eaters was also the film that launched Lucio Fulci out of the relative obscurity and allowed him to briefly shine in the early eighties as a hardcore charnel poet with such cultish gore films as City of the Living Dead/Gates of Hell (1980), The Beyond/The Seven Doors of Death (1981) and The House By the Cemetery (1981).

Lucio Fulci clearly sets out to imitate the smorgasbord of gory dispatches that George Romero offered up in Dawn of the Dead. Some of these are fairly way out – the most notable being an underwater confrontation between zombie and shark with the zombie finally tearing the shark apart with its teeth. There is an attack on a woman by a zombie, ending in the nasty scene of her eye being impaled on a shard of wood. The film builds to an impressively all-out splatter climax with the humans on the island defending themselves against the zombie onslaught.

The film certainly does not hold back on gore – in fact, it is its raison d’etre. Outside of the various gore scenes however, there is not much to the film. Zombie – Flesh Eaters exists in various cut and uncut international versions – the cut ones eliminate any reason that anyone might want to see it.

The crucial difference between George Romero and Lucio Fulci is that Romero’s films have a whole other dimension, they are apocalyptic horror films with a dark and biting social commentary. Lucio Fulci’s films begin and end with novelty gore – when Fulci has a Romero-esque apocalyptic ending here, there is nothing bleakly disturbing to it like there was at the end of Night of the Living Dead (1968), it is merely a surprise twist ending.

There are occasional moments – the opening is an eerie scene right out of Nosferatu (1922) with an empty yacht entering New York as a harbinger of doom. The zombie makeups are particularly gruesome – unlike Romero’s zombies, these zombies are rotting and oozing pus. The cast, including Mia Farrow’s sister Tisa, is unmemorable and the dubbing is sometimes several seconds out of synch.