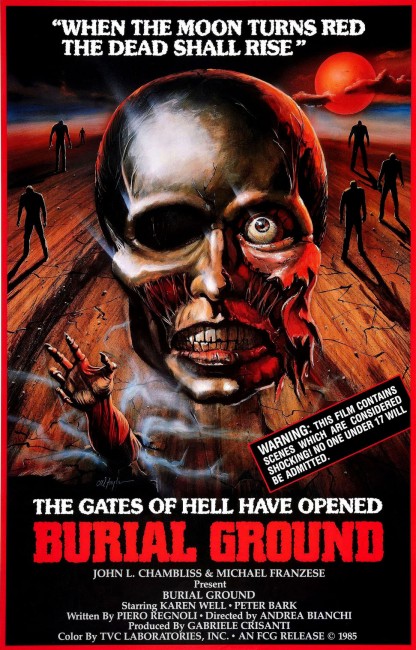 aka The Nights of Terror; Zombie 3; Zombie Horror

Three married couples head off together to a villa in the countryside. In no time at all, they are surrounded by zombies that have risen from a nearby Etruscan tomb and are hungry for the flesh of the living. The couples barricade themselves in the villa as the zombies try to force their way in. However, those that are killed in the onslaught are then raised back to life as zombies too.

The Italian zombie film (and the Italian cannibal film, which was happening around the same time) gained considerable notoriety for its willingness to go to far greater extremes than anywhere else in the world in terms of spilling gore. In fact, Burial Ground seems to have been construed for the sole raison d’etre of serving up gory blood-drenched set-pieces. We get all the what by now have become standard scenes where victims’ intestines are torn out and devoured; see a zombie having its head bashed in with a rock; heads blown off with shotguns; a nasty scene where a woman is grabbed and her eye impaled on a broken shard of glass; heads and hands hacked off with machetes; a head bashed in on the side of a bathtub.

There is an entertainingly implausible scene where maid Anna Valente looks out of a window only to have her hand impaled on the sill by a spike thrown by the zombies, who then reach up with a scythe and decapitate her, before the surreal image of them tipping her headless body upside down still impaled by the spike and reaching up to claw at her legs.

One of the most famous scenes in the film is where zombified child Peter Bark returns to his mother Maria Angela Giordano and then sinks her teeth in and bites off most of Giordano’s breast. Bark (who was actually twenty-five at the time the film was made but was cast because Italy’s labour laws would not allow the casting of children in such a film) has become a cult figure because of the role and even maintains his own website. Indeed, Bark as the son and his unhealthy, overly Oedipal attachment to his mother’s breast, is the only person in the film who receives even vaguest thing that approaches characterisation.

There is no plot to Burial Ground – the zombie attacks and gore-drenched set-pieces are all there is to it. We have hardly even arrived at the villa for five minutes when the zombie attacks begin, for instance. Other than a vaguely connected prologue sequence where the professor enters a tomb, there is no explanation of why the zombies are returning to life. Even though director Andrea Bianchi lacks anything beyond the most workmanlike skill as a director, what you cannot deny is that he conducts the zombie attacks with a good deal of energy. He milks the zombie’s presence for maximum impact and winds the basics up despite the lack of any plot.

The zombies look particularly gruesome – genuinely decayed and rotting, oozing putrescent goo. In one scene where a zombie bends over a victim in closeup, we even see worms crawling across their faces and out of an eye socket. Even though the blacked-out lips and mouths of the actors do occasionally show through beneath the appliances, these are still some of the most convincing zombies shown on screen.

The titling in the print seen here is often noticeably misspelt – ‘Nigths of Terror’ or ‘Profecy of the Black Spider’.