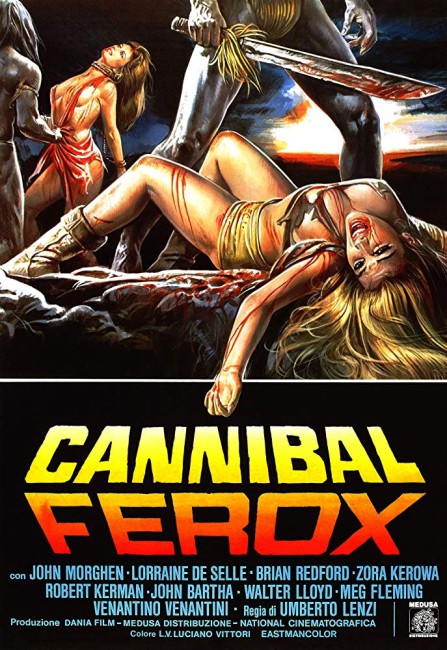 aka Make Them Die Slowly; Woman From Deep River

Anthropologist Gloria Davis travels up the Amazon to a village where there have been reports of cannibalism. She is seeking to write a thesis that proves that cannibalism is a myth of colonialism designed only to portray natives as subhuman and that it never existed in reality. She and her party encounter two adventurers who have come searching for emeralds and claim to be fleeing from cannibalistic natives. They are all then captured by the natives. There Gloria realizes that it has been the two men’s cruel and sadistic treatment of the otherwise peaceful tribe that has spurred the natives to sickening acts of cannibalism and depravity.

In the early 1980s, the Italian cannibal film had the distinction of managing to push on-screen taboos about as far as it was possible to take them (then and since). The genre was begun by Cannibal Ferox director Umberto Lenzi’s Deep River Savages/Man from Deep River (1972) and continued through the likes of Last Cannibal World/Jungle Holocaust (1977), Emanuelle and the Last Cannibals (1977), Slave of the Cannibal God/Prisoner of the Cannibal God (1978), Cannibal Holocaust (1979), Cannibal Apocalypse/Cannibals in the Streets (1980), Lenzi’s own Eaten Alive (1980) and Zombie Holocaust/Dr Butcher M.D. (1980). Many of the abovementioned titles regularly crop up on the video nasty and banned lists in various countries.

Of these, Cannibal Ferox, also known variously as Make Them Die Slowly and Woman of Deep River (in an attempt to pose it as a sequel to Umberto Lenzi’s Deep River Savages, which was retitled Man from Deep River in some places), is one of the most notorious. Indeed, the video release of the film announced with evident pride that Cannibal Ferox had been banned in 31 countries.

Many of these cannibal films have no redeeming value and exist only as a smorgasbord of extreme mutilations, including the depiction of animals being slaughtered and gutted on screen. The violence shown here is disturbing. Umberto Lenzi weakens us up first by showing some unflinchingly real scenes of animal savagery – an anaconda crushing a ferret to death, snakes being fed to lizards, the natives gutting and cooking turtles and lizards over a campfire.

The film slowly builds up to its human savagery and this is shocking when it comes – like the scene where the natives cut open and eat the intestines of Walter Lloyd, or when John Morghen gets his arm cut off at the wrist with a machete. There is the scene where John Morghen’s genitals are cut off and eaten by the native chief, which is shocking – and certainly one of the most infamous scenes in the cannibal genre. Although, it is a scene that exists more in reputation than it does in depiction on the screen – we never, for instance, actually see Morghen’s dick or any of the blood, just a shape that the chief holds up in his hand in medium shot. Much more shocking is the unflinching nastiness of the scene where hooks are placed through Zora Kerowa’s breasts and she strung up by them.

Cannibal Ferox is perhaps one of the few of these cannibal films with any redeeming merit. Unlike most of the other films in the genre, it has a message that potently questions the extremes that it serves up – the central character’s quest to deconstruct the cannibalism myth is played with much ironic regard. The ending where a shell-shocked Lorraine del Salle receives her doctoral dissertation for a paper denying the existence of cannibalism is extraordinarily cynical in light of the catalogue of savageries we have just seen.

Cannibal Ferox also has a serious underlying message (albeit a shakily anthropological one) about cannibalism being something that is imposed on natives by colonialism – Lorraine del Salle believes that cannibalism was a myth created in order to subjugate natives and this is born out by John Morghen’s drug dealer who imposes violence on the placid natives only to see it visited back on him. Del Salle has a pointed line later on, which spells it out all too unsubtly: “What a goddamn fool I was thinking I had to leave New York to find the real reason behind cannibalism. Do you realize it is us, the so-called civilized people, who are responsible for their cruelty? Us and our so-called superior society. Violence breeds violence.”