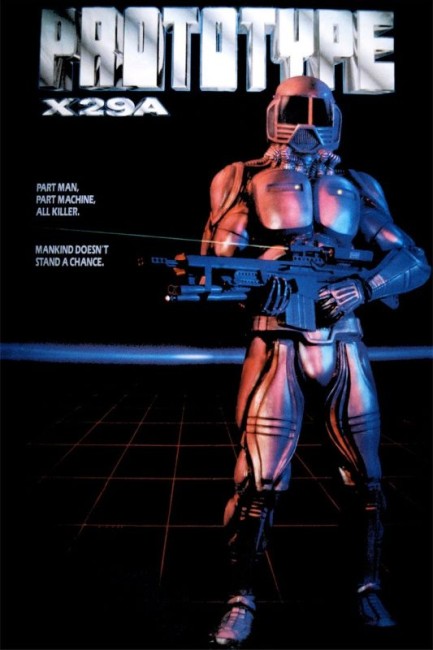 The ruins of LA in the year 2057. Twenty years ago, the Omegan cyborgs were created to subdue and control the populace in the cities but the Omegans have altered their own programming. In response, the Prototype cyborgs were created, programmed with the sole purpose of eliminating the Omegans. Now Dr Alexis Zelazny reactivates the Prototype program and uses the wheelchair-ridden Hawkins Coselaw as a test subject, placing him inside a Prototype suit. Hawkins loves Chandra Kerkorian and uses the powers the suit gives him to protect her from thugs. Chandra then makes the discovery that she has been implanted with parts that make her the last of the Omegans.

There is a potentially good film inside Prototype X29A. The burned-out Cyberpunk/post-holocaust future and the film’s cyborg super-suit themes were the usual stuff of direct-to-video sf action films during the 1990s. Amid this, the film has glimmers of promise to it – like some of its background images of the future where technology is outlawed and a burned-out hotel where a priest plays videos to redeem junkies and waves a gun.

However, Prototype X29A never gets going. The problem is largely a lack of objective. Director Phillip Roth seems so intent on building up the cut-price burned-out Cyberpunk future that nothing happens in the film. Case in point being Brenda Swanson’s scientist – through about half-an-hour of the running time we see her sitting about tapping at a computer console intercut with the main action. However, none of her scenes build to anything, they are just padding.

The film eventually gets going but when it does what is happening is not exactly clear – the pre-credits explanation builds the Omegans up as being a totalitarian cyber police force and the Prototypes as the seeming saviours designed to rid the world of them. The film then reveals that the heroine is an Omegan and that the Prototypes are the real villains. One is unclear as to whether this is the film conducting an enormously subtle reversal of expectations or is just muddled writing – somehow one expects the latter.

Someone involved in the film is clearly a fan of science-fiction literature – and not just a run-of-the-mill sf reader either – and has named characters after authors such as Roger Zelazny and Samuel R. Delaney.