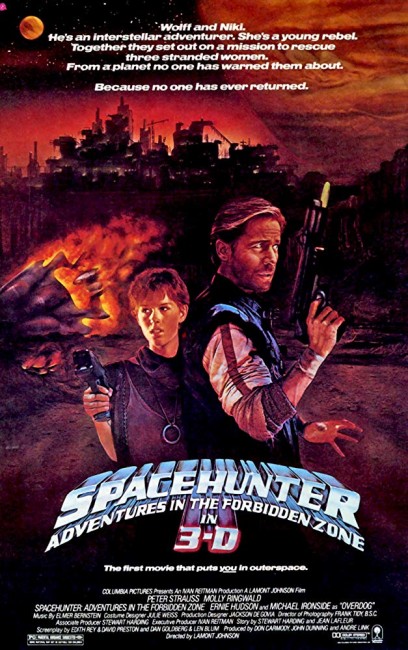 The intergalactic bounty hunter Wolff goes after the reward offered for the rescue of three girls who have been stranded on the junkyard planet Terra 11 following the destruction of their ship. On Terra 11, he reluctantly joins forces with a scruffy teenage brat Nikki and a rival bounty hunter Washington. Together they encounter mutants, amazons and bizarre oddities on the journey to rescue the girls from the lair of the planet’s tyrannical cyborg ruler, The Overdog.

Spacehunter: Adventures in the Forbidden Zone was one of the films that came out in the post-Star Wars (1977) science-fiction boom. The film seems a canny attempt to mix the intergalactic space opera of Star Wars with the junkyard future action movie look of Mad Max 2/The Road Warrior (1981).

Spacehunter was also an attempt to exploit the short-lived early 1980s 3D revival fad created by the inexplicable success of the abysmal Comin’ at Ya (1981). In fact, Spacehunter was not the only film coming out in the same year to try the mix of Star Wars, Mad Max 2 and 3D – the much cheaper Metalstorm: The Destruction of Jared-Syn (1983) also offered fairly much the same mix.

There are several Marvel Comics writers on the script of Spacehunter: Adventures in the Forbidden Zone but it is routine. At the very least, one can complement them and the film for the enthusiastic naiveté of its pulp spirit. Spacehunter is directed by Lamont Johnson, known for films like The Groundstar Conspiracy (1972), The Last American Hero (1973) and Lipstick (1976). The film was originally to be directed by Jean LaFleur, who retains story credit, but he was inexperienced and fell behind and was fired, being replaced by Johnson at a few day’s notice.

Johnson lets the film move competently enough as action adventure. He makes proficient usage of the 3D system, achieving some interesting depth effects in his cuts between closeup, medium and wide-angle shots. On the minus side, the 3D has the disadvantage of making the visual effects look less than effective. The rickety junkworld sets however are often imaginative – with the likes of a sailing ship that travels along rails, bayous made out of metal pipes shaped like trees.

Where it tends to get nauseating is in the would-be cute relationship between Peter Strauss and ragamuffin Molly Ringwald. Peter Strauss is solid but Molly Ringwald’s whiny brattishness becomes annoying. This was the second film role for Molly Ringwald who was fifteen at the time and the next year would go on to become a teen star in a host of John Hughes films, beginning with 16 Candles (1984).

Spacehunter was executive produced by Ivan Reitman, who the following year would go onto make a big splash with Ghostbusters (1984), followed by a string of other popular comedies.