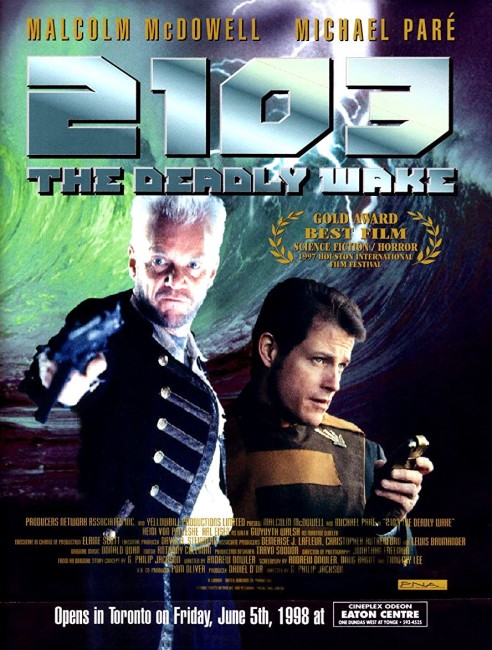 A burned out sea captain is recruited by Madeline Quiller, the CEO of Proxate, a corporation that is about to be accepted into the United Nations. She gives him a new identity as Sean Murdoch and asks him to crew The Lilith, an 80 year-old ship that is to carry a cargo of convicts to Nigeria. However, once out to sea, Murdoch discovers that they are also carrying toxic waste and the deadly virus Clarion. When it is found that there are also bombs planted aboard, Murdoch realises that Proxate does not intend them to reach their destination. However, as he tries to alter course, Quiller activates a killer android hidden aboard.

2013: The Deadly Wake is a British-Canadian co-production that was released direct to video without any fanfare. It amounts to no more than a science-fiction variant on Voyage of the Damned (1974), a disaster movie/melodrama about a shipload of people (in this case WWII Jewish refugees) stranded at sea. 2013 substitutes convicts and adds a bizarre melange of ideas covering everything from bombs, mutant baby navigators, killer androids and even Heidi von Palleske demonstrating psychic powers.

There are occasional moments that flash with an imagination that suggest 2013 in its apparent number of rewritings may have been something more interesting – ideas like the ship being navigated through neural links to baby foetuses. CEO Gwynyth Walsh delivers intriguing lines like: “Next week we become the first corporation since Disney to join the UN.” At least, there is a little more to the film than the usual business of people being hunted by monsters in dark corridors. The film does eventually bring out a killer android but this is an interesting-looking lethal killing machine in a gleaming black bodysuit and played by a dancer or mime who goes through a series of intriguingly stylised poses.

On the other hand, the film looks cheap. G. Philip Jackson is clearly not much of a director when it comes to action sequences. For that matter the ship on display is not even a hydrosphere as claimed by the film’s alternate title – hydrosphere is actually a term that refers to the watery parts of the Earth – the oceans, lakes, rivers etc. Malcolm McDowell plays another of the numerous B roles his career has been reduced to these days and proves a solid, reliable trooper. Gwynyth Walsh gives an awfully campy performance.

Director G. Philip Jackson has made a number of other science-fiction films including the dystopian Music of the Spheres (1984), Strange Horizons (1992) and Replikator (1994), as well as produced the tv series Starhunter (2000-4).