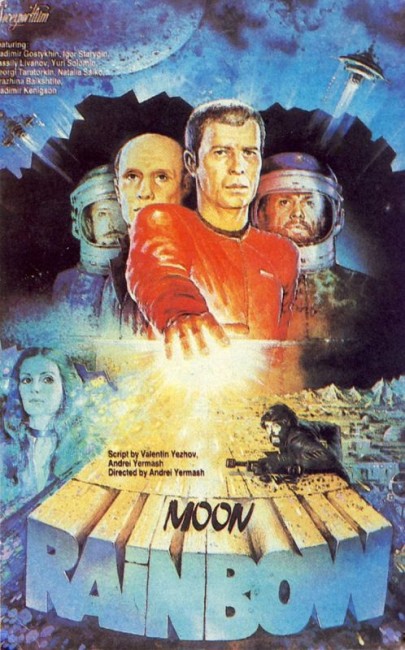 A commission is formed to examine the issue of ‘black marks’. Four men are questioned at length and asked about what happened during a mission to Uranus’s moon Oberon aboard the spaceship Moon Rainbow. Following a venture into a strange zone on the Plane of Fire Snakes, the men returned with apparent psychic powers and the ability to affect tv monitors with black marks.

Science Fiction made during the era of the Soviet Union has a fascination that is completely different to US-made science-fiction of the same era. The USSR maintained a modest output ranging from early ventures such as Aelita (1924) and The Space Ship (1936) to the heyday of the 1950s/60s, which saw works such as The Heavens Call (1959), Storm Planet (1962), Andromeda Nebula (1967), Moscow-Cassiopeia (1973) and Per Aspera Ad Astra (1981) and the odd work from other Eastern Bloc countries such as First Spaceship on Venus (1959) and Ikarie XB-1/Voyage to the End of the Universe (1963). Most of these were brought up by Roger Corman and AIP and re-edited into titles like Battle Beyond the Sun (1963), Voyage to the Prehistoric Planet (1965), Queen of Blood (1966) and Voyage to the Planet of Prehistoric Women (1968). Whereas American science-fiction of the 1950s centres around invasion and subversion from elsewhere, Soviet films are focused around the exploration of space and the spreading of the Communist ideal to other worlds. Andrei Tarkovsky’s Solaris (1972) and Stalker (1979) brought a move away from outer space to the exploration of inner space in the Soviet SF films ahead that included the likes of The Dead Mountaineer Hotel (1979), Test Pilot Pirx (1979) and Letters from a Dead Man (1986).

Moon Rainbow comes from a book by Russian science-fiction writer Sergei Pavlov, which appears to have been the first in a trilogy. None of Pavlov’s works seem to be published in English translation so it is almost impossible to come across any details about publication dates or the other books in the series. Director Andrei Yermash did go on to make one other film – an adaptation of Isaac Asimov’s The End of Eternity (1987).

Among most of the Soviet SF films mentioned above, Moon Rainbow is rarely one that gets talked about in the West or remembered. This may well have something to do with the fact that it comes with a title that either sounds like it floated out of the Age of Free Love or else is some kind of animated film for pre-teens with dancing unicorns and the like. What it doesn’t particularly suggest at all is a philosophical hard science-fiction work.

Putting a label on exactly what Moon Rainbow is is puzzling. What it resembles is Andrei Tarkovsky’s Stalker about travellers in a mysterious alien zone – this could sort of be a compacted version of Stalker with only one scene in The Zone (represented by some psychedelic lighting effects) and much more prominence given to the end scene where the kid demonstrates psychic powers. Rather than all the philosophical discussion when the travellers get inside The Zone, this gives us endless discussions about what happened from a commission formed to examine what happened afterwards.

Alas, Moon Rainbow is a film that nearly talks itself to terminal boredom. It is not that it does so in uninteresting ways but it is a film that seems without any drama (a problem endemic to much of Russian cinema). Also for me as an English-speaking viewer, I was watching a film where a good deal of it consists of densely written dialogue relayed through subtitles. These often seem to have been construed as literalistic translations rather than as sentences designed to communicate what is being said in readable English. Thus you sort of have to parse your way through the dialogue and get a general idea of what is being said, where sections of it often go by without a clue what is being said. This makes for weary viewing as nearly two-thirds of the film consists of scenes as people as they sit about and discuss the significance of the black marks and what happened on Oberon.

Even when we get past that, it is not clear what is going on. There is only a single scene with the astronauts in the Plane of Fire Snakes amid some optical effects, which seems a disappointment considering how much prominence is given to the importance of what happened there in the discussions leading up. What these are or where they come from is unclear. There is also another whole B plot about the space expedition with one of the crew thinking there is an extra man aboard that seems to go nowhere. Towards the very end, Vladimir Gostyukhin wakes up back on Earth, trying to understand what has happened, and then finds he can make things happen psychically and especially cause tv screens to fracture with what look like Rorschach ink blots. These are apparently the black marks that everyone is investigating, which does seem just a little underwhelming ie. an entire commission set up to investigate people’s ability to turn tv monitors into something resembling spilt ink patterns. Much of this could be that Moon Rainbow is part of a trilogy of books, the rest of which never ended up being filmed, where almost certainly the complete story would have made more sense.