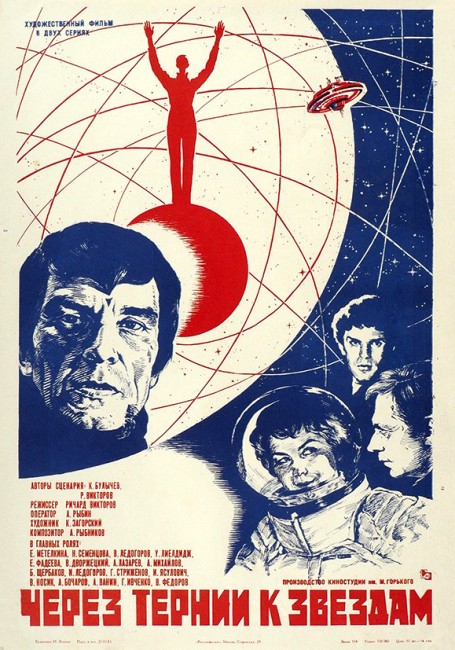 aka Humanoid Woman; To the Stars By Hard Ways

A space mission encounters an unidentified alien ship. Aboard it, the crew find an alien woman. Back on Earth, scientists try to decide whether the woman Neeya is human or an artificially created being with no memories of who she is. The scientist Serjioja Lebedev offers to house her at his home in the countryside. There Neeya comes to discover many aspects of the human world for the first time. A slow connection grows between her and Lebedev’s son Stepan. After seeing a tv broadcast about ambassadors come to ask help for their dying world Dessa, Neeya realises that this is where she comes from and must return. She sneaks aboard the spaceship Astra where Stepan has just been assigned as a space cadet as it is launched. Discovered, she is accepted aboard the mission. They must conduct an emergency detour and then return an alien ambassador home to the planet Ocean. Reaching Dessa, they become involved in helping the inhabitants of the world deal with pollution created by the industrialist Turanchoks that is threatening to make the planet uninhabitable.

In US science-fiction, the Soviet Union was always the great threat – one seeking to violate and subvert the American way of life. This has been seen as allegorical in many works like Invaders from Mars (1953) and Invasion of the Body Snatchers (1956) and most certainly literal in works that range all the way from Red Planet Mars (1952) to The 27th Day (1957) and Red Dawn (1984) to a heap of spy-fi films from the 1960s.

The reverse cannot be said of Soviet science-fiction. The USSR maintained a reasonable output of genre material ranging from early ventures into outer space such as Aelita (1924) and The Space Ship (1936) to the heyday of the 1950s/60s, which saw works such as The Heavens Call (1959), Storm Planet (1962), Andromeda Nebula (1967), Moscow-Cassiopeia (1973) and Moon Rainbow (1983), and works from other Eastern Bloc countries such as First Spaceship on Venus (1959) and Ikarie XB-1/Voyage to the End of the Universe (1963). Most of these Soviet science-fiction films were brought up by Roger Corman and AIP and re-edited into titles like Battle Beyond the Sun (1963), Voyage to the Prehistoric Planet (1965), Queen of Blood (1966) and Voyage to the Planet of Prehistoric Women (1968).

Whereas American science-fiction of the 1950s centres around invasion and subversion from elsewhere, most of the Soviet films are focused around the exploration of space and the spreading of the Communist ideal to other worlds. (Indeed, Soviet cinema never to one’s knowledge made anything akin to an alien invasion film). Andrei Tarkovsky’s Solaris (1972) and Stalker (1979) brought a move away from outer space to the exploration of inner space that was going on in American science-fiction of the decade. This marked a new focus in the Soviet films ahead that include the likes of The Dead Mountaineer Hotel (1979), Test Pilot Pirx (1979) and Letters from a Dead Man (1986).

Per Aspera Ad Astra is one of the films from this latter Soviet period. It is directed by Richard Viktorov who also made Moscow-Cassiopeia and its sequel. There are several different versions of the film in release, especially after it was restored by his son Nikolai in 2001 with re-recorded score, some new visual effects and some of the original footage trimmed down. The script is co-written by Kir Bulychyov, author of a number of Russian science-fiction novels, particularly for children.

The film also exists under some confusing retitling. It was originally screened at international film festivals under the title of Per Aspera Ad Astra, a Latin phrase that is translated as various variations on “to the stars by adversity/hardship/difficulty.” It is a motto that is used by a number of educational institutions and has placed on a commemorative plaque for the astronauts of the Apollo I space mission. Seemingly not aware of the phrase’s use in English, the film has been re-released under a translation of the title from Russian as To the Stars By Hard Ways.

One must remember that even by 1981 when Per Aspera Ad Astra was made, English-language science-fiction was not widely available in the Soviet Union. Where most of its English-language contemporaries were imitating the groundbreaking likes of Star Wars (1977) and sequels, Per Aspera Ad Astra feels more like an Italian space opera of the 1960s. Its space opera – and most certainly its special effects – looks clunky and awkward, not the whiz-bang effects trickery that took over the genre after Star Wars. The big bulky household robot is something that brings laughter to today’s cinematic audiences. In terms of alien contact, the contemporary English-language genre had moved onto the warm fuzzy alien visitations of films like Close Encounters of the Third Kind (1977), E.T. – The Extra-Terrestrial (1982) and Starman (1984), or the questions of what it means to be human or machine that we had in Blade Runner (1982). This datedness had Per Aspera Ad Astra brought up and screened as an episode of Mystery Science Theater 3000 (1988-99, 2017- ) entitled Humanoid Woman where it was subject to their deplorable habit of inserting bad jokes ridiculing the material.

I gave Per Aspera Ad Astra some rope as I thought it had potential. Certainly, much of the other Soviet science-fiction of the era is not uninteresting, if frequently stolid, and often has much better special effects than their American counterparts do. Alas, not the same can be said for this film. I was certainly interested in it during the opening sections. Yelena Metyolkina had an alienness and there is a certain fascination in watching her deal with the everyday – flying over grass because she regards it as a threat, preparing to kill Vadim Ledogorov’s girlfriend because she is an irritation, the slow opening up of her humanity and connection with Vadim – that makes it almost the equivalent of a Soviet version of Starman or perhaps even more so The Man Who Fell to Earth (1976). Unfortunately, Richard Viktorov’s direction is slow and prosaic and he does little to bring these scenes to life in interesting ways. Compare Per Aspera Ad Astra to Tarkovsky’s Solaris – Tarkovsky gives us a work that haunts the screen with its sense of alienness and mystery whereas Viktorov does not.

The other problem the film has is that it almost two films. The first half deals with Yelena Metyolkina’s arrival on Earth, her discovery of humanity as the scientists puzzle over who she is, where she came from and whether she is human or artificially constructed. The film seems to be setting itself to head in interesting directions as we wait for the answers to arrive. Only when they do, they are not that remarkable and by which time the film has headed off in other directions.

In its second half, the film becomes an outer space adventure where Yelena Metyolkina stows away aboard the spaceship Astra and then joins the mission. After a couple of other diversions, they arrive on her homeworld where they become involved in a battle to stop an evil industrialist from polluting the planet and its people. The various outer space stopovers are semi-interesting but the action becomes dull once they arrive on Dessa. The film seems to be make some big message about the evils of industrialisation and pollution – where with heavy-handed symbolism the evil industrialist is not just a capitalist but also a dwarf. Here the questions of what it is to be human that the early sections seem to be heading towards grappling with dissipate altogether.