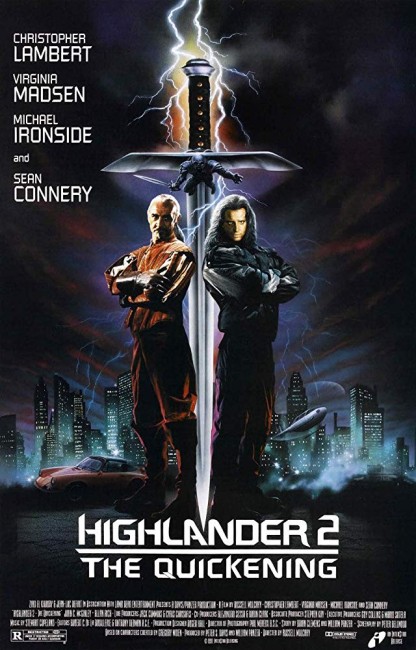 In 1999, a team of scientists led by Conner McLeod create The Shield, a forcefield designed to replace Earth’s dying ozone layer. By 2024, control of The Shield has been placed in the iron hands of The Shield Corporation and the world is humid and lightless, while society has retrogressed into mimicking the past. Environmental terrorists discover that the ozone layer has regenerated but that the Corporation is maintaining The Shield in order to control society. However, Conner McLeod is now an old man and is disinterested in doing anything. He remembers back to 500 years earlier when he and his good friend Ramirez were exiled from their home planet Zeist to Earth by the psychopathic General Katana. General Katana now sends assassins to kill McLeod. Instead, McLeod defeats the assassins and their lifeforce rejuvenates him and brings Ramirez back to life. Katana then arrives in person from Zeist to kill McLeod and Ramirez.

Highlander (1986) was a huge hit but this sequel was a flop of truly spectacular magnitude. Highlander II: The Quickening is probably one of the worst films ever committed to celluloid. The first Highlander film was a neat idea resting on a bevy of unanswered questions and managed to get by by being 80% style. However, as one sits down to watch Highlander II: The Quickening, one realises that Willian Panzer and Peter S. Davis, who both produced the original, and the first film’s director Russell Mulcahy have as many clues about what was going on as anybody else did.

Highlander II: The Quickening may make some record for the sequel that makes the least sense whatsoever in relation to its predecessor. Wild continuity gaffes abound – we learn that McLeod and Ramirez were exiled from Zeist five hundred years ago, yet the first film had the two entirely ignorant of their origin and Ramirez claiming to be a two thousand-year-old Egyptian. There is no explanation of how, if McLeod and Ramirez were alien exiles, all the other Immortals we saw in the first film managed to get to Earth and why they were divided into two camps fighting over The Prize. The first film left Conner McLeod with The Prize, which meant that he could listen to and influence every mind on Earth for good, but this appears to have been forgotten about by this film (as it was in the other four sequels and the two tv series – although, unlike the others, this does at least follow continuity in having Christopher Lambert a mortal as he became at the end of Highlander). Then there is the part that asks us to believe that an alien race has names like Conner McLeod and Juan Ramirez. When it ever seems to run in danger of actually having to explain something, the script slips in the first film’s advertising tagline “It’s a kind of magic” as a blanket explanation.

Highlander II: The Quickening‘s greatest failing however is director Russell Mulcahy’s customary penchant for broadly unrestrained humour. The vein of the film is clearly established in a scene that has an alien landing on Earth and quipping “This sure ain’t Kansas anymore” – Dorothy’s first line upon arriving in Munchkinland in The Wizard of Oz (1939). Most of the cast go at it with a shrieking over-the-top excess that makes tv’s Batman (1966-8) look like a model of restraint. Sean Connery plays entirely with his tongue in his cheek – it is probably the slightest and the worst performance he has ever given – one is certain that his eye was on the paycheque and he has no idea of what he is meant to be saying. John C. McGinley, all peals of shrieking laughter and OTT braggadocio, is awful.

The worst performance comes from Michael Ironside. From Scanners (1981) to the tv series V (1983-4) to Total Recall (1990), Ironside likes to give cold, tight-lipped and brutal performances and some people actually think all the inexpressiveness actually means he is a great actor. However, this piece of posturing camp is so utterly silly it goes beyond description – it is probably one of the worst performances ever committed to film.

In 1994, Russell Mulcahy released a re-edited version of the film entitled Highlander II: The Renegade Version (although called simply Highlander II on the credits). Here Mulcahy has attempted to go back and patch up the disaster. All references to the planet Zeist have been eliminated (sometimes clumsily in mid-sentence). Instead, the Zeist scenes are labelled ‘A Very Long Time Ago’ and McLeod and Ramirez’s exile to Earth becomes their exile into the future, while new footage shows them being exiled into the life of combat for The Prize. There are eighteen minutes of new scenes, mostly between Christopher Lambert and Virginia Madsen, which give greater strength to the middle of the film. We also see Conner McLeod’s reasons for building The Shield in a moving scene where he visits his wife dying of melanoma in a wardful of radiation victims. All of this certainly makes for a better and more coherent film, although the editorial surgery never raises it to more than mediocre.

Alas, Russell Mulcahy does not see that Highlander II‘s problems are far more wide-ranging than simply coherence and continuity to the first film. The new version fails to do anything like try and curtail Michael Ironside’s atrociously over-the-top performance, nor the fact that Sean Connery’s presence is superfluous. And in the end, none of this escapes the fact that the film was a bad miscalculation. The fact that such reconstruction is needed is surely glaring evidence that nobody involved in Highlander II: The Quickening had any idea of what they were doing in the first place.