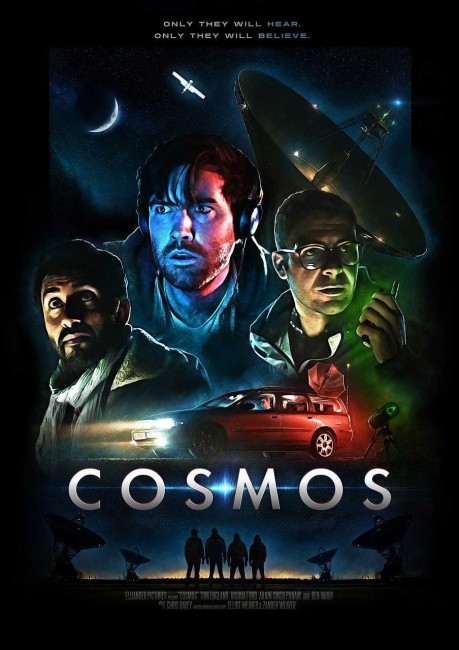 Harry Knight and two friends Mike Webster and Roy Kennedy drive to a spot in the countryside for a night of stargazing. Mike, who is trying to develop a computer program for home radio astronomy, is a newcomer to the group. He is afforded a cool welcome by Roy, who has just returned to the group after an absence. Mike learns that Roy has ill feelings over losing his job as engineer on a satellite launch. During the course of the evening, Mike believes he has found a signal coming from space. He broadcasts a message and is startled when the source broadcasts the same message back to him. Realising that this may be the first contact with alien life, he tries to gather proof of this.

Cosmos was a debut film from British brothers Elliot and Zander Weaver. The two had previously made a host of space-related documentaries for tv with the likes of Apollo 17: The Untold Story of the Last Men on the Moon (2011), The Saturn V Story (2014), 13 Factors That Saved Apollo 13 (2014), Apollo Astronauts: Training NASA’s Moon Men (2015), The Apollo Experience: Apollo 17 (2015) and NASA’s 10 Greatest Achievements (2015). The Weaver Brothers made Cosmos over a five-year period. Apparently all locations and equipment were borrowed, the film was shot with a crew of three and nobody received any pay.

There are not many films dealing with communications with alien species. It is usually assumed that aliens come speaking English, having learned it from tv broadcasts, or some other means like telepathy or universal translators. There are very few works that begin the ground-up process of trying to examine how we would communicate with something utterly alien, let alone how contact would be established across light years of distance. There have been a small handful of very good films that don’t take shortcuts and grapple with the difficulties with the likes of Close Encounters of the Third (1977), Contact (1997) and Arrival (2016), while Sphere (1998) sort of dealt with the topic even if went in different directions at the end. There was also The Visit: An Alien Encounter (2015), an excellent quasi-documentary about how First Contact would likely transpire.

Cosmos –not to be confused with the Carl Sagan series Cosmos (1980) and Neil deGrasse Tyson’s 2014 revival – comes in almost complete contrast to these other films, which use state of the art special effects to depict the aliens and ships and where the scientists are outfitted with top-drawer equipment. Rather than amazing images of Jodie Foster tapping on her laptop in front of an array of radio telescopes, almost all of Cosmos is low tech – the entire film takes place in a car parked in a field at night where the equipment is home-rigged (although we do get to visit a radio telescope at the very end). Not only does almost the entire film take place inside a car but the cast is reduced to three (barring one person who appears in the final scene and a couple of voices on phones). The aliens don’t come with amazing effects and nothing more is seen of them other than a light in the sky at the end.

The Weaver Brothers drew on their background making space documentaries and set out with an express desire to make a film showing real scientists at work. For once in a film like this, it is based around credible science, which is refreshing breath of fresh air. The Weavers take the time to explain radio astronomy to us and what the guys are doing. There is even the simple wow of Tom England showing us the colour printouts of his home radio telescope program, which come with quite a magical effect.

Into the bargain, what we have is also a strong character-driven story about the three guys and their interactions and the hurts they hide. It is a film about male friendships and bonding – one that comes without the giggly need to call it a bromance and make it into a comedy, as you invariably get in US mainstream films. There is a very nice sense where we see the characters of Roy and Harry nursing hurt feelings and of stances taken and how these emerge over the course of the evening.

The Weaver Brothers do a superlative job out of building the drama up around the message rebroadcast back from space and the attempts to triangulate the signal. Even though we are only watching things play out on a computer screen, the effect is gripping. The only point this topples over are the climactic scenes where there is much drama pumped-up and extruded drama around the failing of the hard drive and the race to get to the centre before the laptop battery fails. Also the final climactic appearance of the light in the sky is a great moment of awe but did it need to come accompanied by about five minute of swelling epic music?