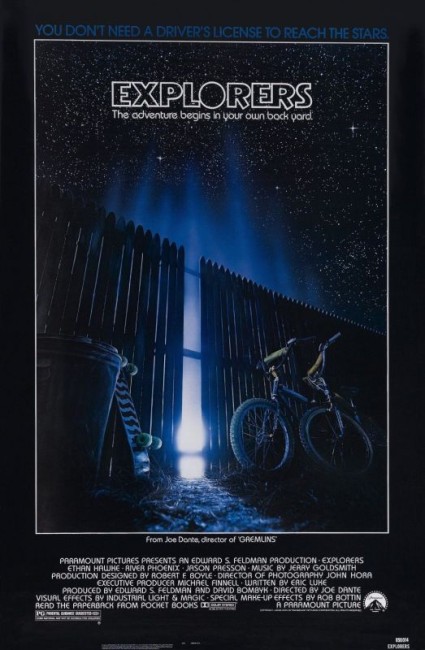 Two school friends – avid science-fiction fan Ben Crandall and science buff Wolfgang Mueller – both have identical dreams in which they are flying over a giant circuit-board. Joined by a third friend Darren Woods, they build the circuit. Once attached to a computer, the circuit creates an inertialess sphere of energy capable of penetrating through solid matter. Finding that they are able to control this by typing the x-y-z coordinates into a computer, they build a ramshackle machine in which they are able to fly about while encased in the energy sphere. While testing it out, they are pursued by the military as a UFO. Heading up into the upper atmosphere, a force takes control and draws them out beyond the Moon to a rendezvous with an alien ship.

Joe Dante first emerged to attention with two quirky B movies, Piranha (1978) and The Howling (1981), both of which come packed to the edges with sly in-jokes, cameos and spoofs of other monster and sf movies. Dante joined the Spielberg camp with one of the episodes of Twilight Zone – The Movie (1983) and then had great success with the maliciously entertaining Gremlins (1984) also for Spielberg. Next up for Dante was Explorers, which proved to be a box-office flop. Dante’s subsequent films – Innerspace (1987), Amazon Women on the Moon (1987), The ‘Burbs (1989), Gremlins 2: The New Batch (1990), Matinee (1993), Small Soldiers (1998), Looney Tunes: Back in Action (2003), The Hole (2009) and Burying the Ex (2014) – have all been middling box-office successes that only look back to Gremlins as a peak that Dante has never regained.

Part of the problem may lie in that Joe Dante makes a very specific type of film. Dante is a genre fan who is forever drawing on a childhood centred around Famous Monsters of Filmland (1958-82) magazine and B movies reruns. Joe Dante’s success came at a time when there was a fad for retro-1950s movies, remakes and genre in-referencing jokes. Alas, when that fad passed, Dante never progressed beyond it and was left adry, only making jokes about a specific era of bygone films. Explorers is probably the apex of Joe Dante’s work, one point where his perpetual in-jokes and references actually grew out into something else altogether. As with his one other really good film, Matinee, Dante restrains his tendency towards pastiche and in-joking and concentrates on plot.

Explorers is almost a conscious dissolution of every teen backyard inventor story ever written. Eric Luke writes some beautifully bittersweet characters, a triptych that seem almost core mythic figures of the genre – Ben, the science-fiction fan and stargazer; Wolfgang, the inquiring scientist; and Darren, the pessimist who is grounded in a bittersweet reality. (The former two feature two of the earliest screen performances from Ethan Hawke and River Phoenix, both aged fifteen).

Explorers evokes a beautifully genteel sense of wonder – it remains especially good, intelligent science-fiction during the exploration of the device and the realisation of its capabilities. The film has some excellent special effects with the ramshackle ship flying around the town, pursued by helicopters, crashing through a drive-in movie screen during the pastiche of a bad Star Wars (1977) clone and, in one breathtaking moment, twirling in mid-air over the nightlit entirety of the American continent.

Joe Dante and Steven Spielberg are both kids who grew up in suburbia and dreamt of flying far away and beyond. Both Explorers and Spielberg’s Close Encounters of the Third Kind (1977) and E.T. – The Extra-Terrestrial (1982) are films that begin in suburbia and dream of worlds far beyond its horizons. In Close Encounters and E.T., Spielberg dreams of the mundane being touched by something magical, of simply finding a friend out there, while for Joe Dante the dreams that lie out beyond the limits of suburbia are a heaven of endless B movie reruns.

What is interesting is the way that both Dante’s Gremlins and Explorers build on the transcendental child-like meeting with the alien that Spielberg patented. However, Dante’s vision of the suburban universe is one that is often touched by much darker things than one ever sees in a Spielberg film. Explorers is ostensibly the same sort of wondrously magic alien contact film that Spielberg made in Close Encounters and E.T., but where the aliens are not the fulfilment of all of our dreams fuelled by 1950s science-fiction, but rather reel in horror at the xenophobic messages that tv reruns of 1950s science-fiction has been blasting out to the galaxy. Explorers is a cynical film in many ways. It seems to hold a pessimistic view – that whenever we do venture out there to the rest of the universe we will be greeted by our better forgotten past.

Most of the critics of the film also jump upon the ending. Up until the introduction of the aliens, Joe Dante has restrained his trademark cartoony in-joke style with remarkable success, creating an assured and delicate sense of wonder. The aliens emerge out of nowhere like parodies of Rob Bottin’s creations for Dante’s Twilight Zone – The Movie segment, parroting tv characterizations with a manic lunacy that becomes impossible to follow. Being a Joe Dante film, the first thing he has the aliens say is “What’s Up Doc?”. Audiences found this to be too bizarre a twist in tone and Explorers went thumbs-down at the box-office.

In the documentary In Search of Tomorrow: A Journey Through ‘80s Sci-Fi Cinema (2022), Joe Dante expresses disappointment with the film, saying how it was caught up in a change of studio management and released unfinished. Even he confesses the ending didn’t work.