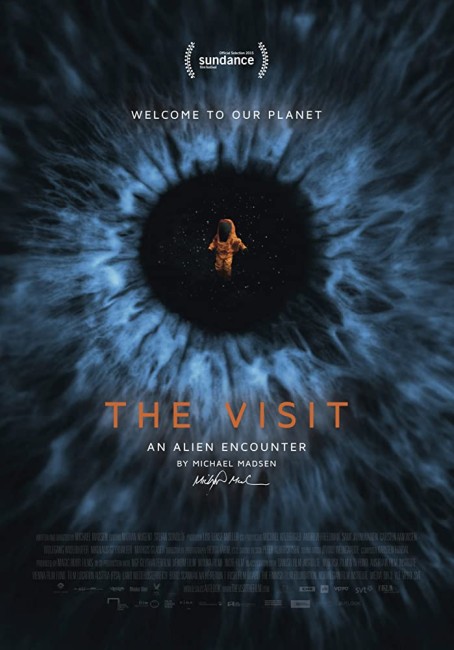 The Visit – not to be confused with M. Night Shyamalan’s Found Footage horror comedy The Visit (2015) that came out around the same time – is what you could call a speculative documentary. It is not a standard documentary as it concerns itself with events that have not yet happened but not quite fiction either as it concerns itself with real people asking questions as to what might happen in such a scenario.

Michael Madsen – not to be confused with actor Michael Madsen of Reservoir Dogs (1992) fame – is a documentary-maker from Denmark. He had previously gained some international festival attention with the feature-length documentary Into Eternity: A Film for the Future (2010) about the problems that the storage of nuclear waste presents to future generations.

The idea of the The Visit: An Alien Encounter – a look at how government, scientific and international forces would greet an alien arrival – is full of fascinating possibilities. A variety of people are interviewed – from retired astronauts, psychologists, a former Chief of British Defence Forces, SETI scientists, astrobiologists and UN spokespeople – and discuss likely reactions and scenarios. The surprise is that these come out far differently than the ways that we usually see alien first contact portrayed on the screen.

For one, we are used to alien invasion cinema being dominated by US interpretations, which almost always portrays first contact as being made by the US armed forces. By contrast, it is a great surprise to learn that in the real world the United Nations has a special task force (The United Nations Office for Outer Space Affairs) set up to deal with the possibility of alien contact (which I would be far more trusting of dealing with alien visitors than the US military).

The film even spends some debate on the question of who would be the best-suited person to go and greet the aliens, which leads to one of the film’s few moments of humour where Lord Boyce decides that this person should be a scientist but somebody who is trusted by the public – and, after scratching his head, suggests David Attenborough.

The idea that the aliens would be here to invade or with aggressive intent is quickly dismissed and the bulk of the film consists of trying to work out the next logical moves after their arrival. What follows is an intriguing series of debates about what might occur – it is fascinating to see that people have dealt with questions of how to minimise public panic, how to stop some segments of the population thinking the absolute worst, or the question of what happens if one country tries to gain an advantage over the other in dealing with the aliens. It is eye opening to realise that there are people that have thought about such notions as the legal implications of alien contact – we even get input from a theological advisor.

There are some fascinating existential questions that the interviewees ask to the camera (which stands in for the aliens) at the start – how do you think? What do you think of us? What do you see about us that we do not? We see all of the interviewees struggling with the question they are asked of having to describe what it means to be human. Or the vexing issue of how to deal with humanity’s warlike past and explain to the aliens the regular tendency of one group of humanity to kill other groups en masse – something that we rather fascinatingly learn was omitted entirely from being depicted in the Voyager 1 and 2 spacecraft sent out in 1977.

Throughout the film, former astronaut Chris Welch gets to play out a thought exercise – one that is accompanied by the visual effects team who give life to these sections – where he describes what he would experience as he places on a contamination suit and enters the craft. Here the film is at its most speculative and imagines him first entering darkness and then the simulation of an Earth library that he moves through, all the time feeling that he is being watched. The scenes remind somewhat of the hotel scenes at the climax of 2001: A Space Odyssey (1968) where aliens similarly replicated familiar surroundings for an astronaut.

The great disappointment is that he departs and the film never delves into what the actual first sighting and first conversation between human and alien would be like. I, for one, was intrigued to what the scientists would conceive alien biology as likely being or how the two species would actually communicate. This would have made what already is a fascinating documentary even more so.