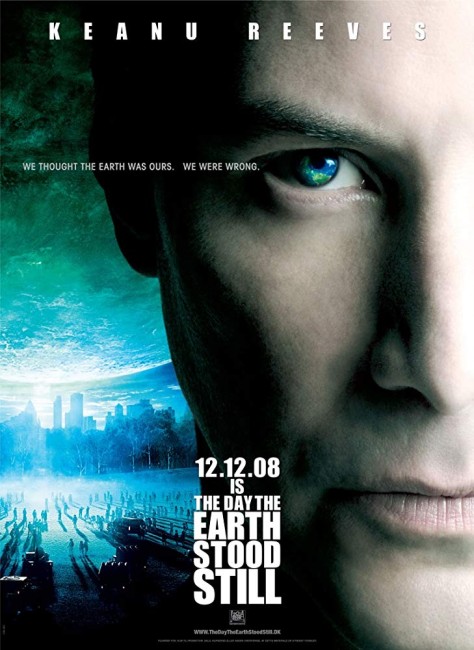 Xenobiologist Helen Benson is whisked from her home by military escort and taken to a top-secret briefing of various scientists. They are informed about an object travelling on a collision course with the Earth at very high speed. As they prepare for impact, the object slows down and proves to be a glowing sphere that lands in Central Park. As they watch, a figure in a cocoon emerges, only for it to be shot by trigger-ready military. A giant robot then appears from the sphere and neutralises all weaponry. The cocoon is opened at a secret facility and found to contain a human figure that grows to full adulthood and consciousness in a matter of hours. He tells them that his name is Klaatu. Secretary of State Regina Jackson demands that Klaatu be sedated and interrogated to ascertain the level of threat he poses. While the other scientists refuse to carry out the order, Helen volunteers but only administers a saline solution. In the interrogation, Klaatu instead paralyses the interrogator, steals his clothing and walks out of the facility. He calls Helen for help but she soon comes to realise that Klaatu’s mission is to wipe humanity from the face of the Earth, his people considering humanity too selfish and unheeding in their ways to act responsibly towards the fragile biosphere. As Klaatu activates a swarm of nanotechnological insects that devour everything in their path, Helen tries to persuade him that humanity is worth saving.

The Day the Earth Stood Still (1951) is one of the landmarks films of the Golden Age of Science-Fiction. It was made a mere six years after Hiroshima and Nagasaki and spelt out the fears that fraught the era with grim impact. The alien in The Day the Earth Stood Still represented not an invader but a superior force that had travelled across the stars to deliver a harsh warning – that humanity stop its warlike ways or else they would eliminate us. It laid the fears of the modern Atomic Age open far more starkly than any other film of the era. It is an undisputed classic.

The great surprise about the mass of science-fiction films that were made during the 1950s is that The Day the Earth Stood Still has been one of the few that have not been remade until now – with about the only remaining exceptions being This Island Earth (1955) and Forbidden Planet (1956). There were rumours of a sequel in the early 1980s, which had a script by no less than Ray Bradbury and would have featured Klaatu’s daughter returning to pass judgement on the Earth, but this never emerged. The idea of Klaatu returning in the Reagan era of nuclear proliferation has an undeniable fascination that one would have loved to have seen.

This remake of The Day the Earth Stood Still comes from Scott Derrickson. Derrickson is an interestingly controversial genre director. He first appeared with Hellraiser: Inferno (2000) and then had a worldwide hit with The Exorcism of Emily Rose (2005), a based-on-a-true-story film about a case of demonic possession that widely elaborated from the facts to the point of total fiction. It was during promotion for Emily Rose that Scott Derrickson’s personal convictions as an evangelical Christian came to the fore where it became apparent that the historic case that Emily Rose was based on had been rewritten to support this worldview. Derrickson subsequently went onto direct the horror film Sinister (2012) for Blumhouse, Deliver Us From Evil (2014) based on the supposedly true-life account of a New York detective encountering demonic forces and the Marvel Comics adaptation Doctor Strange (2016). Derrickson has also written Urban Legends: Final Cut (2000), provided the story for Wim Wenders’ Land of Plenty (2004) and produced the Christian horror film The Visitation (2006), the horror film Kirsty (2014), and Sinister 2 (2015), as well as wrote/produced Devil’s Knot (2013) based on the West Memphis Three, the true story of three teenagers in who were convicted of Satanic ritual murders on next-to-no-evidence. He was also involved with an unmade version of Paradise Lost based on John Milton’s epic poem about Satan’s rebellion against Heaven, an adaptation of Dan Simmons’ Hyperion books, and a fantasy version of the Biblical story of Goliath.

The Day the Earth Stood Still 2008 should more correctly perhaps be regarded as a reconceptualisation than a remake. The entire era that the original belonged to has changed so that there is no way a straight remake would have worked anymore. With there no longer being a fear of imminent nuclear devastation in a post-Hiroshima world, the film’s message is snappily updated into an environmental one with Klaatu coming to deliver the warning that the Earth is a fragile biosphere and humanity must be eliminated because their unheeding ways are destroying everything. Many images have been reconceptualised here – Klaatu’s seamless silver flying saucer has been dumped for a series of glowing spheres; while Gort is reimagined still with the same shape and single roving, glowing eye but about 60 feet tall. Indeed, Klaatu is no longer even a humanoid alien but an alien who generates a body from scratch and only occupies human form temporarily.

The story follows the same essentials as the original – alien visitor arrives; military react with threat and shoot it, before its giant robot companion neutralises their weaponry; alien joins human woman and observes ordinary life through her eyes. On the other hand, a number of scenes are missing. There is no death and temporary resurrection of Klaatu at the end – this was something that had the original film interpreted as a Christian allegory and led me to think that Scott Derrickson would have amplified these aspects given his religious proclivities – but such is not the case. Indeed, the end the remake reaches is an abrupt and somewhat anticlimactic one where Klaatu simply turns back the swarm and departs, not even having addressed the UN or any gathered scientists.

I did not have high expectations of The Day the Earth Stood Still 2008 but the good news is that Scott Derrickson does a decent job with his version. One is immediately captivated by the urgency of the scenes where a military escort whisks Jennifer Connelly to Washington. During the briefing scene, screenwriter David Scarpa engages in a scrupulous effort to make the science credible and not talk it down to the audience with impressive results. Then comes the arrival of the sphere where the cocoon emerges out of the glowing lights and is shot down, followed by the fabulous image of a gigantic Gort appearing and, contrary to what one expects, not melting the soldiers’ weaponry but neutralising them and then reaching down to Klaatu. The following scenes with the birthing of Keanu Reeves from the cocoon, the interrogation and his escape from custody hold an equal fascination. Scott Derrickson’s sense of something immense occurring and the cold alienness of Keanu Reeves’s performance and his calm insistence that there is nothing the government can do creates a magnificent thrill. It is here that you start to think that Scott Derrickson is going to do great things with The Day the Earth Stood Still.

Only, the second half fails to work as effectively. Derrickson drives passable suspense with the scenes of Keanu Reeves and Jennifer Connelly fleeing across the countryside. It is just that one keeps expecting these scenes to build to something but they never do. The emphasis in the second half tends to be far more on special effects spectacle as the nanotech swarm is released, causing mass destruction. A scene where Keanu Reeves visits another alien envoy (James Hong) is an intriguing addition – but when Keanu directs Jennifer Connelly to stop off at a McDonald’s the effect is laughable, reminding one of the blatant product placement commercial that came in the inane Mac and Me (1988).

Keanu is eventually convinced not to destroy the Earth and to turn the wave of destruction back but what is missing from these scenes is any sense of an emotional connection, of seeing Klaatu transformed by what he sees or feels. There is the odd scene with Jaden Smith changing his views but when all that Keanu’s reason for changing his mind about destroying the Earth seems to be based on is seeing Jennifer hugging Jaden, the results are underwhelming. Also the climactic scenes are disappointingly lacking in any of the original’s grand speech of warning and only feature an anticlimactic scene where Keanu Reeves boards the sphere and departs for the stars again. It ends the film on an abrupt note where you feel it should have built to something amazing. Jennifer Connelly never even gets to utter the immortal line “Klaatu Barada Nikto.”

The Day the Earth Stood Still joins a number of films of the late 2000s that include The Day After Tomorrow (2004), the remake of War of the Worlds (2005), George A. Romero’s Land of the Dead (2005) and Diary of the Dead (2007), I Am Legend (2007), The Mist (2007), Cloverfield (2008), The Happening (2008) and Knowing (2009), which can be called catastrophe films that have been made as responses to 9/11 and the Iraq War. These have all imagined the human race or isolated sectors of it facing an overwhelming catastrophic force. War of the Worlds laid hope in one man’s desire to reunite with his family; I Am Legend sought hope in religious belief and divine purpose, whereas The Mist saw that that very religious belief would lead to superstition and mob rule that would tear apart any reasonable attempt to deal with the disaster; The Happening saw that any attempt to rationally understand things was futile; in Diary of the Dead, George A. Romero championed the fight to tell the unadulterated truth about what was happening in an era of government spin; while Land of the Dead saw that even after the holocaust the rich would still be attempting to screw the havenots for all they could; and both The Mist, Cloverfield and Knowing take a bleakly fatalistic view that no matter what people do there seems nothing they can do in the face of disaster, even when they make all the sensible decisions.

One of the most fascinating aspects about The Day the Earth Stood Still 2008 is in seeing how the original has been reconstructed as a disaster movie in the vein of these George W. Bush-era catastrophe films. Klaatu’s message is now a direct attack on the hawkish attitudes held by the Bush government during this era where the US government is coldly told that the Earth is not theirs to own, that concepts like claiming the sphere invaded US airspace has no meaning. In one heavy-handed connection, Scott Derrickson even includes the character of Jaden Smith’s Jacob who is hurting for his father who was killed during Operation Enduring Freedom (the War in Afghanistan), leaving Jaden wanting to blankly kill the aliens in revenge, but who comes to mellow his attitude throughout.

Like Roland Emmerich in The Day After Tomorrow, Derrickson and David Scarpa go out on a limb taking on the Bush government’s record on environmental policy and wilful denial of global warming by creating an abrupt threat that punishes the entire human race for its lack of ability to get its act together globally. The solution that the film asks us to opt for is an interesting one – again an echo of the original film – that thinking in terms of national boundaries and territorialism is one that will ultimately doom the human race and the solution can be found in expanding our thinking to accept a responsibility for the way we treat the entire planet.

The Day the Earth Stopped (2008) was an Asylum mockbuster copy.

(Nominee for Best Adapted Screenplay and Best Special Effects at this site’s Best of 2008 Awards).