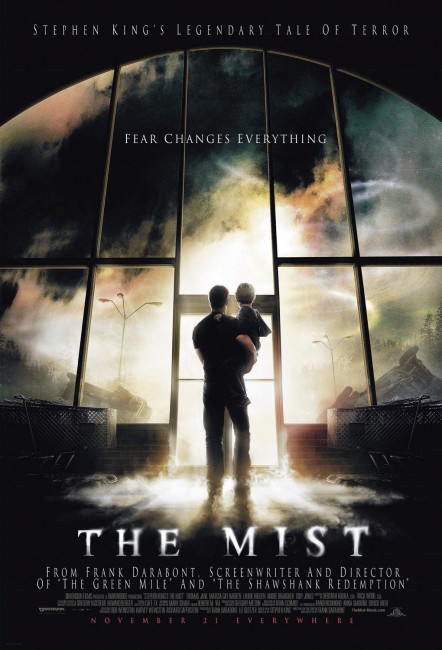 A storm causes a tree to crash into the home of David Drayton, a movie poster artist living in Castle Rock, Maine. David and his son drives into town with neighbour Brent Norton. While they are at the local supermarket, a bank of mist comes in and rapidly covers the whole town. A man suddenly runs out of the mist, screaming about things in it that are killing people. Those in the store barricade the doors as the mist clouds all visibility outside. While some of them are trying to open the rear loading dock door, a tentacle forces its way through and drags away one of the store clerks. The others have difficulty believing this. A sceptical Brent leads a group out into the fog to get help, only for them to be devoured. The others huddle in the store through the night, having to deal with an infestation of strange insects. Mrs Carmody, a religious fundamentalist, starts to preach how this is God’s judgement. As events give the impression that what she says appears to be coming true, the others in the store sway to her side and begin to turn against David and the others as they argue for pragmatic common sense.

Frank Darabont is a director who has, rightly or wrongly, become identified with Stephen King adaptations. The Mist is Darabont’s third Stephen King work, following The Shawshank Redemption (1994) and The Green Mile (1999). And not to forget that Darabont made his debut as director on an earlier short film adaptation of Stephen King’s The Woman in the Room (1983) about a son contemplating euthanizing his mother. The Mist is adapted from a novella that appeared in the Stephen King short story collection Skeleton Crew (1985), which Frank Darabont first announced interest in filming back in the early 1990s. As The Mist came out, Darabont also announced further plans to make a film out of one of Stephen King’s Richard Bachman novels, the dystopian The Long Walk (1979).

Since his appearance as a director in the mid-1990s, Frank Darabont has gained considerable mainstream acclaim (and awards nominations). Darabont’s reputation rests on The Shawshank Redemption, which is widely regarded as a classic – it holds no less than the No.2 spot on the IMDB’s Top 250 films list, for instance – probably because of its message of earnest belief in striving against an unjust system. Frank Darabont’s subsequent films – The Green Mile and The Majestic (2001) – similarly buy into this earnest message-to-Middle-America theme. One commenter wittily referred to Darabont’s films as “weepy chick flicks for guys.”

While The Mist was seen by some an experiment in genre on Frank Darabont’s part, what is forgotten or overlooked is that Darabont’s native genre is horror. He began writing scripts for various horror films including A Nightmare on Elm Street III: The Dream Warriors (1987), The Blob (1988), The Fly II (1989), Mary Shelley’s Frankenstein (1994) and episodes of Tales from the Crypt (1989-96), before making his feature-length directorial debut on the horror tv movie Buried Alive (1990). Several of Darabont’s subsequently announced projects also remain within genre material, including his long-announced remakes of Ray Bradbury’s The Illustrated Man (1951) and Fahrenheit 451 (1953), as well as his launching the hit tv series The Walking Dead (2010– ).

Going on the bulk of Frank Darabont’s work as a director, you expect The Mist to be a horror film about how a catastrophe ends up healing and bringing a community together or some such upbeat message. The surprise about The Mist is the way that Darabont subverts these expectations. Within the first few moments of getting the group in the supermarket, for instance, he gives us a mother plaintively begging someone to accompany her back home to the kids that she left on their own. In any standard film, a bunch of guys would jump to the aid and form a rescue party – but here even our nominated hero Thomas Jane has to decline out of self-interested concern for his own son. Darabont then has the woman go out into the mist on her own – but while you sit waiting for something horrible to happen, nothing does.

This signals that Darabont is delivering a horror film where the old cliches and the comfortable certainties about heroic morality that would kick into effect in a more generic horror film are no longer in play. If there is a film that one should look to in comparison it would surely be George A. Romero’s Night of the Living Dead (1968), which likewise shot out all guarantees of heroic certainty, had the survivors split into arguing amongst themselves and arrived at a similar bleakly downbeat ending.

Frank Darabont builds the tension beautifully throughout. Part of the eerie unexpectedness of the film is not even knowing what type of menace is going to materialize each time. The appearance of the insects at the window turns from something momentarily wondrous into a nightmare that spirals out of control until the entire supermarket is in chaos. In many ways, The Mist is an H.P. Lovecraft film about the appearance of indescribable horrors from the good old Lovecraft standby of other dimensions.

Frequently, Darabont leaves much to suggestion – the scene where Andre Braugher leads his men out into the mist takes place with the tension of the scene being indicated by nothing other than the slackening and tightening of a rope and then abruptly the severed bottom half of a body thrown back into frame. A perfect balance is kept in the scenes arguing over raising the loading dock door where the mano-a-mano confrontations are abruptly thrown awry as the tentacle appears under the lee of the door and starts dragging Chris Owen away. The fact that the world has been transformed into something genuinely alien is never better signalled than a scene near the end where the ground around the car shakes and then the camera pulls back to wide angle as a leviathan the size of a skyscraper strides across the landscape.

Far more than the horrors lurking in the mist, what Frank Darabont has created is a film about the way that people confront a crisis. As much as anything, this is a film about the fear, disbelief, self-interest, stupidity and superstition that emerges in the face of a devastating threat that dislocates people’s certainties about the familiar. Indeed, while The Shawshank Redemption, The Green Mile and The Majestic were about basic human decency and the wholesomeness of community spirit, The Mist is almost the exact opposite. As the group debate about whether to abandon the others and set out on their own, it is only Laurie Holden who stands up to protest about this while the others in the group give some argument about the stupidity of the mob behaviour and how humanity is doomed in its thinking. As horrible as any of the monster scenes are those where Marcia Gary Harden’s religious lunatic starts swaying the crowd, and especially where she whips them into a frenzy to turn on soldier Sam Witwer, blaming him for the catastrophe, before the group stab and then throw him out into the mist.

The Mist joins a group of films that came out in the late 00s about ordinary people confronting overwhelming catastrophes. Others amid this mini-fad include Signs (2002), War of the Worlds (2005), I Am Legend (2007), Cloverfield (2008), The Day the Earth Stood Still (2008), Knowing (2009) and 2012 (2009). All of these are post-9/11 disaster films. Where most previous big-scale disaster films – good examples being Independence Day (1996) or Godzilla (1998) – are concentrated on putting on massive displays of mass destruction for our enjoyment, these films focus on the attempts of ordinary people to cope with disaster. War of the Worlds sought hope in one man struggling to reunite with his family; both Signs and I Am Legend turned to religion, the former seeing that everything was preordained and the latter seeking hope in human sacrifice and redemption; while Cloverfield had someone trying to connect with a loved one but eventually saw no hope at all.

The Mist is probably the most pessimistic of these in that it sees when disaster strikes that religious superstition and self-interest will triumph over decency, community-mindedness and rational cool-headedness. Indeed, while both Signs and mutedly I Am Legend see faith as a source of hope in the face of disaster, Frank Darabont sees faith only as an ignorance that is at loggerheads with common sense. You could argue that Darabont is making an oblique comment on the recent massive resurgence of conservative fundamentalism in the US and how closely this is tied to 9/11 fears.

However, what confirms The Mist as a classic is its ending. [PLOT SPOILERS]. Notedly, Frank Darabont has changed what Stephen King had in his novella, which merely ends with the group driving off, not knowing what lies ahead and the hero leaving his journal behind as testament. In the novella, Drayton contemplates killing the five of them with his four bullets but decides not to. However, Darabont has blown this up to an infinitely more shocking ending where he has Thomas Jane actually shooting the other four in the car, including his son, believing there is no hope for them. Then comes the truly terrifying kicker immediately after as Thomas Jane looks up and hears a rumbling that then proves to be a tank pushing its way through the mist, which miraculously clears to reveal a detachment of the military come to save the day. It is a long time since one has seen a film that ended with such a shocking jolt as this. In promotional interviews, Stephen King said he wished he had thought up such an ending himself. (Frank Darabont even had it contractually written that the studio could not alter the ending). It is something that guarantees The Mist is going to be regarded as a classic in years to come.

Frank Darabont has corralled an excellent cast of moderately known actors. Thomas Jane has the resolute certainty of a hero – with lantern jaw, he even seems like the cut-out hero from a 1940s matinee serial. There are some excellent other performances, particularly from diminutive British actor Toby Jones who is exceptional in his performance of fearful uncertainty and cautious good sense as one of the supermarket clerks. Of course, Marcia Gay Harden holds much of the show with an alarming madness in her performance as a religious fundamentalist.

The Mist (2017) was a tv series based on the same story but was cancelled after ten episodes.

(Winner in this site’s Top 10 Films of 2007 list. Nominee for Best Adapted Screenplay and Best Actress (Marcia Gay Harden) at this site’s Best of 2007 Awards).