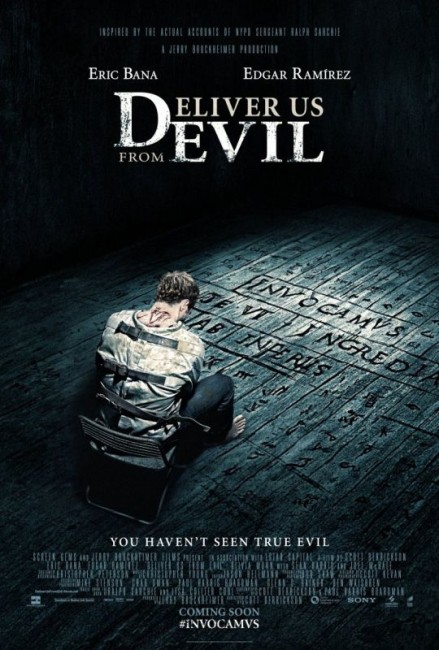 Ralph Sarchie is a sergeant on the police force in the South Bronx. He has an uncanny ability to pick routine cases that always seem to contain an element of the bizarre. In short order, he and his partner deal with a domestic disturbance call where a crazed man has beaten his wife and then with Jane Crenna, a woman who threw her baby into the lion enclosure at the zoo. In investigating an incident where a family are afraid of noises in their cellar (which turns out to house a dead body), Sarchie finds a connection between the cases – all feature three soldiers who served together in Iraq in 2010. Missing from the trio is Mick Santino who may have become possessed while in Iraq. Following his trail, Sarchie encounters Father Mendoza, an unorthodox Catholic priest who believes that a very physical evil force is behind these incidents. In trying to stop the demon possessing Santino, Sarchie must rediscover the faith he gave up as a child.

Scott Derrickson is a director that seems to polarise people. His name turns up on the various IMDB Worst Director lists and his films individually receive responses that are all over the map. He is a director that is frustratingly unable to swing my own opinion one way or the other. I often dislike his films and yet every so often his oeuvre holds a surprise or two. His first film as director Hellraiser: Inferno (2000) was one of the better sequels in the series and yet his first studio film, The Exorcism of Emily Rose (2005), was a cliche ridden possession and exorcism film that made extremely bogus claims to be based on truth. Emily Rose also laid bare Derrickson’s personal beliefs as an evangelical Christian. I expected little of his next film, the remake of The Day the Earth Stood Still (2008), and yet he managed to find things inside the material that impressed. His fourth film, the horror film Sinister (2012), received accolades as something extremely scary in a number of quarters and yet I remained indifferent to his well-worn and not terribly well connected bag of tricks, while he did far better than expected with the adaptation of Marvel Comics’ Doctor Strange (2016).

Deliver Us From Evil – not to be confused with the fine Danish thriller Deliver Us From Evil (2009) – does little to impress. The true life possession and exorcism story has been conducted by a number of other films over the last few years, most of these taking their lead from the success of Emily Rose – see the likes of Possessed (2000), Blackwater Valley Exorcism (2006), The Rite (2011), The Possession (2012), The Conjuring (2013) and The Crucifixion (2017).

Deliver Us From Evil is based on the true-life experiences of Ralph Sarchie who spent twenty years on the NYPD in the Bronx’s 46th Precinct. During the 1990s, Sarchie became convinced of the reality of demonic powrs and became a practicing exorcist, leaving the force to do so full time in 2004. He published a book Beware the Night (2001), co-written with Lisa Collier Cool, about his experiences. Scott Derrickson met with Sarchie in the early 2000s and it was reportedly Sarchie who turned him onto the case of Annelise Michel that became the basis of The Exorcism of Emily Rose. After taking a drubbing for his fictionalisation of the Annelise Michel story, the credits for Deliver Us From Evil merely note that it is ‘inspired’ by the experiences of Ralph Sarchie – Derrickson incorporated some of the happenings recounted in Sarchie’s book but essentially invented the connecting narrative about Mick Santino.

Sarchie claims to be a Traditionalist Catholic (one who rejects the liberalisations of the Second Vatican Council and prefers the Latin Mass among other things). I don’t hold Sarchie’s beliefs against him but I dispute the existence of demons – something that it should be pointed out is only very sketchily introduced in The Bible and where most modern religious thinking on possession is no more about cliches derived from The Exorcist (1973). Even then, I am still unconvinced that there is anything other than mental illness, let alone that Roman liturgy and an organisation as chequered and as rigidly dogmatic as the Catholic Church would be designated the front line of defence against such forces. Sarchie is welcome to believe otherwise but what is not apparent from his book is anything that comes out and clearly makes his case. As surely proof of Sarchie’s lack of theological credibility, look no further than his certainty that the Amityville Horror was real (when in fact it was a later proven hoax); that The Necronomicon is a text among demonologists (when in fact it was an invention of horror writer H.P. Lovecraft); and that he himself wields a shard of the True Cross as a weapon against evil forces.

As it opened, I felt immediately disappointed with Deliver Us From Evil. Scott Derrickson’s style seems all appropriated brooding imagery – perpetually rain-field night skies, loud ominous thrumming effects pounding on the soundtrack, flickering half-lights and bulbs that are as dim as possible if not constantly blowing out. For someone who is an evangelical Christian and takes the idea of demonic possession seriously, Derrickson’s depiction of possession, exorcism and deviltry is all frustratingly cliched B-movie standard – people with disfigured features conducting unusual contortions of the body or talking in croaking voices, foreign languages and cryptic phrases (for some reason, the demonic forces seem hung up on The Doors), ritual incantations in Latin, levitations, sinister figures in Goth makeup. Not to mention lots of tiresome fake jump effects – faces leering out of video screens, cats making very un-cat-like hisses and screams and so on. In its first hour, Deliver Us From Evil slips into a tedium in this regard. We feel like we have seen everything before and that Derrickson is drawing overly familiar material out into the overinflated.

But then surprise me if Deliver Us From Evil doesn’t suddenly get interesting – and moreover for the very reasons that made The Exorcism of Emily Rose dull, the point when Derrickson starts delving into matters of Christian faith. I don’t believe but I don’t disparage Scott Derrickson his faith. What does bug me about his films though is how I keep waiting for him to stop rehashing horror cliches and parse through the material to find something that is personal to him. This finally occurs here about two-thirds of the way through the film where Edgar Ramirez’s priest starts explaining faith to Eric Bana. Ramirez gives a handsome and charismatic performance in the part that proves rather captivating, especially in the way his character defies what we expect of a priest and is shown to be both worldly and with a colourful past.

The film then becomes one where Eric Bana undergoes a well-worn character arc that goes all the way back to The Exorcist – the non- or lapsed believer who is persuaded of the reality of the supernatural by what he must deal with first hand. This is nothing too unusual, indeed is fairly much the same story path that The Exorcism of Emily Rose took, and yet Eric Bana inhabits the central role with a lean and physically focused presence.

The writing of the various discussions on matters of faith is strong enough that it makes you sit and watch – you feel like Scott Derrickson has stopped regurgitating cliches and is trying to explain matters real to him – and does so in often persuasive terms that the general audience can grasp. These sections move beyond the cliche claptrap of dull scares and Deliver Us From Evil sort of becomes a Se7en (1995) by way of The Exorcist wherein a detective in a grimy, dimly lit inner city area must face an enemy that forces him to confront spiritual morality, eventually culminating in the nemesis making an attack on his own family. Not to mention that Derrickson gets everything together for a barnstormer of a climactic exorcism that throws in all the bags of tricks – contortions, croaking voices, threats, psychological taunting, even physical storms inside the room – with highly entertaining regard.