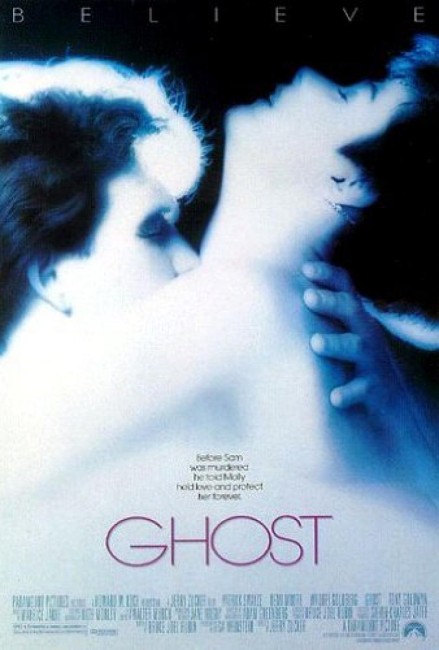 Walking home with his girlfriend Molly Jensen, bank executive Sam Wheat is attacked by a mugger. During their struggle, the gun goes off. Afterwards Sam finds himself standing over his own body and discovers that he now exists in a limbo, unable to touch or be seen by the living and passing through physical objects. Moving through this world, Sam learns that his killing was not a coincidence, but was planned by co-worker Carl Bruner after Sam accidentally uncovered a money laundering scheme at the bank, and that as a result Molly’s life is now in danger. Sam then discovers that fake medium Oda Mae Brown is capable of hearing him. However, his only means of warning Molly is by convincing Oda Mae to place herself in danger and expose Bruner’s scheme.

Ghost was part of a sudden interest in afterlife themes that emerges in 1990. Steven Spielberg’s guardian angel fantasy Always (1989) had started the interest. Always sputtered out at the box-office but it was enough to create a groundswell that produced Ghost, which became the No 1 box-office film of 1990, along with other explorations of the afterlife that included Jacob’s Ladder (1990) and Flatliners (1990).

Ghost is what Hollywood calls a ‘high-concept’ film. Screenwriter Bruce Joel Rubin has clearly spent time thinking out his central premise and it becomes fascinating to see all the traditional elements of the ghost story – possession, mediumship, poltergeist activity, haunting and so on – rung up from the ghost’s point-of-view and played with a refreshing matter-of-factness.

There are odd moments when plot convenience get in the way of logic – like failing to explain how ghosts are able to walk on substantial stairs when they pass through everything else, or how Patrick Swayze can make a jump from train to train – surely if the ghosts pass through everything inertia would carry him through the wall on the other side? (One also questions how it would be possible for Tony Goldwyn to have transferred the money into the accounts in the first place if he did not have the computer password). Not to decry Bruce Joel Rubin, he is a most adept plot-master. While the murder plot exists solely to spin out drama, Rubin manages to whip it through a tensely compounded series of twists with a torturous corkscrew irrevocability.

Underneath it all, Ghost pertains to an easy formula – popular box-office casting with names like Patrick Swayze, Demi Moore and Whoopi Goldberg, the revival of a golden oldie song that ended up being a huge charts hit all over again. The eschatological imagery is disappointingly traditional – a conventional Christian affirmation of life after death with a Hell represented by shadowy leftover Jawas and a Heaven represented by indistinctly glowing angelic hosts and distant slightly off-coloured fields, all overlaid with a just-rewards to the good and punishment of the wicked-type morality. The film’s wilful avoidance of any controversy is best demonstrated by the love scene where Whoopi Goldberg allows Patrick Swayze to take over her body so he can hold Demi Moore again, which then predictably has the love scenes played out by Swayze instead of Goldberg thus avoiding any hint of lesbianism that such a scene naturally implies.

Patrick Swayze profiles and emotes with earnestness but delivers nothing that one could actually call a performance. Demi Moore plays blankly inside a passively written role. There is no chemistry between the two of them – a love scene full of dry-humping actually draws more attention to the patent aversion of nudity than anything else. It is not until the entrance of Whoopi Goldberg – shamelessly running through a list of Latino names to get one her customer recognises and an hilarious sequence conning her way into the bank, slightly misinterpreting Patrick Swayze’s instructions and erroneously elaborating stories – that the film gains vitality. After the point that Whoopi Goldberg comes in, the film works surprisingly well within the parameters it skirts for itself. Wisely, it makes no apologies for sentiment and its traditional reaffirmations, and goes only upwards from there. And the results are unexpectedly gratifying.

Scriptwriter Bruce Joel Rubin likes these types of eschatological speculation fantasies. He had previously written Brainstorm (1983), which featured a virtual memory recording device that accidentally recorded someone’s dying experience, even Wes Craven’s Deadly Friend (1986) about a teen boffin resurrecting his girlfriend from the dead. The same year as Ghost, Rubin wrote the deathdream film Jacob’s Ladder (1990), and would go onto write and direct My Life (1993), which centres around a dying man’s testament to his own son. Elsewhere, Bruce Joel Rubin has also written the teen psychic powers film Zapped! (1982), the end of the world melodrama Deep Impact (1998), the talking mouse boy fantasy Stuart Little 2 (2002), The Last Mimzy (2007) about children’s toys from the future, and The Time Traveler’s Wife (2009).

Ghost was the solo directorial debut of Jerry Zucker. Along with his brother David and Jim Abrahams, Zucker had co-directed and co-written the popular screwball movie parodies Airplane/Flying High (1980), Top Secret (1984), The Naked Gun: From the Files of Police Squad (1988), as well as the Danny DeVito comedy Ruthless People (1986). Ghost was Jerry Zucker’s first solo and his first serious film. Although, after such a boost to his career, Zucker only went onto make First Knight (1995), a surprisingly dull run through the Arthurian legends that was a box-office flop, and then reteamed with his brother and Abrahams for Rat Race (2001).

Ghost was an enormous box-office hit and was even nominated for that year’s Best Picture Academy Award. While an enjoyable film, this almost certainly seems overrated. Whoopi Goldberg however deservedly won a Best Supporting Actress Academy Award for her hilarious performance. She is one that makes the film.

There have been two unofficial remakes with the Bollywood Pyaar Ka Saaya (Shadow of Love) (1991) and the Japanese Ghost (2010). Ghost, in particular the pottery love scene, has been parodied in numerous films including Futurecops (1993), National Lampoon’s Loaded Weapon 1 (1993) and 30 Nights of Paranormal Activity with the Devil Inside the Girl with the Dragon Tattoo (2013).