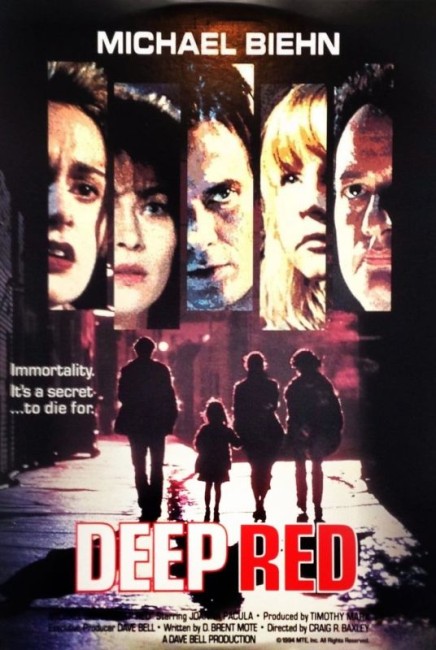 Bodyguard Joe Keyes is hired to protect biologist Warren Rickman. Keyes then finds himself and Rickman being pursued by people searching for ‘Reds’. Reds are artificial nannites inside the bloodstream that make the bearer impervious to damage and preserve age while restoring the body to its youth. However, the bearers of the Reds need to constantly replenish their dose and the search is on for Rickman’s young daughter Gracie, who bears the Deep Reds that can indefinitely sustain the condition.

Deep Red – not to be confused with the Dario Argento film Deep Red (1976) – was the second genre film from former stuntman and second unit director Craig R. Baxley. Baxley made his directorial debut with Action Jackson (1988) and then made the enjoyable sf/action film Dark Angel/I Come in Peace (1990). (See bottom of page for Baxley’s other genre films).

All his other genre material shows Craig R. Baxley with an above-average competence as a director. Unfortunately, the same cannot be said for Deep Red. It certainly starts out with some promise. The story makes a stab at film noir atmosphere with Michael Biehn’s burned out detective/bodyguard hero receiving mysterious assignments from beautiful women. The film holds one intrigued for some time by the sheer strangeness of the proceedings – the pursuing thugs who cannot be harmed by bullets, only fire; the people who are much older than they appear to be; the little girl who is at the centre of the quest and can bend and metamorphose her body. The film keeps one bound to it by the fact that, in its adopting a mystery format, one wants to find a rationalising schema that will allow explanations to fall into place.

Gradually though, it becomes apparent that the film doesn’t have much of an idea what is happening either. Or if the scriptwriter does, they have not done a particularly good job communicating it on screen. The entire script appears to be a lumpen pile of loose ends and abrupt changes of tone. The hero (Michael Biehn)’s detective friend (Steven Williams) is suddenly revealed to be a Red – although it is never made clear if he is a Red or if this is John de Lancie’s sinister scientist having shape-changed because we never see Williams’s character again. Nor are we given any insight into why Steven Williams’s detective, if presumably he is a shape-changed Red, tips off the other detective (John Kapelos) as to Michael Biehn’s whereabouts. John Kapelos’s detective is introduced as having a major grudge against Michael Biehn for having killed his wife and daughter but then after a single sorry he suddenly jumps ship to charge into action alongside Biehn. For no apparent reason, Lisa Collins, as the wife who hires Michael Biehn’s bodyguard in the first place, denies ever having met Biehn before – but we never find out why, because this is never referred to again.

There are wild improbabilities – we learn that scientist Rickman is 65 and his wife 50, yet both have a young daughter under the age of ten. During the credits, a spaceship appears and explodes in orbit and Lindsey Haun is suddenly affected by a cut on the hand – the significance of the sequence is never at all made clear, although by the end of the film we come to realise that this is the source of the Reds, but in terms of plot this has all the clarity of mud.

Within genre material, Craig R. Baxley has also directed Dark Angel/I Come in Peace (1990), the psycho-thriller Under Pressure/Bad Day on the Block (1997), the Christian End of the World film Left Behind: World at War (2005), the rejuvenation film The Glow (2002), the Bermuda Triangle mini-series The Triangle (2005), the excellent tv mini-series The Lost Room (2006) and several fair-to-quite good Stephen King tv productions Storm of the Century (1999), Rose Red (2002), The Diary of Ellen Rimbauer (2003) and Kingdom Hospital (2004).