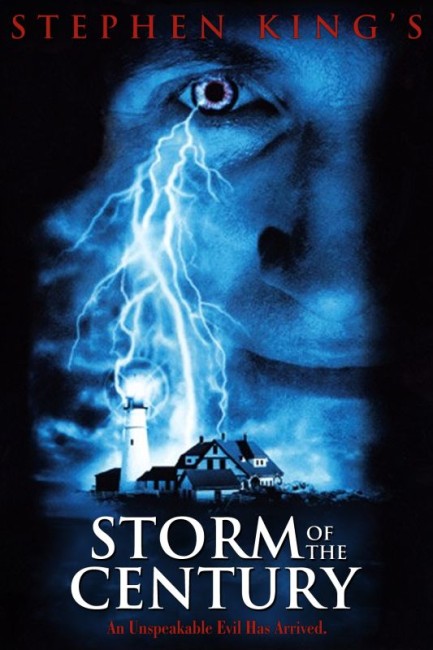 1989. The four hundred people of Little Tall Island off the coast of Maine make preparations as a storm of record severity closes in on the island. During the midst of this, town constable Mike Anderson is called to the scene where an elderly woman has been discovered murdered. Sitting calmly in her house is a mysterious stranger who introduces himself as Andre Linoge. Mike arrests Linoge just as the storm hits the island. However, from within his cell, Linoge exerts a supernatural influence over the town – he somehow knowing and willingly exposing the guilty secrets that every townsperson hides and nobody else could ever know, while also being able to exert mental influence to drive people to kill themselves or others. Near each body is left the cryptic message “Give me what I want and I’ll go away.” As the townspeople finally converge to ask what it is that Linoge wants, they are faced with having to make a truly horrifying choice.

The two most regular interpreters of Stephen King’s works on screen are directors Mick Garris and Craig R. Baxley. The truly dreadful Garris has directed the likes of The Stand, The Shining, the half-King adapted Quicksilver Highway (1997), Desperation and Bag of Bones, as well as the cinematically released Sleepwalkers (1992) and Riding the Bullet (2004), most of which can be counted among the very worst of Stephen King adaptations. At the opposite end to Garris lies Craig R. Baxley. Crag R. Baxley is a former stuntman who started directing with Action Jackson (1988) and went onto the generally modest and effective likes of the action film Dark Angel/I Come in Peace (1990) with Dolph Lundgren against an intergalactic drug dealer; Deep Red (1994) about the search for a child carrying an alien virus; the psycho-thriller Under Pressure (1997); and the Christian End Times film Left Behind: World at War (2005); and other works for tv such as The Glow (2002) about a sinister apartment of immortals; the mini-series The Triangle (2005) about the Bermuda Triangle; and the amazing The Lost Room (2006). Craig R. Baxley has so far directed the adaptations of Stephen King’s Storm of the Century, Rose Red, Ellen Rimbauer and Kingdom Hospital.

Craig R. Baxley might not be the best interpreter of Stephen King out there but has conducted solid and well above average adaptations of King’s work every time he has entered the ring. With Storm of the Century, Baxley and King surpass themselves. In fact, I am fully prepared to call Storm of the Century the best of all the abovementioned Stephen King tv productions made within the 1990s-00s. I would still probably give the overall edge to the very first Stephen King work ever made for tv, Tobe Hooper’s Salem’s Lot (1979), but Storm of the Century would run a close second place.

Storm of the Century, which comes in three episodes of two hours each, was written direct for the small screen by Stephen King. The story closely resembles the one that King told in Needful Things (1991) wherein a sinister stranger, who is possibly The Devil, enters a small town and causes much diabolical mischief with his uncanny ability to know the guilty secrets of the townspeople. One might go out on a limb and call Storm of the Century a better telling of the same story than either Needful Things or its film adaptation Needful Things (1993) were. There often seems a traditional Baptist vision of the world beneath the surface of Stephen King’s stories – Storm of the Century is in many ways about the choices for and against damnation, not to mention the guilty sins that everybody keeps buried beneath the respectable veneer of their public face (a recurrent theme in Stephen King books). To make the point clear, the mini-series comes reinforced with a number of Biblical quotes.

Certainly, the build-up to the main part of the story feels padded at times. It, for instance, takes something like fifteen minutes of screen time to conduct something as simple as moving Linoge from the back of the police pickup through the store to put him in the cell. One has the suspicion that the script could have been trimmed down without much trouble to make Storm of Century a feature film, particularly in eliminating many of the various cutaways to incidents where Linoge drives people to kill others. Nevertheless, Craig R. Baxley does a more than reasonable job in the build-up with Colm Feore displaying eerily sinister effects – fangs, glowing red eyes, the ability to catch bullets shot at him in his hand, and, most disturbingly, the capacity to take people’s dark deep secrets and twist them to make them harm themselves and others. The scene where Colm Feore drives Ron Perkins to hang himself by revealing knowledge of his having beat a gay man is excellent.

The build-up through the first two two-hour episodes would on their own only make for a reasonable but hardly standout show. It is, however, the third part where Storm of the Century comes into its strength – where Colm Feore reveals his plans to the town and forces them to accept a truly terrible Faustian deal. There is some superb writing from Stephen King in these scenes, which are maintained at a high level of tension by Craig R. Baxley. Tim Daly is on fine form in the scenes where he tries to persuade the town not to accept the deal – the gnawing dread as we see him starting to realise that the others are going to accept is nail-biting. The ending the series reaches is grim, horrible and unforgettable. This is followed by an epilogue that shows to haunting effect the fates of the various townspeople and how what happened deeply scarred them. It is this last two-hour episode that makes Storm of the Century.

One of Storm of the Century‘s great advantages is Colm Feore, an American-born but Canadian resident actor. Feore, who is better known for playing anonymous late-fortyish bureaucrats in grey suits, is a surprise choice for the role of Linoge. However, he provides a sinisterly captivating presence with his coldly alien and perpetually smiling menace throughout the first two episodes. Up against Feore, Tim Daly gives a much less intense performance, but carries the lead with an enormous deal of conviction.

The town that is the location of the story is well portrayed, particularly when it comes to the various background characters (a characteristic feature of Stephen King’s works). The attempt to depict a credible smalltown even extends to having coached the cast in authentic New England accents – all “before-wah” and “howev-ah”‘s – the first Stephen King screen adaptation to attempt to approximate the regionality of his regular Maine settings. Even the storm is convincingly portrayed without having to resort to the dramatics of disaster movies, although the toppling of the lighthouse features some slightly hokey model effects.

There are a number of Stephen King in-references throughout Storm of the Century – reference to the fictional King town of Derry, which was most notably the setting for It, while Little Tall Island is also said to be the one where the incidents of Dolores Claiborne (1992) took place.