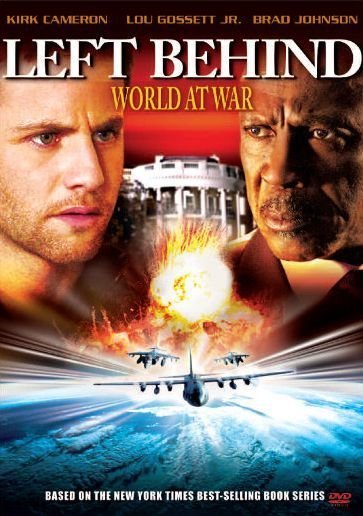 Nicolae Carpathia has persuaded the nations of the world to put down their weapons. US Vice President John Mallory tries to warn President Gerald Fitzhugh that having done so there is evidence that Carpathia is now preparing to start a war. Moments later, Mallory is killed during a terrorist attack on the Presidential motorcade. Meanwhile, the Christian underground is being affected by a mysterious virus. Fitzhugh realises that Carpathia’s assistant Carolyn Miller is one of the Christian underground that tried to warn him before Mallory was killed. He and Carolyn conduct an undercover sortie into a factory where they discover that Carpathia is spraying Bibles with a poison and that this is affecting the Christians. As Buck Williams’ wife Chloe becomes affected by the pestilence while trying to administer to the dying, the others race to find a cure. As Carpathia begins all-out war, President Fitzhugh realises that the only means to stopping him might be his discovering faith.

Left Behind: World at War is the third in the series of films based on the Left Behind books by sports writer Jerry B. Jenkins and Christian minister Tim LaHaye. The Left Behind books, which detail the unfolding events of the Biblical End Times and the rise of the Anti-Christ, extend to 18 novels to date, as well as three ancillary series, a graphic novel and a videogame. The film series began with Left Behind (2000) from Canada’s Cloud Ten Productions. Cloud Ten, run by brothers Paul and Peter Lalonde, both former televangelists, have made a host of Christian-themed films. Indeed, the bulk of Cloud Ten’s films centre around End Times prophecies, with they having produced another entire series of them with Apocalypse (1998), Revelation (1999), Tribulation (2000) and Judgment (2001), as well as the earlier unrelated Vanished (1998).

Left Behind was the most popular of Cloud Ten’s End Times films and gave birth to an earlier sequel Left Behind II: Tribulation Force (2002). One of the notable things about almost all of Cloud Ten’s films is their eagerness to try and reach out beyond the usual Christian audiences to which extent the Lalondes have employed name actors. Left Behind: World at War even went so far as to employ a secular director Craig R. Baxley – see below for Craig R. Baxley’s other genre credits – and managed to obtain a very mainstream DVD release from Sony Pictures Home Entertainment.

In a move that was not exactly commiserate with turning the other cheek against injustices, Tim LaHaye launched a $10 million lawsuit against Cloud Ten after the release of Left Behind for the Lalondes failure to credit him (and Jenkins) and for giving their book a B-budget (instead of A-budget) treatment. With their two subsequent Left Behind sequels, Cloud Ten have strayed widely from the material that LaHaye and Jenkins sketched out in their books. Both Tribulation Force and World at War are based on parts (but not the whole) of LaHaye and Jenkins’ second book Tribulation Force: The Continuing Drama of Those Left Behind (1996) – indeed, World at War is supposedly only based on the last 50 pages of the book.

At best, LaHaye and Jenkins’ works are cheap airport page-turners written for Christians. However, in junking most of their plots, Cloud Ten’s Left Behind films come out slightly loopy. World at War must hold some kind of record as the most ridiculous portrait of the US President in the entire history of cinema. The man is portrayed as a powerless wuss throughout – at one point, he has to go and meekly seek an audience with Carpathia. In some of the silliest scenes, we see Lou Gossett Jr’s President somehow managing to evade his permanent Secret Service escort to sneak out with Jessica Steen first for a little bit of breaking and entering – Nixon at least employed his crew of ‘Cleaners’ to do the job – and then, after being spotted, personally engaging in a shootout. In the next scene, we see Gossett personally preparing to shoot a captured and hooded Kirk Cameron as a test of Cameron’s faith.

In the opening flashback and later in the show, we see Lou Gossett Jr sitting in the White House with the city outside in flames, while Kirk Cameron somehow manages to just walk right in through the door to sit down to pray with him. In almost any real world scenario, at the vaguest hint of war breaking out on US soil, The President would be whisked away to an underground bunker, not left unguarded in the White House with the conflict only a matter of blocks away. By the time we get to the scenes of poor Lou Gossett Jr trying to justify how he avoided shooting Gordon Currie at point blank range and then surviving a multiple-story fall from a window, World at War is well on its way to unintentional hilarity territory.

The plot is all over the place. Despite their employment of known actors and desire to sell to the mainstream, it is hard to find anything in these Cloud Ten films that would appeal to a non-believer. In any secular film, the drama would probably concentrate on issues like trying to seek an antidote to the mysterious pestilence affecting the Christians but instead the film focuses more on Kirk Cameron trying to divine what “God’s will” is. In synopsis, World at War emerges as a completely lunatic film – the Anti-Christ tries to eliminate Christians by poisoning Bibles; the US President turns into a private eye, wields a porcelain handgun to try and shoot an opponent, and at the end becomes a divinely-aided invisible assassin and triggers a satellite to wipe Carpathia out; while the solution to the plague is eventually found in the Christians all drinking communion wine.

There is the underlying belief held by many conservative Christians that if the US disarms its nuclear arsenal then it becomes weak and open to attack by enemies. (This belief was particularly prevalent and often preached from the pulpit during the heyday of Ronald Reagan and the Soviet Union). There is the underlying implication here that Lou Gossett Jr’s President is a weak-kneed liberal who needs to learn to toughen up. These views would be none-too-surprising were Left Behind: World at War a film produced in the American heartland but the oddity about all of this conservative American political ideology is that it comes from a Canadian production company.

A 69 year-old Lou Gossett Jr has clearly come a long way down in his career from the time when he won a Best Supporting Actor Oscar as the marine drill instructor in An Officer and a Gentleman (1982) – indeed, none of Gossett’s subsequent roles managed to live up to the acclaim he received there and his subsequent career has been completely forgettable.

The Left Behind films have all starred Kirk Cameron, the former star of tv’s Growing Pains (1985-92) who is nowadays a Christian minister – he appears on the DVD extras menu here offering up several sermons from his tv show The Way of the Master (2003-4). In his role here, Cameron attempts to play a tough guy with unshaven chin, but no matter how much Cameron tries (and even though he is aged 35), he still looks boyish and far too cute to be a heroic tough guy. By now, Gordon Currie’s performance as the Anti-Christ Nicolae Carpathia has become decidedly campy.

Subsequent to this, the Left Behind series underwent a big-screen Hollywood remake with Left Behind (2014) starring Nicolas Cage. There was also a further film Left Behind – Vanished: Next Generation (2016), which reworked the basics for a Young Adult audience.

Craig R. Baxley premiered with the action film Action Jackson (1988) and went onto to maintain a reasonable career as a genre director. His other films include the witty Dark Angel/I Come in Peace (1990) about an alien drug dealer; the incomprehensible Deep Red (1994) about the search for a child carrying an alien virus; and the psycho-thriller Under Pressure/Bad Day on the Block (1997). Baxley has also made a host of Stephen King tv mini-series’ including Storm of the Century (1999), Rose Red (2002), The Diary of Ellen Rimbauer (2003) and Kingdom Hospital (2004), as well as a variety of genre tv movies including the superhero film Chameleon II: Death Match (1999), The Glow (2002) about a conspiracy of immortals, the mini-series The Triangle (2005) about the Bermuda Triangle and the excellent The Lost Room (2006) about the quest for a series of everyday objects with mysterious powers.